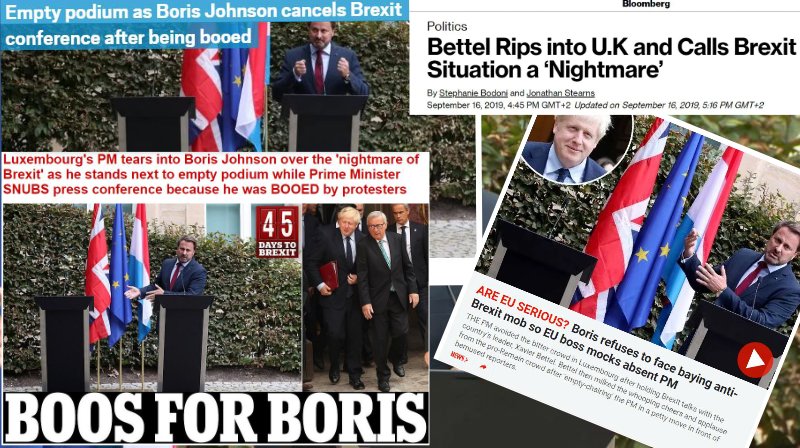 We take a look at how international media covered Bettel and Johnson's press conference yesterday, and give you a chance to voice your own opinions.

Following Boris Johnson's decision not to attend yesterday's press conference alongside Xavier Bettel as had been planned, reactions in international media have been plentiful and varied. See the full speech and a summary of events here.

Gerry Erang opinion: Boris Goneson in Luxembourg: the day the Uncredible Hulk took to his heels

We looked at a selection of reactions yesterday, and have added further ones to the gallery below that have come out since our last reporting.

As evident from the above gallery, reactions to and interpretations of yesterday's events have largely fallen into one of two categories: on the one hand, some view Johnson as the victim of a Luxembourgish and/or European plot to make him look weak. On the other, he was simply unwilling to face the protesters gathered behind the fence separating the courtyard where the conference was to be held from the square on which the protesters had gathered.

The Daily Mail, for instance, led with "fury at Luxembourg PM" and indirectly claim that he had 'stitched' Johnson up by deliberately holding the conference next to protesters and 'humiliating' him by holding the conference alone next to an emtpy podium. Their summary is, in essence: "Mr Bettel refused to move press conference inside and then ranted at Mr Johnson who refused to take part." To put this into some perspective, you can watch Bettel's full speech and Q&A session here.

The Sun reported from a similar angle, saying that Johnson "dodged an "ambush" after EU boss chose to hold their press conference near furious anti-Brexit protesters." They describe Bettel's decision to 'empty-chair' Johnson as "petty", as he "milked the whooping cheers and applause from the pro-Remain mob."

Bloomberg focused more on Bettel's speech — "Xavier Bettel of Luxembourg launched into a full-throttle attck on Boris Johnson's government" — and less on the fact that Johnson decided to dodge out of his appearance. A similar approach was taken by Politico who note that Bettel "lambasted the U.K. prime minister for not putting forward a concrete alternative to the Withdrawal Agreement in writing."

The Guardian's John Crace, meanwhile, concluded that Johnson "as completely owned by about 50 unthreatening protesters," and "imploded under the weight of his own narcissism." This was in an opinion column, mind, while their reporter in Luxembourg concluded in less strong language that Johnson was "humiliated by Luxembourg PM at 'empty chair' press conference," leaving him "humiliated and his claims of progress in the Brexit negotiations in tatters."

Given the split views on how the event unfolded, we'd like to hear your opinions on the matter. Feel free to vote in the below poll, and leave a comment below the article if you've got more to say - or if your view isn't reflected by one of the poll options.