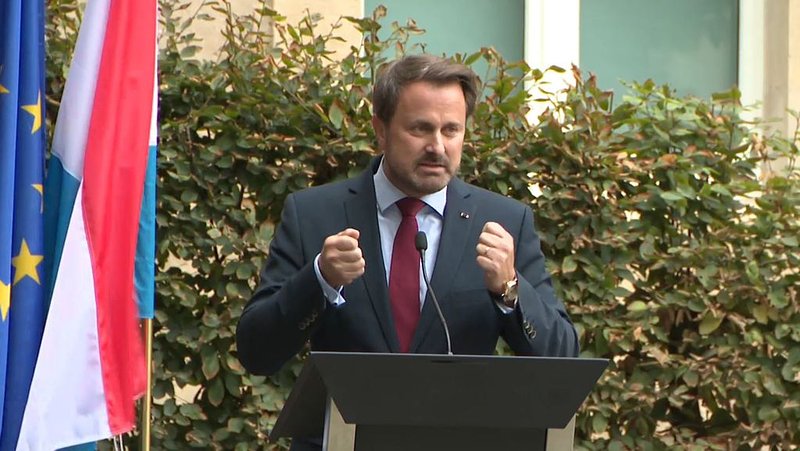 British Prime Minister Boris Johnson has arrived in Luxembourg to meet with the President of the European Commission, Jean-Claude Juncker.

This article was updated throughout the afternoon, with newer information appearing at the top of the article.

Bettel, alone at the press conference following the meeting, started by thanking Johnson for the meeting — while pointing to the empty stand next to him, where Johnson had been supposed to be — and noted that while protesting is important, and a right, it's also important to listen to all sides. In his speech, Bettel noted that extensions for the sake of extensions were not an option.

Further, Bettel stated that people - both the British and Europeans at large - need clarity on what is going to happen on 31 October, and that 'you can't hold a future hostage for political gains.' Further, that the clock is ticking, and responsibility for progress lies with Johnson. The Irish border and backstop issue was also at the centre of his speech and subsequent answers.

Asked about withdrawal agreements, Bettel answered that there was but one agreement in his mind - the one currently on the table, that the UK has opted not to accept.

Bettel placed considerably emphasis on the need for clarity, and a stop to uncertainty - both for European citizens living in the UK, and vice versa.

In a passionate answer to one question, Bettel called out lies by leave campaigners, saying that before Brexit voters had been told they would get money back, that Brexit would happen within 24 hours, but no one called out their lies.

The Prime Minister also said he will not take responsibility, nor should the EU, for what is a home-grown (UK) issue and the 'mess we are in at the moment'.

Video of the speech

Our mobile journalist recorded the speech, which you can view below. Do note that this does not include the questions and answers which followed the speech, and therefore does not reflect all of the above summary.

Interview with a protester

RTL Today's mobile journalist, Gerry Erang, conducted an interview with David Pike, one of the protesters awaiting Johnson's arrival earlier today. You can see the interview in full here.

Further protests as Johnson arrives to the meeting

Crowds of protesters awaited Johnson's arrival, which was accompanied by loud demonstrations.

Not a great welcome for Boris as he arrives to meet Luxembourg PM. Presser outside should be interesting with current acoustics pic.twitter.com/SLVq8rs7oF

Several protesters had gathered outside the restaurant in anticipation of the delegation's exit.

An outline of the visit

On the Prime Minister’s schedule today is a lunch with Jean-Claude Juncker in the presence of the chief negotiator for the European Union, Michel Barnier, as well as a meeting with the Prime Minister Xavier Bettel and a press conference at 3.15pm. RTL Today will be live streaming from the conference.

Jean-Claude Juncker clarified during the weekend that no other agreement would be negotiated and criticised the British for not having proposed alternatives.

In position for Bojo, aka the incredible Hulk. Everybody‘s scared pic.twitter.com/yyLOmGzBWG

In the event that the two parties do not agree, Johnson has stated that this will result in a no-deal Brexit come 31 October — an option which does not have the backing of the British Parliament, who would prefer another deadline extensions, which Johnson has ruled out.

Prior to Johnson's visit, Xavier Bettel has stated that there will be no alternative to the extant Brexit agreement, nor a new deadline.

The problem of the Irish border remains, however, as a no-deal Brexit presents no solution to the "backstop".

The European employers' organisation,  fears that a no-deal Brexit would be catastrophic, and calls for efforts from both parties to reach an agreement through constructive dialogue.

Upon arriving in Luxembourg, Johnson expressed 'cautious' optimism about progress in Brexit talks as he meets with EU leaders. Juncker, meanwhile, answered a question as to whether progress towards a deal has been made with a short and simple, "we'll see."