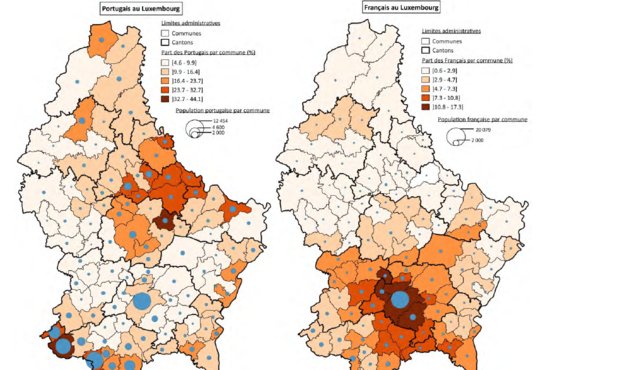 The latest article analysing Statec's demographic at last revealed that foreigners account for nearly half of the Grand Duchy's population. We'll now take a closer look at the non-Luxembourgish populations, revealing which communities are most-represented in Luxembourg.

For the past few decades, immigration has been the main cause of the country's demographic growth, contributing to 80% of Luxembourg's growth.

Luxembourg's population is now made up of citizens from a staggering 170 different countries. The immediate questions evolving from that fact are which communities are most-represented in Luxembourg and where were Luxembourg's residents born?

Following on from the latest census data of 1 January 2018, the French follow the Portuguese as the third largest community with a total of 46,000 residents (7.6%). They also make up nearly 16% of the foreign population.

After the French come the Italians, Belgians, and the Germans in that order. In terms of non-EU citizens living in Luxembourg, Montenegro leads the rest with 4,000 citizens residing in the Grand Duchy.

The largest African community residing in the Grand Duchy is the Cape Verdian one. The American and Chinese communities living in Luxembourg represent the largest groups from their respective continents. Only 223 residents are from Oceania/Australia.

Finally, 171 people are qualified as not having any citizenship and a further 229 have a nationality which is unknown.

Where do the foreign populations live?

As for the distribution of Luxembourg's foreign residents, the largest community - the Portuguese - predominantly settle in the southwest of Luxembourg as well as in Larochette and the Nordstad area (which encompasses fifteen municipalities in the Diekirch canton as well as some in the Mersch canton and Vianden canton).

French citizens live in an around the capital and Italians live in both the capital and in the Minette area. Belgian citizens are mainly based along the Belgian border and the Germans are based in the east and southeast of Luxembourg. The largest proportion of non-EU citizens live in Wiltz, making up 8% of the population there. After Wiltz, they tend to live in Rumelange and Schifflange.

African communities mainly tend to settle in Wiltz and some Nordstad municipalities as well as Bourscheid. Statec's statistics reveal that the most residents with African citizenships live in Luxembourg City, in Esch-sur-Alzette, and in Differdange.

Americans have settled in and around the capital, notably in Strassen and Bertrange as well. Contrary to other communities, Americans do not tend to move to the north of the country.

Asians as well seem to live in Luxembourg City and the immediate surrounding area, much in the same municipalities as American citizens. However, unlike Americans, certain northern and eastern municipalities have relatively high proportions of Asian residents, notably Esch-sur-Sûre, Bourscheid, Diekirch, Berdorf, and Beaufort.

Born in the Grand Duchy or abroad?

53% of Luxembourg's total population was born in Luxembourg. Amongst the foreign residents, those who are older than 20 years are likely to have been born elsewhere, although Statec highlighted that it is difficult to generalise.