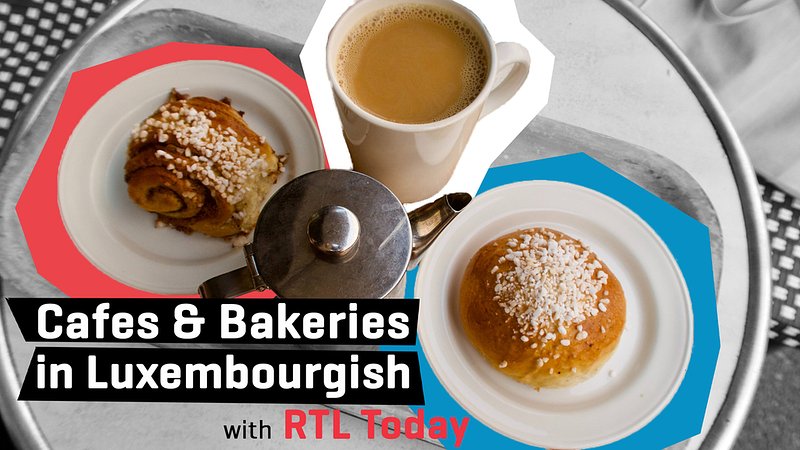 A cup of coffee and a tasty pastry help numerous people to get their gears going just that little bit easier in the morning.

But how do you actually order at a Luxembourgish bakery or café? Let's find out all about it in this lesson!

Hello and welcome back to your favourite Luxembourgish Crash Course (if you've followed along for seven lessons, we can only assume that we're doing something right…)

In the last lesson, we went to the supermarket to stock up on some groceries and made our first, tentative steps to navigate our way around the Luxembourgish retail world. However, while you could technically get away with a hastily whispered Moien and Äddi at the supermarket, a bakery usually requires you to somehow communicate what it is you want to the person behind the counter.

Before we dive into the phrases, we should take a closer look at bakeries in Luxembourg: What do they typically sell? What are some seasonal treats worth checking out? And why is absolutely everything in French?

What can you buy at a Luxembourgish bakery?

Luxembourgish bakeries will often have a sign that says "boulangerie", already foreshadowing that the Grand Duchy's baking tradition is very closely related to that in France. As such, you will find a lot of typically French baked goods and pastries, including croissants, baguettes, pains au chocolat (a type of sweet roll with two chocolate sticks inside), and all sorts of little tartes (often fruit pies).  Most of the time, Luxembourgers will just refer to them by their French names, with the exception of the pain au chocolat, which is often referred to as Schockelaskichelchen ("chocolate biscuit").

If you want to try something typically Luxembourgish, give the Aachtchen ("little eight") a go. The Aachtchen consists of puff pastry in the shape of the number eight and two vanilla pudding fillings.

There are also some baked goods that are usually only available during certain periods of the year.

The first that comes to mind is of course the Bretzel (or Bratzel, as it is referred to in eastern Luxembourg). These tooth-achingly sweet pretzels, which are usually covered in almonds, are of course tied to the Luxembourgish tradition of Bretzelsonndeg and usually serve as a gift between lovers. Similar pretzels are also commonly sold around the time of St Martin's Day (Mäertesdag in Luxembourgish).

The so-called Verwuerelter or Fueskichelcher are only available during carnival season (Fuesend in Luxembourgish) between January and February. Fueskichelcher are made out of a similar dough as doughnuts, but are shaped like little knots and covered in powdered sugar. You usually buy them in dozens.

The so-called Quetschentaart, an open fruit tart with prune plums, is another staple. Traditionally, it is only available during autumn and usually served with some whipped cream during afternoon coffee.

Another seasonal baked good is the Boxemännchen. The sweet dough in the shape of a jolly little man is particularly popular with children, as it is traditionally one of the gifts distributed by the Kleeschen (St Nicholas).  In the past, they were usually only sold in the week leading up to St Nicholas' Day (6 December), but the time frame has since been extended. Nowadays, the Boxemännercher appearing at your local baker's are one of the first signs that the holiday season is approaching.

Good to know: Luxembourgish is a bit peculiar when it comes to breakfast. The phrase Kaffi drénken literally translates to "to drink coffee" and it can have that literal meaning. However, if a Luxembourger wants to say "to have breakfast", they would also say Kaffi drénken. So, if a Luxembourger tells you Ech hunn haut de Moie Kaffi gedronk, it usually means they've had breakfast and not just a cup of coffee. Similarly, the Luxembourgish word Kaffi can also mean "breakfast" or even a light meal in the evening.

When it comes to phrases, you will use and hear a lot of the same ones we discussed in our lesson on chatting with the supermarket cashier. Since you'll likely also be standing in front of a display when ordering, you can always resort to pointing to the goods you would like. On the other hand, most cafés and bakeries offer the possibility to consume their goods at a table, either outside or indoors, so you may want to know these phrases:

Oh, and while we're at it, let's help you get your coffee order right:

Good to know: When ordering at a café / bakery, you will have the usual options (cappuccino, latte, latte macchiato…) , just keep in mind that the names will likely be in French (i.e. café, café crème, café au lait…). Another thing you should know is that if you simply order Ee Kaffi, whether at a bakery or in a restaurant at the end of a meal, you will almost all of the time receive an actual "cup of coffee" and not an espresso. This is different to Luxembourg's neighbour France and nearly all of the southern European countries, where "a coffee" always equates to an espresso. If you want an espresso in Luxembourg, it is best to say Een Espresso, wannechgelift.