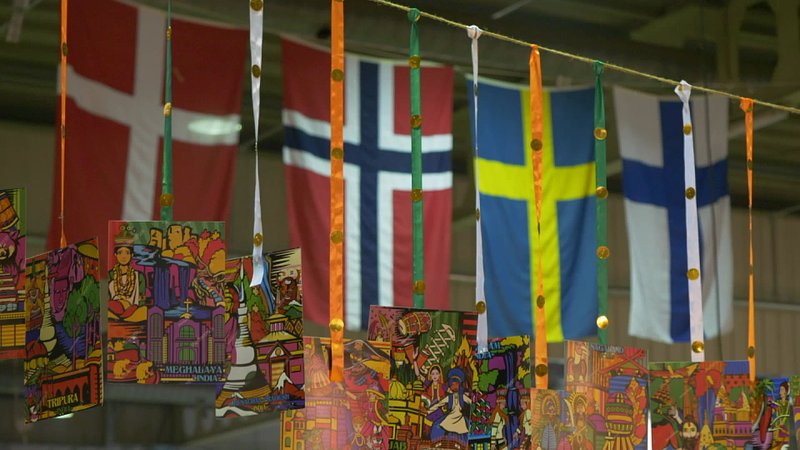 The Bazar International de Luxembourg, which has been around since 1960(!), is returning to Kirchberg after being cancelled last year due to Covid.

A firm favourite with locals and expats alike, the Bazar International de Luxembourg has been a fixture of the Grand Duchy's cultural and culinary scene for decades. Every year, hundreds of volunteers come together to celebrate Luxembourg's diversity, and raise money for charity work across the world.

If you want to know more about the Bazar International de Luxembourg a.s.b.l, check out our Knowledge Bite article, our RTL Reports video from 2019, and of course the official Bazar website.

While many of us know the Bazar International as the place to go for authentic cuisine (and excellent Christmas gift shopping) from around the world, what is perhaps less widely known is that the event is planned, organised, and run entirely by volunteers. From the board who organise the event to the members of each individual stand, everyone involved with the organisation is volunteering their time and skills to do so.

It takes about 1500 volunteers.

Carmen Decalf, President of the Bazar International: “It takes about 1500 volunteers to get the Bazar together, to build each individual stand, decorate them, buy products to be sold, prepare foods, organize tombola's, work in the stands during the Bazar and take down the stand afterwards, etc. The preparations start at least half a year in advance for most stands and turns into a full time job as the event draws nearer."

Profits made from the event are funnelled directly to charity - members of the Bazar International nominate charities to receive some of the funds raised during the weekend event, which are then rigorously evaluated by the executive committee before being approved by the full steering committee, to ensure that the funds go to charities that have a real social impact and the ability to manage the funds appropriately.
Decalf: "Most of the beneficiaries are organisations based in Luxembourg, Europe, Asia, Africa and Latin America. Priority is given to empowering children and women through safety, education, vocational training and medical care. Charities are selected based on the impact they have on their communities, amongst other objectives."

In July of 2020, we reported that the event unfortunately had to be cancelled that year due to the coronavirus pandemic. It was unclear if the Bazar, which traditionally brings together thousands of people at LuxExpo in Kirchberg, would be able to go ahead this year until just recently - though they have organised other, smaller, events in the meantime.

Speaking to RTL Today, members of the IBL steering committee noted that the final decision to return this year was not one made easily. Decalf: “The safety of both volunteers and visitors is one of the most important aspects this year. This required smaller numbers but as our goal is to raise money for charities, we had to make sure that we would raise enough money to cover all the costs involved  (location rental, security, sanitation, etc.) while still generating funds for our selected charities. Covid has been hard on many people, but charities have suffered considerably as funding dropped steeply in many cases. It is one of the reasons why we decided to do the Bazar this year and it is what keeps us going.”
In 2019, the Bazar International de Luxembourg raised €600,000 for 73 charities in 49 countries. The committee does not expect to raise the same amount this year. However, they have been vigilant in reducing the costs to optimise the profit for charities.

The issue of safety still remains, as Covid is still with us, with all the challenges it poses for large-scale events of any nature. This unfortunately means that not all stands that we traditionally see at the Bazar will make a return this year; some have struggled to secure their supplies at relatively short notice.

But the good news is that most will! You can find a full list of the stands that will be at the 2021 Bazar right here.

This year's edition will be a CovidCheck event, and unlike other years, visitors will have to book a 3-hour visiting slot ahead of time through the Bazar website.

Supporting the Bazar - we'll be there - will you?

We're big fans of the Bazar here at RTL Today, and we are ridiculously excited to be their official media partner as of this year (more on this to follow - but suffice for now to say WOOOHOOO, YEAH!). We will be there throughout the weekend (again, more to follow, but suffice to say.. you get it!) and we hope to meet lots and lots of our lovely readers there.

We have lots of cool content coming as the Bazar draws closer, so stay tuned for that. For now, we'd love to know if you're planning to go. We've offered to help the Bazar get a bit of an idea of who might be going, so if you have 5 seconds to spare.. we'd be grateful if you could answer four short questions below (anonymously, of course!). Thanks, and see you at the Bazar!