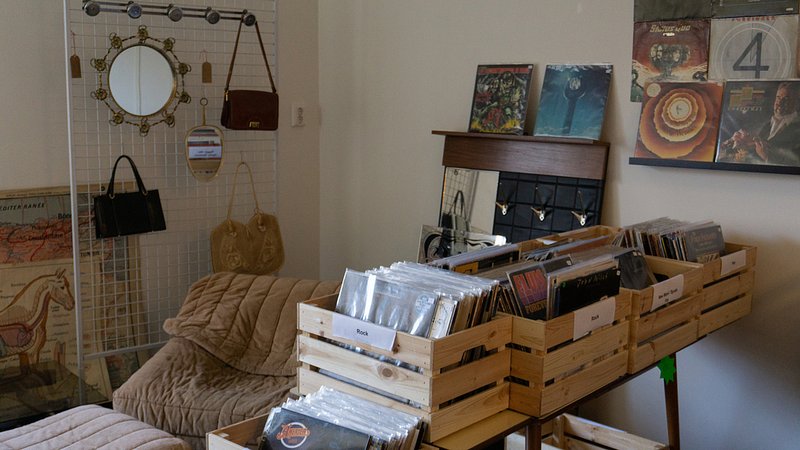 Located in Gasperich, Oddhaus Vintage is a vintage furniture shop for those who search for alternative styles from the so-called mid-century era.

The face behind the shop? Alina. The young woman with Russian roots moved to Luxembourg in 2011, after living in the Netherlands for six years. We sat down with her to discuss the Luxembourgish furniture market, the challenges of being a one-woman show and the appeal of shopping second-hand.

How did you come up with the idea for ODDHAUS VINTAGE?
When I moved to Luxembourg, I was working at a research institute where the majority of my job was focused on recycling and circular economy, so I was always interested in that sort of thing. But I never really saw myself as an entrepreneur. The concept was more born out of necessity. When I was looking for furniture for myself, I couldn’t find anything that I liked and that was within my budget, so I started looking into second-hand and vintage furniture from abroad because there wasn’t really anything like it in Luxembourg at the time. I figured there’s a business opportunity there. Also, I really like doing it, so it’s like making a living from a hobby. What about the name?
It took me about 6 months to come up with a name. I wanted the name to reflect what I’m selling: a mix of things that are considered a bit unusual, eccentric or odd, and furniture that’s inspired from the Bauhaus school which, back in the days, was considered the most cutting-edge, modern design out there and has still proven itself to really be timeless. Our whole concept is for people not to feel like they’re living in the past but to incorporate those mid-century pieces into their everyday life in order to bring in something that has personality and gives an extra touch to your home.

What's the hardest thing for you to source?

It’s not really that there’s things that are hard to source per se, but it’s more that things come in cycles and there’s no predictable pattern to it. I had a phase where I had about 10 desks and they all sold - now, I don’t have any in-store, but I currently have lots of sideboards instead. I think it’s also a very different shopping experience for customers because you have to be flexible and can’t decide in advance on all the particularities of a piece you’re looking for. When you see something you like, you kind of have to jump on it straight away because they’re usually one-of-a-kind pieces and I don’t know when or whether I’ll have something that’s comparable back in store.

What's the best piece that you've ever acquire?
I’ve had several favourites and even one or two that I regret selling (laughs) - for example this amazing vase from a West-German ceramic company called Ruscha which I wish I had kept, and there were a couple of lamps I regret selling, too. But it’s an ongoing process. You see something amazing, then you sell it on and you know that it’s going to a good home so it’s okay. What do you think makes vintage and second-hand furniture so special?

There’s the whole psychological aspect of it. Usually, people like that the piece already has a story attached to it. But in terms of practical aspects, I think that you can’t compare the quality of the materials and the craftsmanship of the pieces with anything that’s on the market nowadays. You can’t imagine an Ikea table to last for 50 years, can you? Well, the pieces we have here have 50, 60, some even 70 years under their belt and still look like new, except for the occasional scratch and mark. It’s great to think that you can buy a vintage piece for less than a new one and it’ll last you a lifetime.

What’s the biggest challenge about owning your own shop?

Obviously, it’s really hard to find a space that you can afford in Luxembourg and that still corresponds to your criteria. Part of my concept is that I want to be accessible for people who don’t necessarily have a car, but still want to browse through the shop. So Luxembourg-City was the ideal location but I also need a pretty big space to fit in all the furniture. Finding a place that fits those needs and isn’t breaking the bank account is really hard.

Then, there’s the personal aspect of running a business. I had a baby recently and, since I’m a one-woman show, it can get hard to keep everything up-to-date, which is why the website has suffered a bit recently (laughs).

How has the process of selling vintage furniture changed over the past couple of years?

I think people are more aware of the fact that the things they own have value and that someone is interested in them, so they also try to get a bit of money for them instead of throwing them away, which is why the prices have increased a little since I’ve had this shop. In terms of the Luxembourgish market, I think that the environmental awareness has increased a lot and I like to think that we did our part in showing people that vintage is not “all gross second-hand stuff”.

Can you name something you’re really proud of having in-store right now?

I always buy for my own taste so basically, everything I like is here (laughs). If I had to pick, I’d probably go with the sideboards because of the amazing craftsmanship, or this golden bar trail. I also have a few lamps that are in the back because I haven’t made up my mind yet if I want to sell them or not.

Oddhaus vintage
© Valeria Wiwinius / RTL
The photos published on this site are subject to copyright and may not be copied, modified, or sold without the prior permission of the owner of the site in question.
Most read
More news