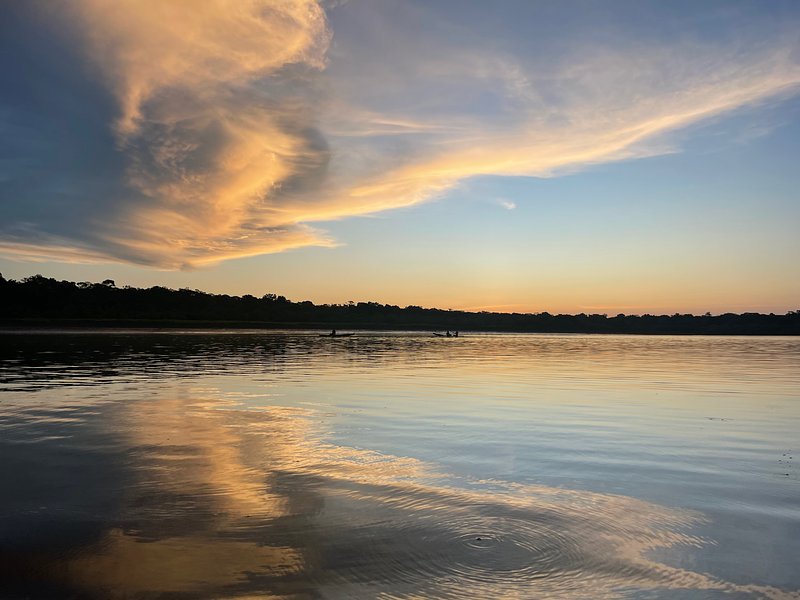 Majestic: kayaking with dolphins on the Yavari River, a tributary of the Amazon / © Hedda Roberts

RTL Today’s Tom Tutton opens his new series, the South America diaries, with a journey into the Amazon.

The sun is close to setting, and I’m in a kayak with my partner in the middle of a vast river. A sea of trees bursting with fruit and bird nests lines the bank on both sides as we set down our paddles, worn out from a losing battle against the powerful current.

That’s when we start to hear them: little splashes behind our backs, causing us to swivel sharply and almost capsize our boat in the process. Suddenly, the water around us seems alive, and I begin to feel like I’m surrounded.

"Are they piranhas?," Hedda asks, her voice betraying her own sense of unease. The kayak doesn’t seem as sturdy as it did five minutes ago.

Another sound, to my left this time, catches my attention, and I get a glimpse of something as it disappears under the surface, leaving ripples in its wake.

"I don’t think so," I answer, more out of hope than of conviction.

And then we see them. One, and then another, and then a whole group of them – or actually a pod, to be precise.

All around us, dolphins with long snouts emerge from the river in pairs, their pink backs arching as they dive back under the water.

It’s a magical experience that goes on for half an hour, and all we can do is watch as we float down the Yavari River, the skies above turning orange. 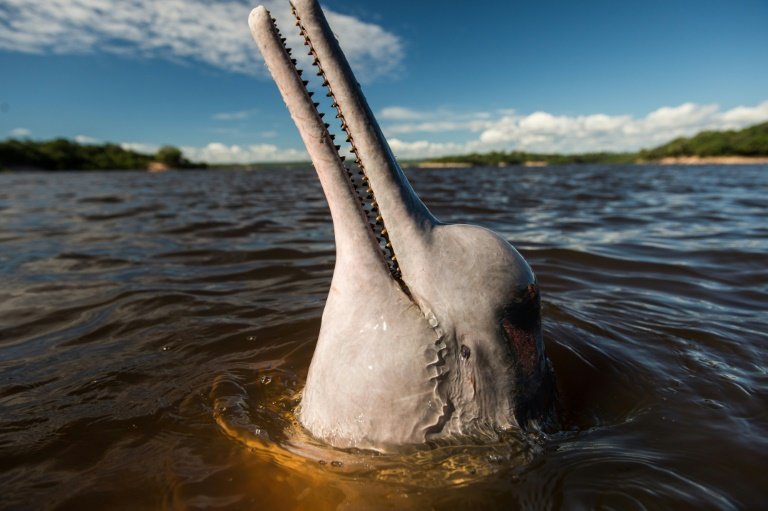 An Amazonian river dolphin. It's not my picture, because phones and kayaks don't mix too well. / © AFP Archives

We’re ten days into our trip to South America, and we’ve come to visit one of the planet’s last great wildernesses: the Amazon.

The journey here isn’t exactly straightforward. First, we need to get to the Colombian border town of Leticia, which lies in an odd parcel of land between Peru and Brazil. It’s isolated from the rest of the country by thousands of square miles of jungle, and that means the only way it can be reached from Colombia is by air.

Due to its strategic position on the banks of the Amazon River, Leticia was once the source of a short war between Colombia and Peru in the early 1930s, which was eventually ended with the help of the League of Nations. Now, though, it’s mainly known as a gateway to the rainforest, with most tourists, including us, passing through quickly on the way to other destinations. 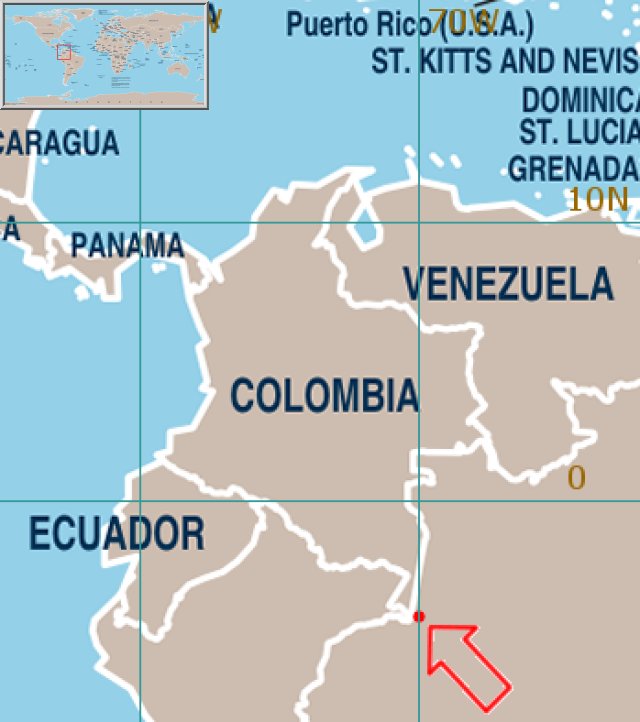 Leticia, capital of the Colombian Amazon, is sandwiched between Peru and Brazil. / © worldweather.wmo.int

To get to our lodge, which is actually in Brazil, it’s a spectacular five-hour boat ride across the Amazon River and up the Yavari, one of its tributaries in the region.

It takes about half an hour just to cross the Amazon itself. Even in low season, it’s so wide that you can barely make out the other side, and our barge feels minute in comparison.

Along the way, we pass small villages made up of houses on stilts perched off the river, and as night falls, an electrical storm forms above us, filling the skies with a dramatic show of thunder and lightning. 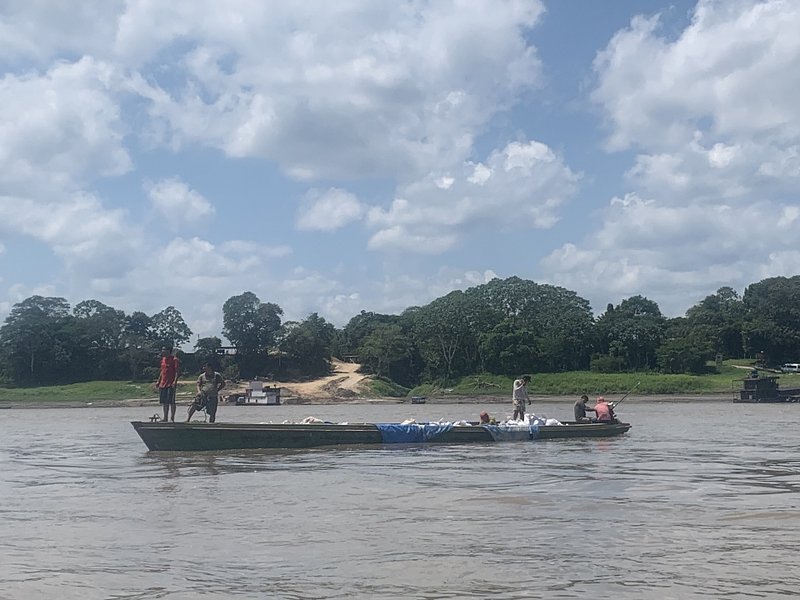 Our lodge is a rustic, but beautiful grouping of wooden huts overlooking the river. There’s no hot water, but it’s not like you’d need it: it’s the dry season, which means it’s about 33 degrees all day, with humidity hovering around 100%. On the plus side, that means that there are hardly any mosquitoes about either, which we’re extremely relieved to hear.

On our first morning, we’re introduced to Tuki, the lodge’s resident toucan, as well as the local blue-and-yellow macaw, who is able to turn water taps on and off with her beak whenever she’s feeling thirsty. Both are being treated for injuries to their wings and will eventually be released, but in the meantime, they’re a comedy duo, hopping about like they own the place and nipping at unsuspecting heels. 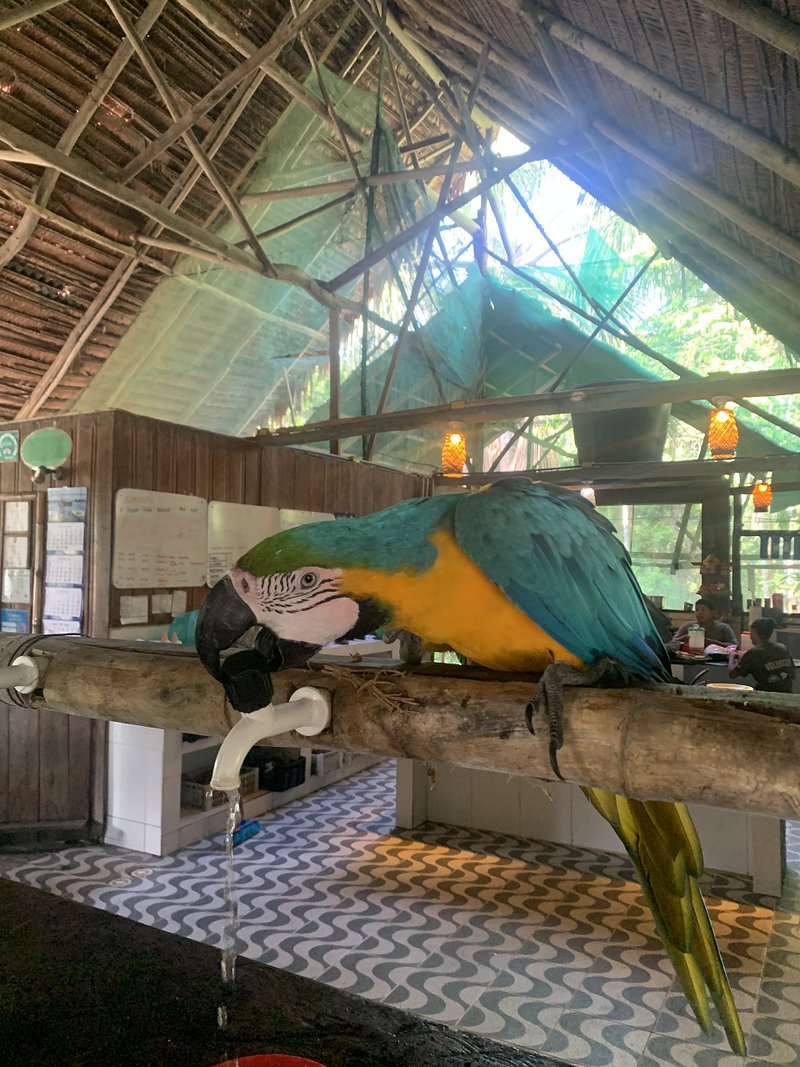 Later that day, we head off on our first outing into the jungle, led by our guide, Ká. The flora is spectacular, with huge trees dominating the landscape and brightly-coloured flowers blooming on all sides, while crickets provide the loudest chirps among the cacophony of natural sounds.

There’s not much in the way of animals, though: this being the dry season, the monkeys, tapirs and jaguars retreat deeper into the jungle, making them difficult to spot. Eventually, we do come across a pair of mammals mating in a natural pool; but unfortunately, they’re humans – it’s some fellow guests, enjoying their time in the Amazon a little too much. Our guide is less than impressed, so we try to suppress our giggles.

Other activities at the lodge include a walk to a gigantic ancient tree – which sounds underwhelming at first, until we realize it’s more than 600 years old, considered sacred by locals, and really absolutely enormous – and a visit to a Peruvian village on the other side of the river. 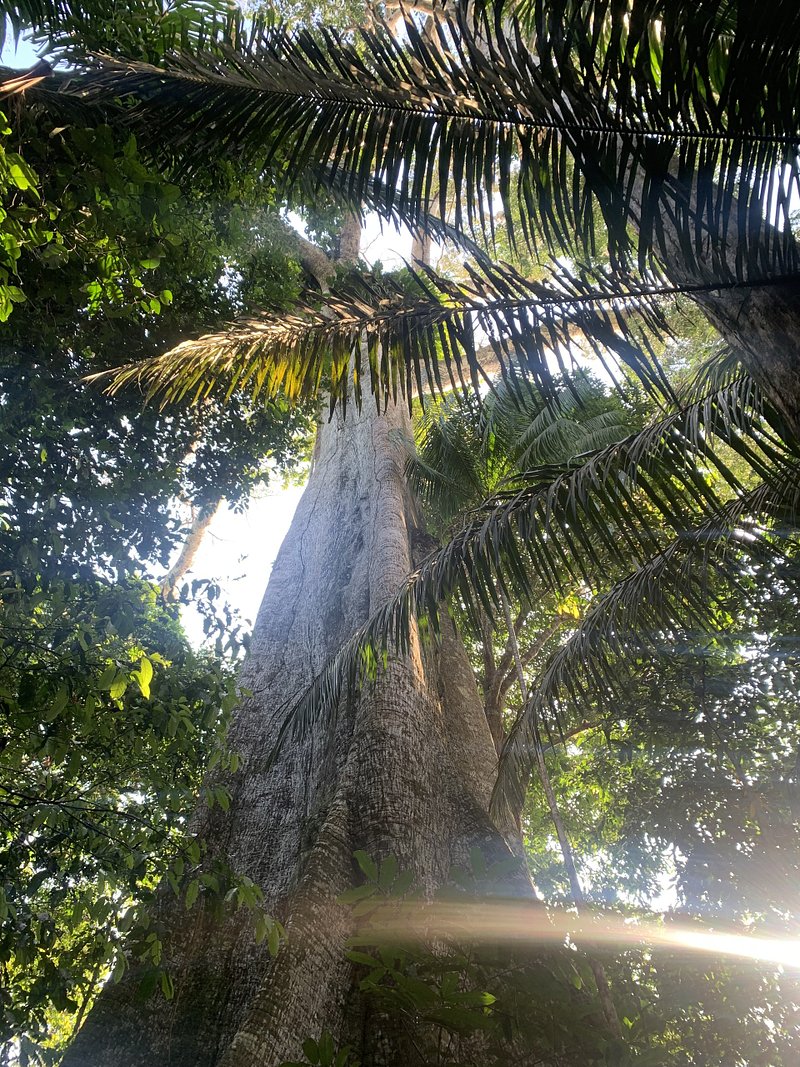 A rather large tree / © Hedda Roberts

The real action, though, takes place on the boats, with a rod in hand. Neither my partner nor I have ever showed much interest in fishing, but here in the Amazon it’s a different matter entirely. As soon as the bait hits the water, it’s attacked on all sides by a gaggle of piranhas with teeth that look like daggers. It's best not to fall into the water, our guide helpfully suggests, as the piranhas really do bite.

It takes a little while to get the hang of it, but after a few tries (and a dozen bits of lost bait) we manage to catch a few of the little beasts, their jaws still baying for our blood until Ká unceremoniously finishes them off. 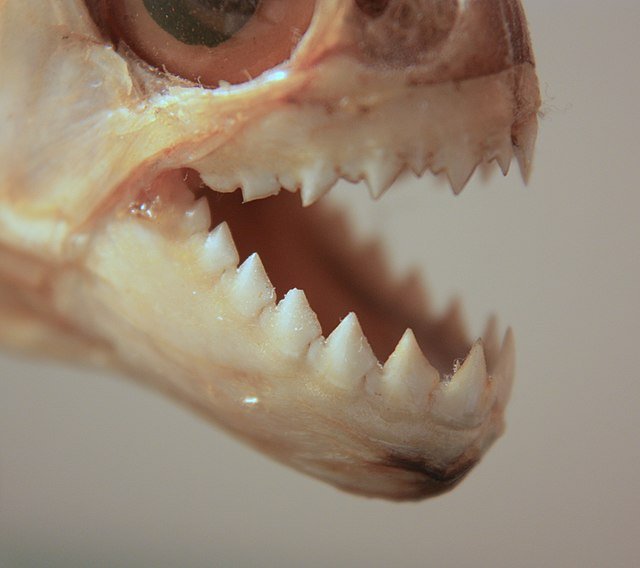 Later that evening, we barbecue our catch on the beach, as Ká tells us about life on the river, regaling us with tales of his adventures deep into the jungle.

It’s not all positive, though: while this area is not threatened by deforestation due to the presence of border police, the seasons are already changing noticeably due to climate change, he says. And Brazil’s far-right President Jair Bolsonaro, with his constant attacks on indigenous groups, has left many of the region's most vulnerable populations open to yet more exploitation - even if he does lose his re-election battle later this year.

As we leave after an incredible stay in this wild environment, we reflect on how privileged we’ve been to witness it while it’s still whole. The future of the Amazon is absolutely central to the fate of the planet, and we can only hope that political leaders recognize that fact as soon as possible.