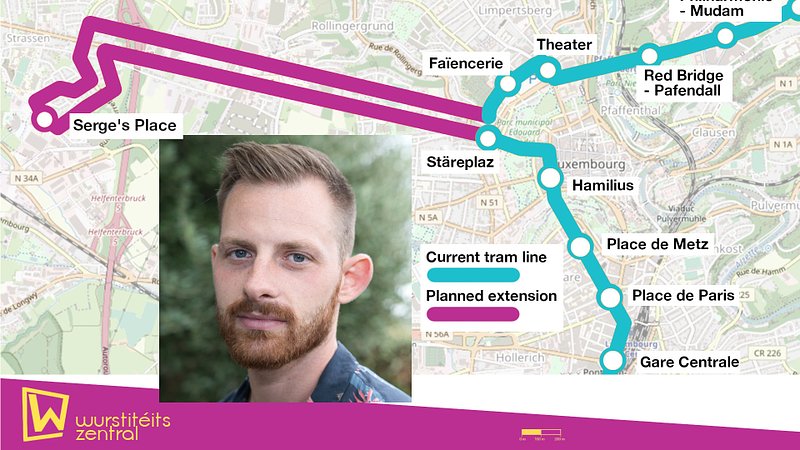 The extension will add 7.2 kilometers and 12 minutes to the normal route, which will be an inconvenience for everyone except the guy, officials admit. / © J. P. Gomez / iStock

Transportation officials have announced they will extend the tram line to an apartment in Strassen because the guy who lives there is always late.

“This guy is never on time for anything, and frankly, we’re fed up,” said Ministry of Mobility and Public Works spokesperson Aristotle Kirkandian. “We don’t see any other solution.”

Between the Faïencerie to Stäreplaz stops, the tram will now be diverted to a newly built stop called Serge’s Place on rue du Cimetière, directly in front of 27-year-old Serge Langrouve’s apartment.

The extension will add 7.2 kilometers and 12 minutes to the normal route, which will be an inconvenience for everyone except Langrouve, officials admit.

“Some passengers will be unhappy,” Kirkandian said. “Yes, it’s a lot for just one guy, but if you knew him, you’d understand. He’s a total mess.”

“He’s always got some excuse about bad traffic, confusion over the bus schedule, or how his car wouldn’t start,” Formiguera said. “One time, we missed an 8:55 flight to Mallorca because he showed up late, and he wanted me to believe that for some mysterious reason, his iPhone had switched to UK time during the night.”

Langrouve’s boss Ingrid Pervoy says that in two years, the young man has never been on time.

“He’s always between 15 to 20 minutes late, never more, never less,” she said. “At least he’s very punctual in his lateness.”

Officials say they are optimistic the plan will work now that Langrouve will only have to step out of his front door to catch the tram to his job in Kirchberg or to the city center where he often meets friends for drinks.

“We’re also planning on building a mobility app just for him, one that wakes him up in the morning, tells him when to finish his shower, and sounds an alarm the second he needs put on his shoes and leave his flat,” Kirkandian said.

When told about the project, Langrouve expressed gratitude and delight, saying that now he will be able to enjoy an extra 15 to 20 minutes of sleep every morning.