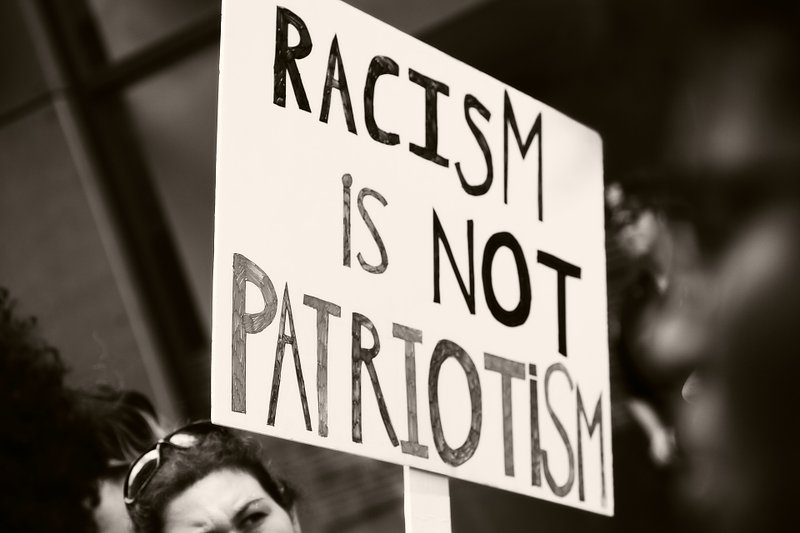 The police killing of George Floyd, an unarmed African-American citizen, has sent shockwaves around the globe with protests and demonstrations even finding their way to Luxembourg. Rightfully so, but the Grand Duchy also has a racism problem of its own, argues Gerry Erang in this opinion article.

Unarmed African-American citizen George Floyd passed away after a white police officer knelt on his neck for nearly nine minutes, blatantly ignoring the impassioned pleas of bystanders to get off the lifeless body of the victim. The shocking incident, which was caught on camera and widely shared on social media, sparked violent riots in the US and demonstrations around the globe. The fury in the US is rooted in a long history of racist police brutality, violence, and inequality.

But systemic racism is a problem not exclusively plaguing the US - it also has many hidden faces in Europe, and Luxembourg is no exception to the rule. What is different, however, is that racism in the Grand Duchy is often far less overt than in Northern America. Most importantly perhaps, it remains a taboo that rarely finds its way into public and political discourse.

As you may remember, a conference debate on "being black in Luxembourg" took place on 13 November last year. Discussions revolved around experiences of discrimination and hate crime of people of African descent in the Grand Duchy. The conference reiterated findings that were already published in an extensive report entitled “Being Black in the EU” that was published in 2018.

The results were sobering, and exemplified that the experiences of black people often dramatically differ from the image of social inclusion and multiculturalism that Luxembourg projects to the outside world. Overt and mainly covert forms of racism have been far from eradicated in Luxembourg.

The damning report was published by the European Union Agency for fundamental rights. It analysed the responses of 5,803 immigrants and descendants of immigrants of African descent surveyed in 12 Member States: Austria, Denmark, Finland, France, Germany, Ireland, Italy, Luxembourg, Malta, Portugal, Sweden and the United Kingdom.

The report for instance found that, in the five years before the survey, some 5% of respondents experienced what they perceived as racist violence (including assault by a police officer). The highest rates were recorded in Finland (14 %) and in Ireland and Austria (both 13 %), followed by Luxembourg (11 %).

39 % of respondents of African descent felt racially discriminated against in the five years before the survey. One in four (24 %) felt discriminated against in the 12 months before the survey. The highest perceived rates of discrimination in the 12-month period are found in Luxembourg (50 %), Finland (45 %), Austria (42 %) and Denmark (41 %). Skin colour is the most commonly mentioned ground of discrimination, with the highest rates observed in Luxembourg (53 %), Austria (45 %), Germany and Italy (37 % each). Ethnic origin is the second most frequently mentioned ground, with the highest rates observed in Luxembourg (42 %).

The percentages of respondents indicating that the most recent incident of racist harassment involved someone at work or in an educational setting were highest in France (21 %), Luxembourg (20 %) and Sweden (20 %).

When I published an initial article shortly after the "Being Black in Luxembourg" conference, readers contacted me with polarising feedback. One unnamed reader emailed me arguing that it is "easy to find out why people in Luxembourg hate black people, you have to walk around Luxembourg Gare area for one week and you will have all figures on this meter. They (black people) are not hated on color issue (excluding some individuals) but in behavior I suppose."

Another reader, who wants to remain anonymous, explained that he is French and Northern African by origin. He argued that "Luxembourg is not the cleanest candidate" when it comes to systemic racism, recounting his own experiences at a bank. I will leave the (unedited) transcript of his email with you:

"I was hired by a Luxembourgish bank and I was doing extremely well at work until I got a promotion, in the meantime I lived many racial jokes first then insults by many colleagues, the most aggressive ones ended up calling me taliban and molla (btw I am not even muslim) they kept threatening me and asking me to leave because Im not supposed to be with them in that place.

I always ignored these unfortunate events hoping to earn respect through my performance at work but things just kept getting worse to the point that my co-workers started sabotaging my work and giving negative feedback that is subjective and unfounded and not in line with my output at work.

I had enough to the point that I started seeing a doctor to talk about how this affected my health and my family life and the doctor put me 2 weeks on sick leave consequently.

I made the mistake to talk about it HR two different representatives and to the head of security. Guess what happened? I was called by HR few days later to be informed that Im having a pre dismissal meeting, I talked to the union representative who confirmed to them that it would be huge mistake to dismiss me considering my excellent performance at work, but guess what again? the board of directors decided to terminate me, the hr informed me by phone that Im fired for disciplinary reasons, yes ME not someone else.

My health deteriorated and I could not find financial nor physical strength to sue a national bank in their country in a long costly procedure very likely to be run by other racists. I left immediately the country, I told the story to close colleagues and friend and I keep telling it everywhere so people realize how horrible Luxembourg can be to a dark skinned person.

I hope that you note this and mention it somewhere to give a wake up call to some people who do not even know that such tragedies exist."

One in four (25 %) respondents felt racially discriminated against when looking for work in the five years before the survey. The highest levels were observed in Austria (46 %), Luxembourg (47 %) and Italy (46 %).

More than one in 10 respondents (14 %) of African descent say they were prevented from renting accommodation by a private landlord because of their racial or ethnic origin. The highest rates are observed in in Austria (37 %), Italy (31 %), Luxembourg (28 %) and Germany (25 %). Some 4 % of respondents said they were prevented from buying accommodation because of their racial or ethnic origin, with the highest rates observed in Italy (15 %) and Luxembourg (11 %).

These findings echo an earlier investigation our colleagues at RTL 5Minutes carried out last year. They collected shocking testimony of two real estate agents working in Luxembourg on the discrimination that exist today in the rental market. You can read this article here. 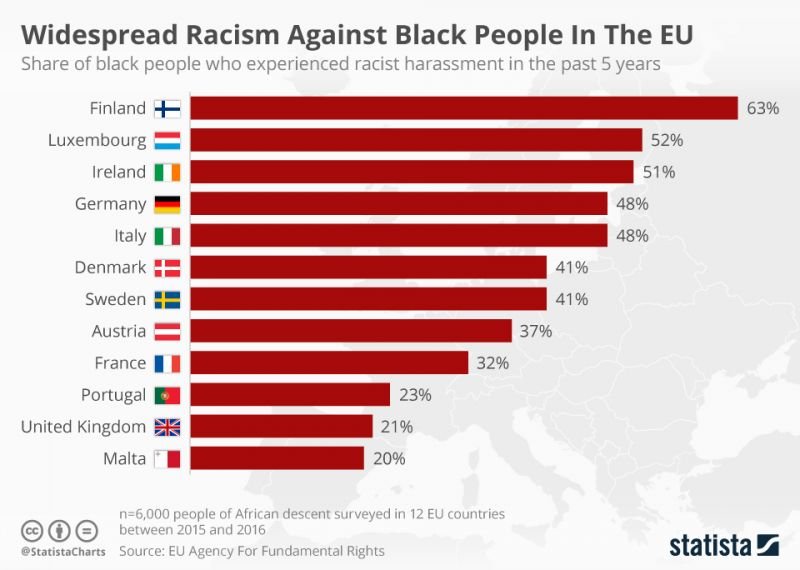 Protests in Luxembourg expressing outrage over the killing of George Floyd are sending the symbolic message that the Grand Duchy stands united against racism. The right to take to the streets is a pillar stone of democracy but it would be tragic if the demonstration in front of the US embassy is politicised in order to paint a picture-perfect image of Luxembourg that stands in a jarring contrast with the lived experiences of our very own dark-skinned communities.

Do you want to share your experience of racism in Luxembourg? Or do you completely disagree with this article? Email me at gerry_erang@rtltoday.lu.