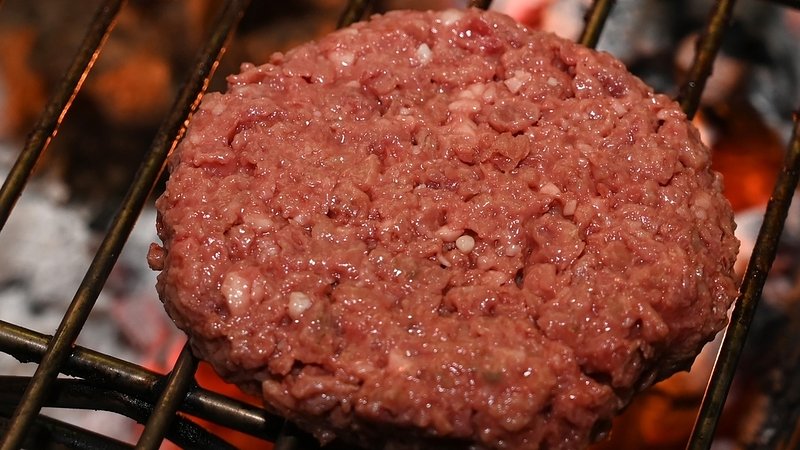 What you see here is the vegetarian "impossible burger," made from plants. It's delicious. / © AFP

From the famous "impossible burger" to vegetarian prawns, ham, chicken, gyros.. there's no denying that 'meatless meat' is having a bit of a moment.

And for good reason! I went from running a cooking blog called 'the bacon bible' — which involved making, for instance, bacon cinnamon rolls and bacon cupcakes — to being a full-blown vegetarian around 6 years ago. The last meat I ate, or rather drank, was a bacon-infused stout. It was delicious.

I don't like how animals are treated in abattoirs, and I felt like a bit of a hypocrite as I knew I wouldn't be able to kill an animal myself, choosing instead to willingly and conveniently letting myself forget where meat comes from. Eventually I decided to try vegetarianism for one month, just to see what it's like. One month turned into two, then a year, half a decade.. and here we are. I don't see myself going back, and meatless meat is a huge part of the reason why.

"Why call it meat?! Just eat vegetables if you don't like real meat!"

This is one of the most tired and tiresome arguments that vegetarians tend to encounter when the subject of fake meats is brought up: why even try to make something that looks and tastes like meat if you're vegetarian?

I've always found it to be rather dumbfounding as to me the answer is incredibly obvious. The reasons for being vegetarian are many - for some it's environmental, for others it's a matter of personal ethics. I fall squarely in the latter group: I don't eat meat because I don't like the idea of raising animals only to send them off to a slaughterhouse. It's just not something that I personally want to support, but equally I'm totally fine with others being of a different opinion. I dislike a pushy vegetarian every bit as much as I dislike people who insist humans need to eat meat and won't stop banging on about it when they meet someone who does not.

The fact that I have chosen not to eat meat does not mean that I don't like it. I liked meat a great deal, as evidenced by the aforementioned blog. I love a juicy burger as much as the next man/woman/person, and it's REALLY hard to find something more boring than the old staple vegetarian "burgers" that used to be the norm.

Just a few years back it used to be that the vegetarian option would be (a) a goat's cheese salad (disgusting), (b) mushroom risotto (tasty but boring), or (c) a vegetarian burger where the patty was invariably made of mushed-up vegetables pressed into a disk and thrown in the freezer for five years until someone foolishly ordered it. Bland, boring, awful.

Being veggie has never been easier

I ate meat every single day growing up, and I love to cook. My main concern about turning veggie was that I'd have to chuck all of my old recipes out the window and start eating tofu with everything - a substance I had heard was incredibly boring, essentially the very opposite of bacon in every way.

Turns out that's not true, tofu (especially smoked tofu) is delicious. But there is also an ever-growing selection of meatless meats, some of which are so realistic you could barely tell them from the real thing — and some of which are truly awful, to be fair, but they're rare.

It's taken a while to get here though, and fake meats have improved immeasurably even in the six years that I've been vegetarian. Veggie "chicken", for instance, used to be little cubes of a spongy soy-based mystery substance that didn't taste anything like chicken, but was oddly tasty in its own way and could be used in a lot of chicken-based recipes. The veggie chicken of today is far more realistic in both taste and texture.

The same goes for veggie sausages, which used to be among the most boring things you could eat. But best of all, I didn't have to give up my love of gyros and doner kebab. My very favourite dish to make is a huge salad packed with gyros and served with homemade chilli sauce and tzatziki, and the vegetarian gyros you get today is insanely delicious.

And if we go back to burgers for a moment, I had the opportunity to try the "impossible burger" last summer while on holiday in the US. It was.. almost too realistic. From the texture, to the flavour, and how it 'bleeds'.. I found myself questioning if the chef had accidentally given me a real burger. I had to order a second one to confirm, and a third a few days later somewhere else just to be sure.

So I'm glad to see that Burger King is rolling out a trial using the impossible burger patty. Let's hope it takes off and makes it way over here, because I cannot wait to have another one - and I'd recommend you try it, too.