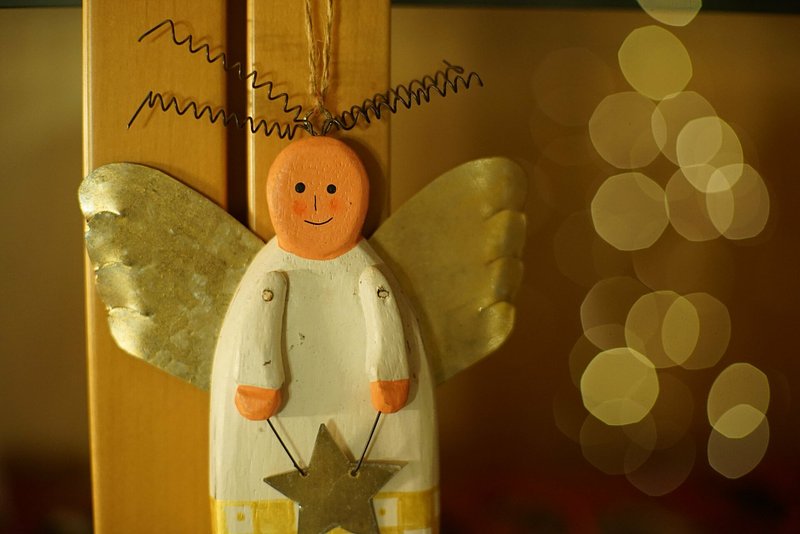 Christmas is a magical time and there are myriads of traditions, stories, songs, and myths that have developed all around the world.

When it comes to Christmas folklore, Luxembourg certainly does not disappoint either: Kleeschen, Houseker, Chrëschtkëndchen…

In this article, we'll dive into the history, traditions, and etymology behind some of Luxembourg's most well-known characters of the festive season.

Everyone who spend at least one winter season in Luxembourg will know about this one. De Kleeschen (Saint Nicholas), also known as Zinniklos in Luxembourgish, evolved from an actual historical figure, a Christian bishop who lived in the city of Myra in Asia Minor between 270 and 350 AD. This historical Nicholas of Myra went on to become one of the most popular saints of the Catholic Church. He was particularly known as a benevolent protector of children, and in fact the Church used his reputation to its own advantage. Catholic bishops and priests promoted the cult surrounding St Nicholas, and in particular his reputation as a secret gift-bringer, to "christianise" the last remaining pagan winter traditions.

De Kleeschen is without a doubt Luxembourg's most popular figure during the festive season, even though he has nothing to do with Christmas itself. The reason why the tradition surrounding St Nicholas is so popular in Luxembourg and the greater region is most likely because a relic of St Nicholas – one of his fingers – ended up in Saint-Nicolas-de-Port in France's Lorraine region, only 120 km away from Luxembourg. 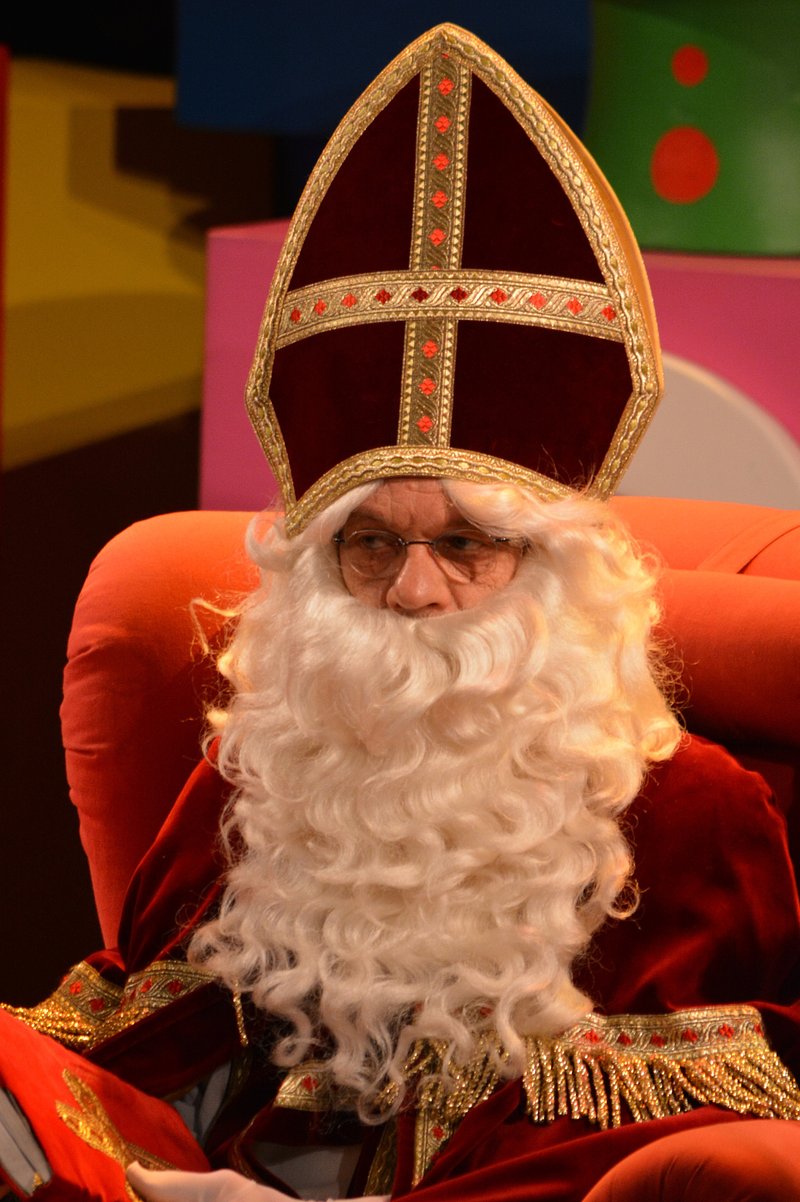 Saint Nicholas is easily recognisable by his mitre, the traditional headdress of bishops. / © Pixabay

Since very little is known about the life of St Nicholas – some even question whether the historical figure actually existed in the first place – a number of legends featuring the character have developed. One particularly famous story has been adapted for the Grand Duchy and translated into Luxembourgish by Georges Schmitt in his poem "D'Seeche vum Zinniklos" (The Legend of Saint Nicholas), written in 1944. Schmitt's poem is set during times when Luxembourg City was still a fortress and tells the story of three boys, who missed the daily curfew and end up in the house of an evil butcher. The butcher wants to turn the boys into meat jelly, but St Nicholas steps in and ends up saving the day by bringing the three boys, who had already been cooked, back to life.

While he might not be a gift-bringer himself, the Housecker is such an interesting character that he more than deserves his own subsection in this short article. The Housecker was known in the Grand Duchy by many different names in the past, including "Ruppert", "De Schwaarzen", "Pelzebock", "Hans Muff", or "Kibo". He is St Nicholas' bad-tempered companion and usually the one to deal with naughty children by giving them a switch. The character seems to have developed out of a variety of local German folklore characters, adapted to serve as a counterpart to St Nicholas.

According to Luxembourg folklore specialist Alain Atten, his Luxembourgish name Housecker goes back to a resistance group in northern Luxembourg, which was active during the so-called Peasant's War of 1798. The group was called D'Klëppelmänner, but they were more commonly referred to as D'Housenger or D'Housenger Béck, as they had their secret headquarters in Hosingen (Housen in Luxembourgish). The group lost their fight against the French and were ridiculed by the population of southern Luxembourg for it. According to Atten, this included referring to St Nicholas' manservant as Klëppelmann or Housenger – which over time morphed into the present day Housecker. Atten suggests that this also explains why northern Luxembourg held on to the figure's original names for much longer than the rest of the country, as they were naturally not very inclined to start mocking themselves for their defeat.

A widespread tradition in Luxembourg includes children leaving their slippers outside their bedroom doors in the days leading up to St Nicholas' Day on 6 December. The following morning, the children wake up to find them filled with sweets or other goodies. Nowadays, it seems to be commonly accepted that it is St Nicholas who fills up the slippers. However, Atten notes that during his own upbringing, it was actually the Housecker's job to do so.

The Chrëschtkëndchen's history is very interesting. Initially, the character started out as a protestant tradition but today it is – with some exceptions – almost exclusively found in historically Catholic regions, e.g. Bavaria, Switzerland, or Luxembourg. By the Middle Ages, the Catholic Church's marketing campaign for St Nicholas had been incredibly successful and the saint had become the most well-known gift-bringer in December. However, the protestant movement was vehemently opposed to the worshipping of saints and thus it is thought that it could have been the father of the Reformation himself, Martin Luther, who came up with a new character who, at the time, was called "heiliger Christ" (Holy Christ). The idea was obviously to separate Christmas from any saints and bring it back to the holiday's origin as the birthday of Jesus, by having the Messiah himself bring the children their presents. 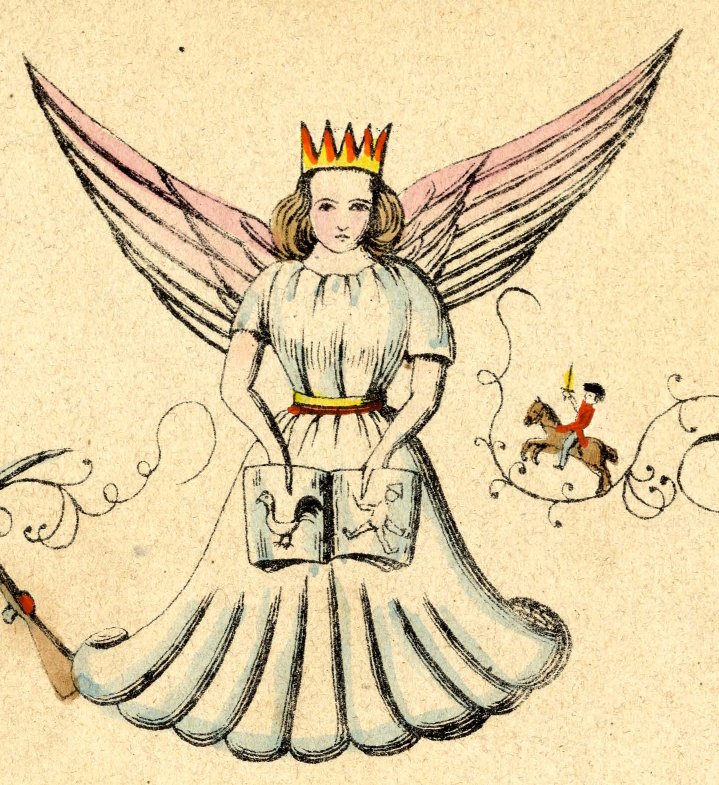 Depiction of the "Christkind" in the first edition of the famous German children's book "Der Struwwelpeter" from 1845. / © Heinrich Hoffmann (1809-1894)

Over time, however, this character – whose name had evolved into Christkind – was starting to get replaced in most protestant regions by Santa Claus (Weihnachtsmann in German) while the figure of the Christkind ironically started to replace St Nicholas in historically Catholic regions. As such, Luxembourg seems to have ended up with a rather peculiar mix of different traditions – continuing to hold St Nicholas in high esteem while having almost exclusively agreed on the Chrëschtkëndchen as the country's Christmas gift-bringer.

It should be noted that the figure of the Chrëschtkëndchen has almost been completely detached from Jesus himself, not only in Luxembourg but in most regions where the tradition exists and has become its own, distinct character.

Probably the most famous gift-bringer of all time, but as a part of Christmas folklore, Santa has played a rather minor role in the Grand Duchy, at least compared to the figures discussed above.

Santa Claus most likely evolved from the St Nicholas tradition and at some point became an entirely different character. His name probably goes back to the Dutch name for St Nicholas, "Sinterklaas", which was brought to the US by Dutch immigrants: Sinterklaas became Saint Claus and finally Santa Claus.

Santa's well-known appearance has NOT been invented by Coca Cola, by the way. Long before Coke dressed him in red for what was to become an astoundingly successful advertising campaign, Santa has been depicted in his red coat all throughout the 19th century. German emigrant and cartoonist Thomas Nast helped shape the modern image of Santa and drew him wearing red in a famous illustration from 1881. Nast likely took inspiration from the "Belznickel", a Palatine folklore figure. Cartoonist Haddon Sundblom used Nast's illustration as the basis for his own when he drew the character for Coca Cola's initial ad campaign featuring the jolly chap. 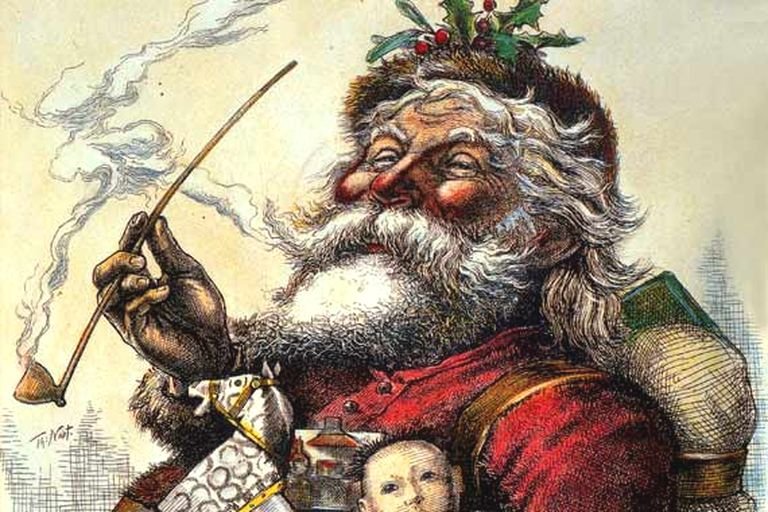 Santa is not traditionally part of Luxembourg's Christmas folklore, but he has become increasingly popular due to his frequent use in commerce and advertisements.

These are some of the more prominent characters of Luxembourg's Christmas folklore. However, it should go without saying that there are actually countless others. The Grand Duchy's diverse population has introduced numerous other mythical beings from all sorts of traditions to the country. From Italy's Befana to Russia's Ded Moroz, there is still so much left to discover and if you are still looking for something to do until New Year's Eve, it is more than worth your while to look up other Christmas traditions and characters as well.