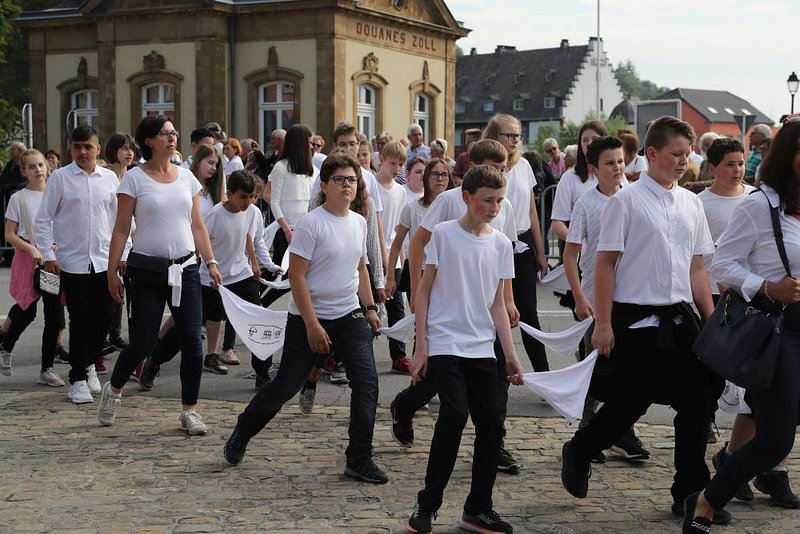 Here's everything you need to know about hopping through Echternach, as the traditional procession returns in 2022 after two years' absence.

What is it?
Thousands of dancers line up in rows of 5-6 people, linked together by holding the tip of each other’s handkerchiefs, and hop in a set pattern up to the tomb of St. Willibrordus. While this started out and to some extent remains a religious event, it has also become cultural tradition which attracts thousands of spectators and pilgrims each year.

If you're wondering what the celebration looked like in 1960, then watch this video below.

Some say a sorcerer named Veit plunged Echternach in a dancing mania and only Saint Willibrord managed managed to put an end to the carnivalesque event. Read more about this story of Luxembourg's magical past here:

Dance til you drop! Sorcerers and steamy dancing mania in Echternach

Why should I know about it?
The hopping procession, alternately known as the dancing procession, of Echternach is an annual event dating back to he 16th century. It started with male pilgrims from Waxweiler hopping their way to Echternach to present their offerings for the Whitsun holidays. Today, it's a traditional celebration held on Whit Tuesday and attended by thousands of pilgrims and tourists every year. As of 2010 it is also recognised by UNESCO as an intangible cultural heritage event, and it is the last remaining traditional dancing procession in Europe.

Is the hopping freestyle or choreographed?
Choreographed - it's rows of four or five, all holding onto handkerchiefs, hopping from left to right while slowing moving forward.

Anything else I should know?
You’ll have to plan ahead a bit to catch this particular event as it only happens once a year on Whit Tuesday. Due to coronavirus the past two editions had to be cancelled, but this year's event will take place on 7 June.

The hopping procession of Echternach
The photos published on this site are subject to copyright and may not be copied, modified, or sold without the prior permission of the owner of the site in question.