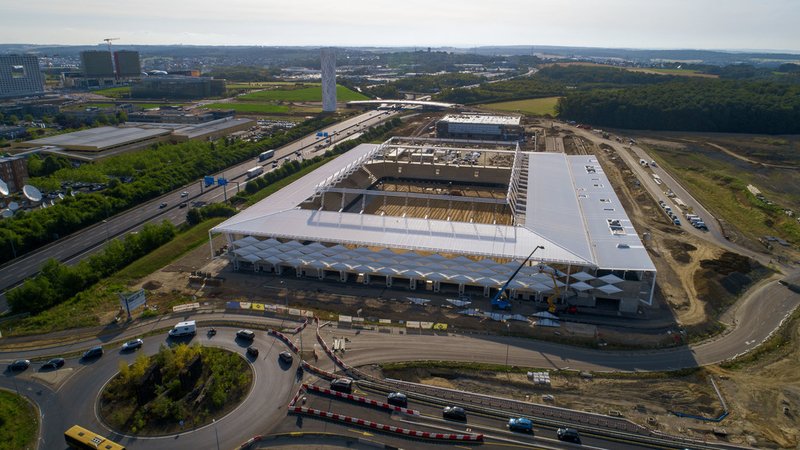 RTL's Frank Elsen explains why the new stadium could cost up to €80 million .

The new stadium in Kockelscheuer is set to cost around €80 million. The city aldermen recently approved a budget increase of €18 million after a number of errors in planning and budget estimates. It is unclear where the responsibility for these errors may lie, and the municipal authorities did not provide details.

In 2014, prior to construction, the stadium was estimated to cost between €30 million and €35 million. A year later, this figure had jumped to €58 million. By the end of 2016, it had increased further to €61 million. Recently, however, the budget has skyrocketed, owing in part to errors made by the planning bureau, according to recent comments by Luxembourg's mayor.

Leading the project is the city council, supported by 12 German and Luxembourgish architect- and engineer offices. However, the source of the errors was not confirmed by the council. The Ministry of Sport also declined to comment.

According to online magazine Reporter, the underestimated budget affects all areas of the construction. There are issues with the facade, lighting, CCTV, and the development of 5G. The car park beside the stadium also commands a high sum, although 8 of the addition €18 million is not clearly accounted for.

The error affecting the facade stems from an underestimation of around €1.4 million. The insulation was incorrectly calculated. The construction is open behind the stands, causing draughts. Open-air events are also not allowed on the pitch within the stadium, meaning any concerts at the venue will need to take place in a car park beside the stadium. This was estimated to cost €700,000, but has since jumped up to €2.7 million.

Further errors befell the ladies' toilets, as due to calculation errors, there are fewer ladies' bathrooms than there are mens'. This decision could impact open air events when visitors will expect to use the stadium's facilities.