Jesus Herrada was the first to cross the finish line in Diekirch, followed by Maurits Lammertink and Anthony Turgis.

Yesterday’s weather conditions made for a rather difficult third stage, especially towards the start of the 179 kilometer route. Spanish cyclist Jesus Herrada managed to cross the finish line first, just three seconds before Maurits Lammertink from the Netherlands. Anthony Turgis finished in third place, 7 seconds behind Herrada.

For the general leaderbord, Herrada now lies 9 seconds ahead of Lammertink, and Kevin Keniets is the best Luxembourger in 17thplace with 1 minute and 11 seconds. 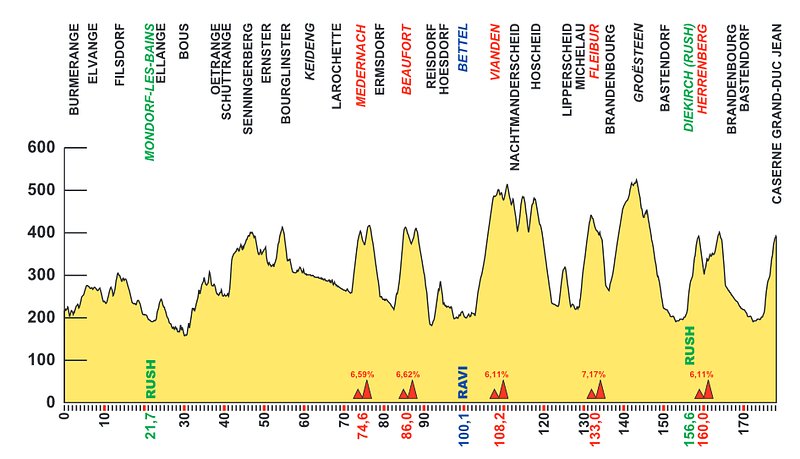 The third stage, which was also the queen stage of the race, covered 179 kilometers between Mondercange and Diekirch with plenty of elevation gain and sprints.

The peloton split into two large groups very early on in the third stage of the race. 34 cyclists formed the leading group, with Gaetan Pons being the only Luxembourger. Various smaller groups formed behind the peloton shortly after. Another, smaller, leading group of 4 cyclists managed to leave the peloton behind by four minutes, notably Robin Carpenter, Mauro Finetto, Alessandro Tonelli and Dries de Bondt. Strong winds and rain made the race considerably more difficult.

Around 60km before the finish line, the race’s overall leader Christophe Laporte had to give up due to stomach issues.

It proved increasingly difficult for several cyclists to maintain their leading positions in the race, including for Robin Carpenter and Mauro Finetti. Around 17km before the finish line, the peloton managed to overtake the smaller leading group. However, shortly thereafter, Dries De Bondt, Angelo Tulik and Jesus Herrada managed to extend their leads, when they were finally overtaken by the Peloton once again.

With lots of back and forth between the leading trio and the peloton, the third stage ended with Herrada in first place.