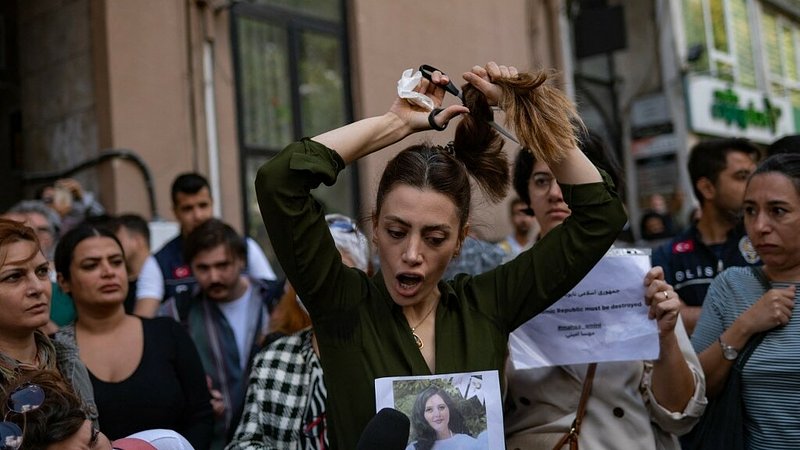 UKRAINE REFERENDUM - Starting today until the 27th September, four Russian-occupied regions of Ukraine - Donetsk and Luhansk in the east, and Kherson and Zaporizhzhia in the south - will hold so-called referendums on joining Russia. In a televised address on Wednesday, Putin said Russia needed to support those in Ukraine who wanted to "determine their own future". The EU has said it will not recognise the results of the votes, while US President Biden accused Russia of violating the UN Charter with a war aimed at "extinguishing Ukraine's right to exist as a state".

IRAN PROTESTS - Iranian President Ebrahim Raisi has said the death of a woman in police custody must be investigated after it sparked widespread protests. Speaking on a visit to the UN General Assembly, Mr Raisi accused the West of hypocrisy for raising concerns over Mahsa Amini's death. She died hours after morality police arrested her for allegedly breaking headscarf rules. At least 17 people have died in the worst unrest in Iran for years. The well-known CNN journalist Christiane Amanpour confirmed that President Raisi cancelled a planned interview with her in New York, because she refused to wear a headscarf for the interview.

CLIMATE DEMO - Youth for Climate Luxembourg is organising a climate protest in Luxembourg today. The demonstration will take place at 3pm at the Glacis and will end on Place Clairefontaine with speeches and music. The youth-led climate protest movement is back on the streets after an absence of over 2 years. In that time, demands haven't changed much - members say the government's measures towards climate neutrality do not go far enough and they ask for more investments in green energy. The movement Fridays for Future has also called for demonstrations across Germany today.

PSYCHOLOGIST DEBATE - The chamber will debate a petition on the reimbursement of psychologists bills this morning. The Minister of Social Affairs, Claude Haagen, has also announced that mediation between the health fund CNS and the association of psychotherapists should re-start today to reach an agreement on fees. There has been criticism that, for example, psychotherapy hours for children are not reimbursed by the CNS. The Ombudsman for Children and Young People said the mental health of children has suffered greatly since the beginning of the pandemic.

MICROLIGHT ACCIDENT - Two people died on Thursday after their microlight crashed shortly after take-off. The crash occurred in open countryside near Guéblange-lès-Dieuze, in the French Moselle region, 2 hours south of Luxembourg. For a reason yet to be determined, the aircraft crashed to the ground where it immediately caught fire, leaving no chance of survival for its two occupants. The Républicain Lorrain reported the small aircraft had problems during take-off "as evidenced by a part of the aircraft found in a tree located between the runway and the crash site".

ELTON JOHN US - Elton John is performing at the White House tonight, as part of his marathon global farewell tour. President Joe Biden and First Lady Jill Biden will host the British superstar singer on the South Lawn, in a return of public events at the White House following the easing of Covid-19 curbs. Elton John, who is 75, was ranked the top solo artist in US chart history in Billboard's 2019 list of the "Greatest Artists of All Time" and third overall behind The Beatles and The Rolling Stones.

FOOTBALL LUXEMBOURG NATIONS LEAGUE - The national football team drew 3-3 in the Nations League yesterday in Turkey, which makes Turkey the group winners with 13 points. Luxembourg has 8 as the 2nd, and will play at home against Lithuania on Sunday.

In other matches last night France won 2-0 against Austria. Belgium 2-1 against Wales and Croatia also 2-1 against Denmark... Today, among others, Italy plays England, and Germany Hungary.

TENNIS FEDERER-  Roger Federer will bring the curtain down on his career in a "super special" match alongside long-time rival Rafael Nadal at the Laver Cup in London today. The 20-time Grand Slam champion announced his retirement last week at the age of 41. But he will appear for one final time for Team Europe at the Laver Cup, linking up with Nadal in a dream doubles pairing against Team World's Frances Tiafoe and Jack Sock at the O2 arena.