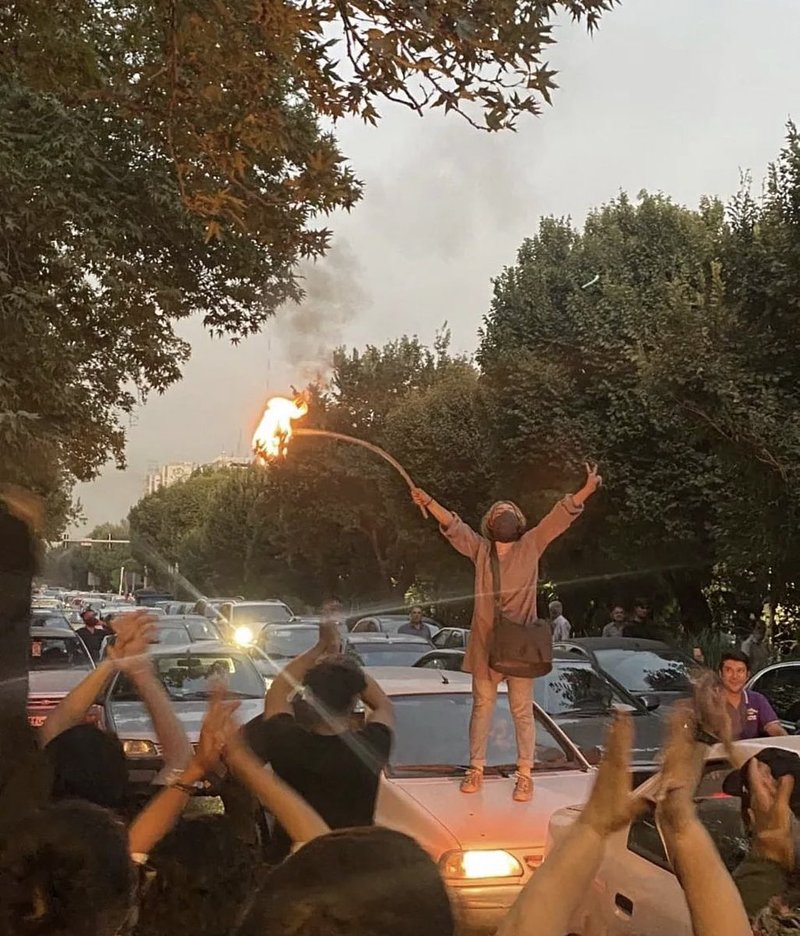 A woman atop a car set fire to her headscarf during a protest. The image has become a symbol of the protests on Twitter / © Masih Alinejad / Twitter

Women are at the forefront of protests in Iran, as they mourn and express their anger at the tragic death of Mahsa Amini who had been detained for breaking hijab laws.

The 22-year-old woman died in Tehran on Friday after suffering from a stroke and several heart attacks while in the custody of Iran’s ‘Morality Police’ for her “improper” hijab, according to authorities and local media.

At least six people are believed to have been killed since the protests began.

What happened to Mahsa Amini?

She had been in the capital, Tehran, with her brother, when she was arrested by their so-called Morality Police, who accused her of breaking the law requiring women to cover their hair with a hijab and their bodies with loose clothing. She reportedly collapsed from injuries at a detention centre before succumbing to her injuries.

Reports give accounts of police beating Ms Amini's head with a baton and banging her head against a vehicle according to the Acting UN High Commissioner for Human Rights Nada al-Nashif.

The police have denied these reports saying she suffered from "sudden heart failure". Her family has had to deny these claims, saying she was fit and healthy.

Anti Government protests have erupted in cities across the country in response to Ms Amini’s tragic death, with many women burning their headscarfs.

Security forces have been firing on crowds led by women. In Tehran, where protests have erupted across university campuses as well, videos shared online show women taking off their headscarves and shouting "death to the dictator" - a chant often used in reference to the country’s Supreme Leader Ali Khamenei.

A woman attending the protests told the BBC: "[The police] kept firing tear gas. Our eyes were burning...they cornered me and beat me. They were calling me a prostitute and saying I was out in the street to sell myself."

Since 2014, Iranian women had began sharing photos and videos of themselves publicly flouting the hijab laws as part of online protests, that have since inspired movements such as “White Wednesday” and “Girls of Revolution Street”

Al Jazeera is reporting that ‘Anonymous’ have hacked Iran state websites and several media websites have been targeted in support of the protests.

Iran was very different from the 1930's to the 1980's. After the 1979 Islamic Revolution in Iran, authorities imposed a mandatory dress code requiring all women to wear a headscarf and loose-fitting clothing that disguises their figures in public.

The Morality Police or officially ‘Guidance Patrols’ was set up, and one of their tasks is ensuring women conform with the authorities' interpretation of "proper" clothing.

Officers stop women and assess anything from their clothing or if they think they are wearing too much make-up. Punishments for violating the rules include a fine, prison and evening whipping.

Pressure is Building In Iran

Raisi is accused for his participation in the 1980s sentencing to death of thousands of people, when he served as a judge.

He is currently in New York for the UN’s General Assembly where he is already set to face intense scrutiny over Iran's human rights record.

Tehran's Governor Mohsen Mansouri tweeted on Tuesday to say that protests are being "fully organised with the agenda to create unrest" and state TV alleged that Ms Amini's death is being used to promote Kurdish separetist movements.