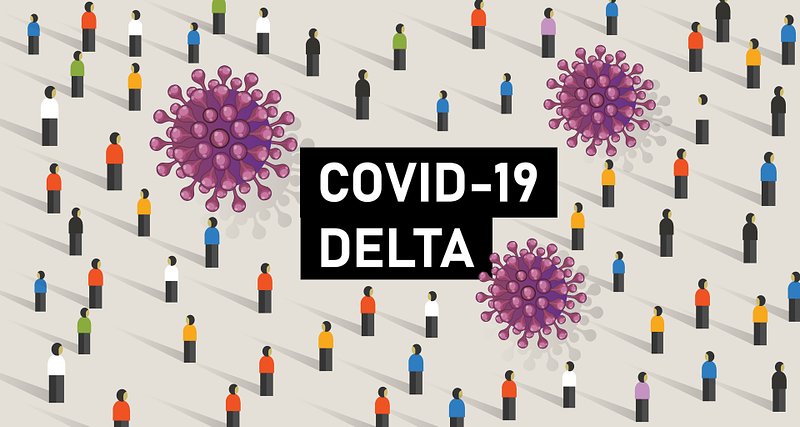 The number of infections in Europe is rising again. Is that due to the Delta variant? How contagious is it? How well do the vaccinations work? What do we know and what remains unknown?

The Delta variant was first identified in India and was initially referred to as the "Indian variant". It caused a strong wave of infections on the subcontinent and has now advanced into Europe.

In contrast to India, however, here in Europe we are more advanced with our vaccination programs. What can we expect now? What do we know about this variant so far? And what is still to come?

Here are the most important points:

What we know so far

How much more contagious is the Delta variant?

After an initial analysis of more than 1.7 million SARS-CoV-2 gene sequences, scientists estimate that the Delta variant is around 40 to 60 percent more contagious than the Alpha variant.

This is also in the range that the models of the Luxembourg COVID-19 Task Force have calculated. The expert group from the various areas of the Luxembourg research landscape assume a 40-50 percent higher infection rate compared to the alpha variant.

For the Scientific Pandemic Influenza Group on Modeling (SPI-M), a group of experts from the UK Ministry of Health, this number is even higher - even up to 80 percent. Laboratory tests also assume that Delta is significantly more contagious than Alpha.

For vulnerable people, at-risk groups such as the elderly or immunocompromised people are called in technical jargon, the risk of infection with Delta is particularly high. This is what the European Center for Disease Prevention and Control (ECDC) is assuming.

As a result, the proportion of people who need to be immunised in order to achieve the goal of herd immunity is increasing.

Ending the pandemic through herd immunity - is it possible? (in German)

Exit strategy: How do we know the virus is under control in Luxembourg? (in German)

Does the vaccination protect against severe disease?

From the first dose onward, vaccinations seem to protect against severe disease as well as the Alpha variant (see Table 1). This was the result of a study that had previously been published as a precursor, i.e. without an assessment by independent experts. It seems to behave differently with slight gradients.

According to another study, which was also published as a precursor, vaccination protection does not apply until after the second vaccination and is then a little lower than against the Alpha variant (see Table 2).

In both studies, the scientists looked at the vaccines from Biontech / Pfizer and AstraZeneca.

Good to know: The fact that the number of infections is rising again in countries like England or Israel despite extensive vaccination programs is not mainly due to the fact that the vaccinations protect somewhat less effectively against infections. It is mainly due to the fact that the variant is more contagious. It infects more people. It can spread quickly, especially among the non-vaccinated. However, it also spreads - to a lesser extent - among people who have already been vaccinated (and especially among those who have been vaccinated once).

Are the symptoms different from those of other variants?

There are actually initial indications that the symptoms of an infection with the Delta variant differ from those with other variants. "More like a bad cold," said the head of the British Zoe Covid Symptom Study Tim Spector to the BBC.

In the study, which asked around four and a half million people about the symptoms of their Covid-19 disease, headaches and sore throats and a runny nose came to the fore. The previously typical disorders of the sense of smell and taste, however, were less widespread.

How widespread is the variant in Luxembourg?

With the overall number of infections falling, by calendar week 23 (June 7th to 13th), most of the infections in Luxembourg were due to the Alpha variant, which was first discovered in Great Britain. That changed the following week. Delta has been the predominant variant since week 24, after its share had almost doubled week after week.

Overview of the different variants in the infections in Luxemburg 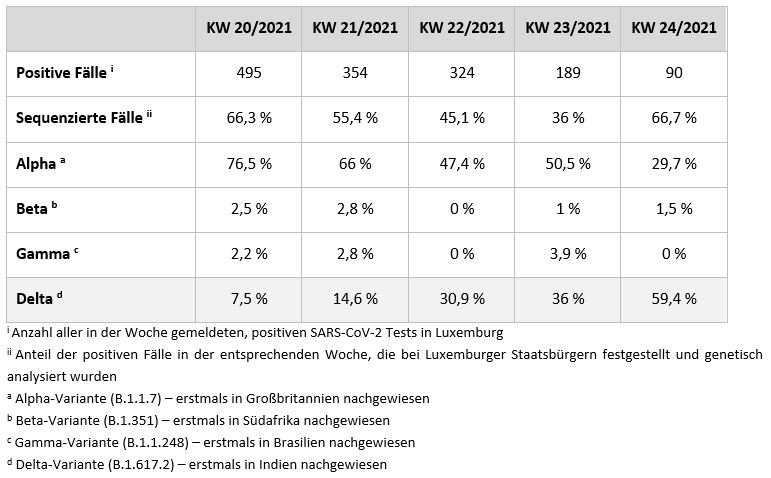 What's next for Delta in Europe?

According to mathematical models from the European Center for Disease Prevention and Control (ECDC), around 70 percent of all Covid-19 cases could be caused by the Delta variant at the beginning of August. A month later, this is said to have almost displaced the other variants with around 90 percent.

How is the situation in Great Britain right now?

The Delta variant was first detected in Great Britain on February 22, 2021. Since then, it has supplanted the previously dominant "British" Alpha variant of concern. After 55 new cases at the end of April, the number of people infected with Delta in the UK rose to 132. Another month and a half later, on June 11, 2021, Delta caused 91 percent of all new infections, according to British Health Minister Matt Hancock. After a period of relatively low new infections between the beginning of March and the beginning of June with only around 2,000 cases per day in some cases, the numbers have been rising steadily since then and were already well over 24,000 on July 3, 2021. In response to the rapid spread of the Delta variant, Prime Minister Boris Johnson postponed the relaxation of the Covid restrictions planned for June 19 by four weeks on June 14.

After Portugal was still struggling massively with the virus at the beginning of 2021 and recorded over 16,000 new infections per day, these fell noticeably in February and remained in the three-digit range until mid-June. The proportion of the Delta variant in the infections increased steadily. As a result, Lisbon was temporarily cordoned off. At the end of June, Germany classified the travel destination Portugal as a virus variant area. That means that anyone who comes back from vacation has to be in quarantine for 14 days. At the beginning of July, the Portuguese government took more drastic steps. Since then, around 40 cities, including the capital Lisbon and the port city of Porto, have been subject to a night curfew. The number of infections is currently again over 2,300 per day.

And the situation in India?

The number of infections on the Indian subcontinent with its around 1.3 billion inhabitants peaked in autumn 2020 with around 100,000 cases per day. Then there was a flattening of the infection rate, so that at the beginning of 2021 the country already believed that it was well on its way out of the crisis. In mid-April, however, there was a sharp increase in the number of infections.

More than 300,000 new cases were registered for three consecutive days. Delta, found for the first time here in India, was declared the predominant variant in May and shortly thereafter the World Health Organization (WHO) declared it a variant of concern. The number of cases in India has been falling again since June.

Some experts suspect that the virus itself could have taken care of this through its rapid spread. After calculations indicate that one billion Indians have already been infected with the SARS-CoV-2 virus, it could be more difficult for it to find a suitable host.

What we don't yet know

Is the Delta variant leading to more severe cases and hospitalisations?

A first study from Scotland suggests that infections with the Delta variant lead to twice as many hospital admissions as with the Alpha variant. The RKI President Lothar Wieler cites similar figures for Germany, although he also refers to the still sparse data situation. So there is still more research to be done to finally answer this question.

However, this tendency is offset by the increasing number of vaccinations, which reduce the number of severe courses and hospital stays. The fact that young people in particular are currently not vaccinated and tend to get infected more often (and yes, they tend to be less susceptible to severe courses) reduces the ratio of severe courses to the number of infections. So it may be that the impact of the Delta variant on hospital stays is not that strong because of the increasing number of vaccinations and people who have recovered. But that cannot be said for sure at the moment.

Are drugs and medicines less effective against Delta?

Everyone is talking about vaccines against the SARS-CoV-2 virus. But the most important weapon to date should not remain the only one. Intensive research is also being carried out on drugs to treat a Covid-19 disease that has already broken out.

At least 331 drug candidates are currently being tested; 94 in pre-clinical studies and 237 in clinical studies. The extent to which these are also effective against Delta remains to be seen, however, initial findings in this direction come, for example, from a preparation with antibodies that is currently in the phase II study and appears to be effective against the variant.