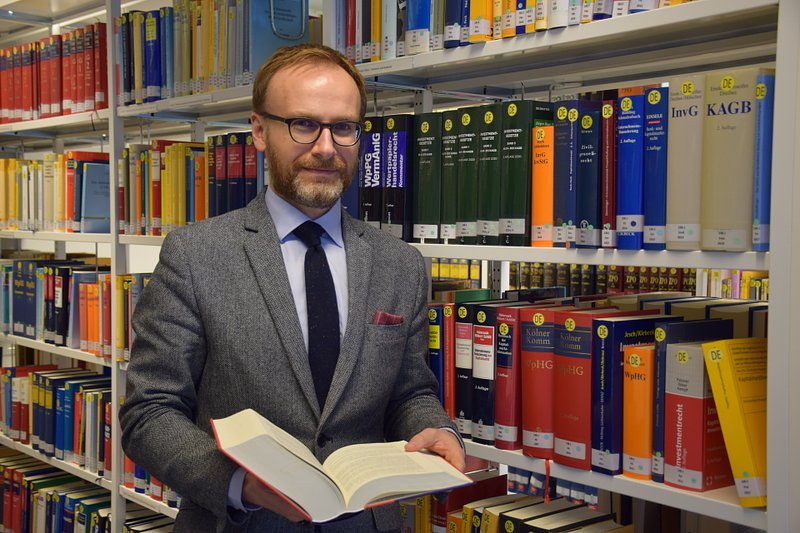 Jacek Dybinski is researching how to properly sanction black sheep in the EU financial market, in order to keep it working properly.

Think of the Wirecard scandal that shook Germany in 2020: The financial services provider had reported fictious revenues from subsidiary companies which accounted for the bulk of Wirecard’s profits – but just did not exist. In June 2020 Wirecard had to admit that 1.9 billion Euros where missing and its company value at the stock market fell from 28 billion dollars to almost zero. The company declared bankruptcy soon after.

Setting up and controlling the rules

Obviously, clear rules and sanctions are required to prevent misconduct in the financial sector. This is where the research by Jacek Dybinski at the Max Planck Institute for Procedural Law in Luxemburg comes into play.

‘It is both, theoretically and practically very important, to effectively supervise the markets. There is a long history of failures in the markets and nowadays they are developing quicker than ever. Regulators are always a few steps behind the market', the researcher reports. 'However, people can really lose money and as a consequence their faith in the system', he stresses.

Faith in the system: glue for society

In a current research project, Dr. Dybinski analyses the rules in the field of sanctioning the violations of EU financial markets law. His focus on sanctions here has a clear reason: society wants its financial sector to be accountable and there is a growing concern that national financial supervisors might not be able to prevent financial scandals – a sad example just being the inability of Germany’s supervisory authority to prevent the Wirecard scandal.

‘In our research project we are asking: What could be the tools to improve the supervision and lead to better enforcement in the market? Which laws need to be changed to make them more coherent at a European level?’, Dr. Dybinski says. At the end, he and his colleagues in the Research Group on European Financial Markets Law want to come up with a ‘toolbox’ and new instruments to harmonize the existing law and improve the procedures, so that European law can be translated into member states’ laws. The researcher emphasizes that this is by no means just an academic question but has clear real-life consequences: ‘We see our research as a proposal of redesigning the system and really improving the law, the functioning of the law and ultimately of society at large.’

In his project, Dr. Dybinski seeks to determine which provisions could benefit from greater harmonisation at the EU level and which reforms could benefit Member State financial markets law, with the aim of achieving credible deterrence from marked misconduct. By comparing sanctions and how they are applied in different countries, he and his colleagues are thinking of the concepts and design of robust but smart sanctions. Because, as he explains, administrative sanctions are in general efficient, but the fines imposed on companies, when designed or implied improperly, might amount to the double-punishment for investors, by undermining the economic value of their investment, which shouldn’t be the primary aim of sanctions. Dr. Dybinski explains: ‘In the currently fragmented landscape, we look for ways to harmonize the laws to achieve better outcomes for society. After the financial crisis in 2008 and the Wirecard scandal, there is a societal desire to evade such incidents in the future.’

Jacek Dybinski is optimistic that his research will be taken up in ‘real-life’: ‘European legislators and supervisors are very interested in our research and the EU is a global leader in tackling these issues. In Luxembourg, we are right in the middle of the financial markets and we think that our research results will gain a lot of momentum so that in the end they will help to improve the legislation and its enforcement’.