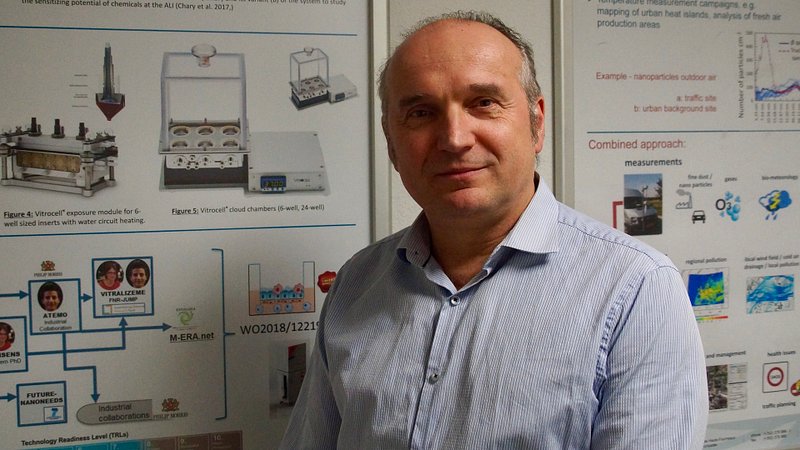 Animal testing in research is highly controversial. LIST scientist Arno Gutleb and his team are working on a promising alternative.

What we breathe in, travels to the alveoli, i.e. little air sacs in the depths of our respiratory system. This applies to all nanoparticles in the air and thus also to those that are harmful to us.

Whether or not substances are hazardous to health must therefore be tested in advance. The Environmental Health research group at the Luxembourg Institute for Science and Technology (LIST) is working on this very issue.

Arno Gutleb's team has developed a lung model that does not require the use of animals. As the researcher explains, animal testing in this field is problematic, not only for ethical and social reasons.

Arno, thanks to your research, mice and animal rights activists alike can breathe a sigh of relief, right?

That's right. But there are decisive differences between mice and humans. If we compare our lungs with those of a mouse, and if we also have to take into account that we are two-legged and walk upright, the aerodynamics of a human lung are completely different from those of a mouse that is four-legged and moves bent over at the front.

Nanoparticles therefore take a completely different path in a mouse lung than in a human lung. When you study asthma in mice, you get an idea of what you could study in humans, but not much more than that. So our idea was to develop a lung cell culture model for the alveoli ourselves.

What makes this model special?

For the bronchial tubes (the lung canals through which the air reaches the alveoli), commercial models have been available for some time, but for the alveoli there have been virtually none so far. We have expanded in this niche and have already applied for a patent. Aline Chary, a doctoral student from our team, was even awarded the Lush Prize for this. Last year, Aline also received a project by the PETA International Science Consortium, the scientific arm of the animal welfare organisation PETA. The aim of this project is to switch to serum-free production of cell cultures.

So the use of animals has not yet been completely abandoned even in cell models?

Although no animals are used in cell cultures, almost every cell culture contains calf serum, a component of the blood. And the animals do not donate this blood voluntarily, but the calves are removed from the womb during the slaughter of the mother cow. The blood is then drawn off and used to produce serum. So it may be free of animal testing, but it is not animal-free. PETA now supports us in the next step to establish an animal-free cell culture.

How does a cell culture work?

In cell cultures, a distinction is made between primary cells and cell lines. Primary cells come from the patient. If, for example, part of the lung is cut off during a lung tumour operation, then it is of course not the whole, removed part that is affected by the tumour. And this material is accessible. There are companies that make bronchial cell culture models from this material. The advantage is that it is a primary cell that behaves in exactly the same way as it does in our lungs.

However, we use tumour cell lines for this purpose. Such a cell line practically lives forever as it divides itself over and over again. So we have no problems with replenishment or ethical issues, we do not need a patient, or a hospital and we do not have to worry about AIDS or hepatitis. Genetically speaking, of course, every tumour cell is a little different from a non-tumour cell. This is a disadvantage of our cell lines. But the answer you get is always the same, which is not always the case with primary cells.

What happens with these cell lines?

Our cell culture model has up to five different cell lines. These grow in small baskets. And because the lung cells in our body do not grow in the blood but in the air, there is no other medium above these cell lines, only air. The cell cultures lie on a membrane with fine holes, while the nutrients are underneath.

The lung cells produce - as they do in the lung - the surfactant substance, which ensures that the lung cells do not stick together. On top are macrophages, the so-called scavenger cells. On the underside of the membrane we have blood capillary cells and finally the dendritic cells. These are white blood cells that look for anything in the alveoli that might trigger an allergy in any way. And if there's something there, they report it. 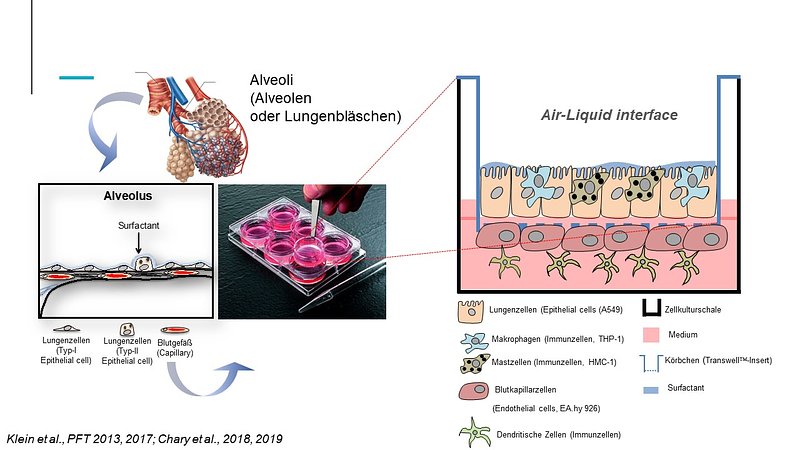 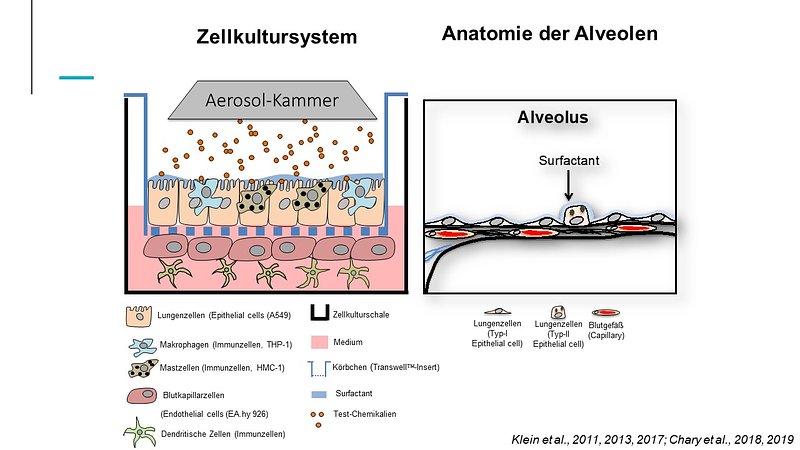 And these cells are what this is all about?

Exactly. We examine these cells after we have added certain chemicals. The cells then tell us whether or not this added substance has the potential to cause asthma-like symptoms.

Which substances are tested?

At the moment we mainly use known fabrics to see if our system works properly. For example, we use industrial chemicals to which the average consumer is never exposed, and which are used in a factory in segregated areas, with vents or breathing protection. We test these substances to see how our system works. At the same time, we also test harmless substances, which must not trigger a positive response.

When we have tested all this, we can say: Okay, give us the new industrial chemicals of the future, and we will then try to predict the possible effects. This is so important because when companies manufacture or import large quantities of substances, they must also provide information on possible effects on the respiratory tract. However, many companies do not have the opportunity to test this reliably. Not even by means of animal testing.

So there is a market for it...

Absolutely. And we want to cover that. We can basically test everything you inhale using this model. No matter whether these are chemicals or nano materials. For example, we currently have a project in which we are testing algae-based oils that will be used in the future as gear oil to replace mineral oil. A gearbox is a closed system, but if a mechanic has to open the gearbox, he may inhale oil that is in there. So the companies come to us and ask us if we can test it.

And how much time do you need to carry out such a test?

We start with the cell culture on Friday which will then be ready by the following Tuesday. By then, the cells are assembled and live. On Wednesday we add the chemical and the day after we harvest the cells. Then we need another week or so to measure everything. When everything is prepared and we get the chemical, we can tell within a week to ten days whether the substance has a serious effect on the respiratory system or not. So the whole process is quite fast.