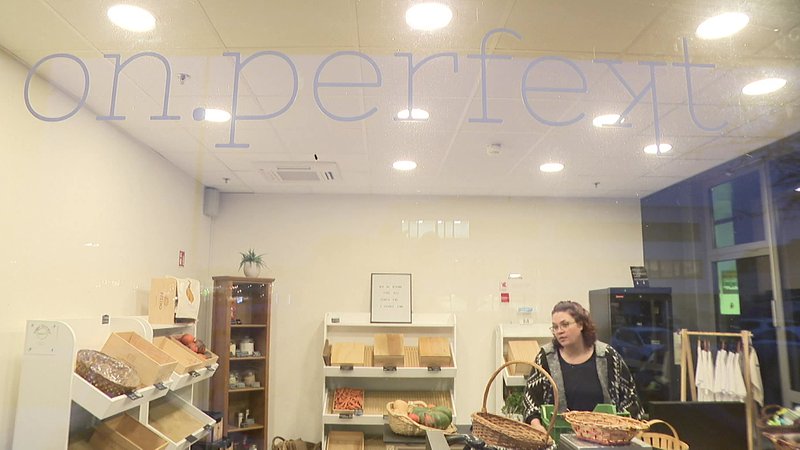 While food is being distributed to people in need in Ettelbruck, many other establishments simply throw food away, despite it often still being perfectly edible.

To prevent this, three friends launched the Onperfekt ("Imperfect") initiative in early 2020 to distribute food that does not meet the "beauty standards" of modern supermarkets. They started with a pop-up market in Hosingen before opening their own store in Marnach.

At 8am, Julia Gregor and Nathalie Malget are restocking the shelves of their store. They mostly sell fruits and vegetables, but also spices, beer, dairy products, and on Saturdays also bread. All of these food items are safe for consumption but because they are either too small, not yet ripe, bruised, or have recently expired, the co-op Onperfekt sells them at a discount.

Expired products are even sold at 70% off their regular price. Despite what some may think, the shop's customers come from a diverse range of socioeconomic backgrounds.

Julia Gregor, one of the founding members of Onperfekt, told our colleagues from RTL Télé that their customers include "elderly people, young people, families" but also "many singles, or at least people who live alone, who are happy that they can purchase smaller quantities at our store."

The co-op's customers have no concerns about the quality of the products. Nora Schleich, who regularly shops at Onperfekt, stated that "just because a carrot isn't totally straight doesn't mean that it won't taste good." "I'm completely opposed to food waste and the idea that everything needs to be neat and clean," she stressed.

Onperfekt collaborates with 14 local partners, mostly farmers but also other food sector professionals. One of their partners is the Kiischpelt Vegetable Garden, which is run by a Wiltz co-op between Wilwerwiltz and Enscherange. Since 2022, the Ludivig Farm in Holler has also been working with Onperfekt.

The farm's owner, Nico Ludivig, explains that the collaboration came about as a result of the extremely poor vegetable harvest this year. Many carrots were "extremely small," making selling them "on the big market" difficult, if not impossible.

In fact, Ludivig regularly harvests vegetables that "don't meet the standards." Usually, "at least 40%" of vegetables do not look like they are "supposed to look." Rather than feeding them to the cows or throwing them back into the field, Ludivig prefers to sell them to Onperfekt at a discount – Much to the delight of the customers, who can shop at Onperfekt on Fridays, Saturdays, and Mondays.

The full report on RTL Télé (in Luxembourgish):