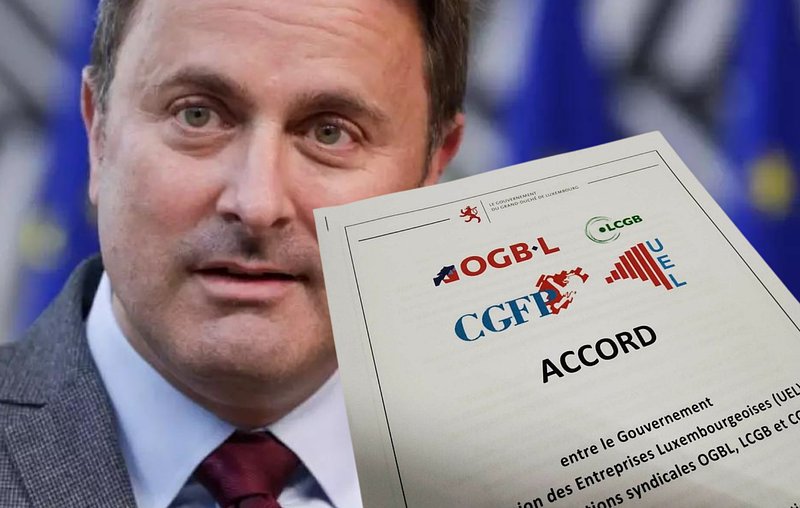 The document, which the authors describe as "historic" in the introduction, was signed at 1.30pm on Wednesday.

RTL has received a copy of the Tripartite agreement, which was signed on Wednesday by the government, the Luxembourg Employers' Association (UEL), and the three trade unions LCGB, OGBL, and CGFP.

The measures aim to slow down inflation, assist househoulds and companies and favour the digital and energy transition.

The decided measures, agreed at the tripartite, are described in a 10-page document, are now expected to be put into bills, to then be accepted by the government on Friday.

The €1.1 billion total cost of the measures appeared officially for the first time in the document signed on Wednesday.

The document was still being worked on this morning, to ensure the details were corresponding to the 30 hour-long negotiations, agreed upon at Senningen Castle.

The aims of the agreement are described as follows: slowing down inflation, assisting households and companies through specific measures, and favouring the digital and energy transition.

A new tripartite in case of third wage indexation

The agreement is broken down into three specific chapters.

The wage indexation system will once again function as normal according to the agreement. However if a third wage indexation is triggered, the social partners will reconvene for new tripartite negotiations.

In this scenario, the government would commit to compensating businesses in order to fully absorb the impact of the 2.5% wage increase. This commitment will also be reflected in the draft budget, which will be tabled in a fortnight's time. That was one point that employers representatives wanted clarified and appears in bold at the end of the document:

If the economic situation deteriorates

A new tripartite would also be held if the economic situation deteriorates "significantly" next year, according to the agreement.

The agreement also includes a, previously unknown, clause which states that if the National Institute of Statistics and Economic Studies (STATEC) determines that there is a risk of an "inflationary shock" in 2024, after the agreed-upon measures expire, a new tripartite would be convened to decide on the phasing out of the measures. The employers' demand to plan beyond 2023 is therefore taken into account.

The agreement also specifies that the 15% gas price cap will apply from 1 October 2022 until December 2023 and will be calculated based on the price level in September 2022.

The state contribution will be determined using a weighted average of gas prices and will apply to all customers with metres that have a maximum gas flow of less than 65 cubic metres per hour.

Another important measure is the freezing of electricity prices, to begin in January 2023. According to the agreement, this will apply to customers with an annual consumption of less than 25,000 kilowatt hours.

The remaining measures have all been announced previously: a 15 cent per litre discount on heating oil beginning in November, a temporary reduction in the three VAT rates, an energy bonus, a state contribution to the energy costs of retirement homes, and an increase in the minimum wage beginning in January.

As for businesses, the agreement states that they will be compensated for the "exorbitant energy prices".

The agreement makes no mention of exact expenditures for the various measures. This information will be included in the draft bills that will be introduced following the agreement.

A special parliamentary committee will write the laws, which will then be voted on at the Chamber of Deputies.