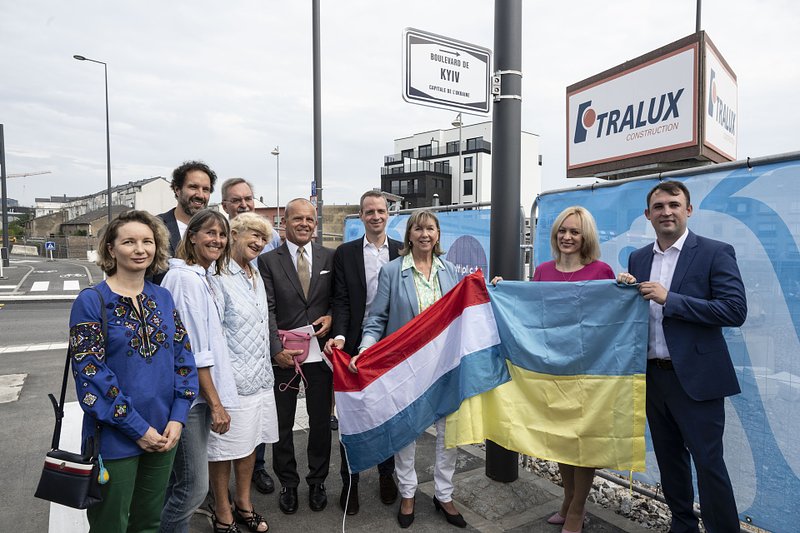 On Thursday, the members of Luxembourg City's municipal executive officially unveiled the road sign for the new Boulevard de Kyiv, a new axis in the south-east of the capital.

The event took place in the presence of Nataliia Anoshyna, Ukrainian representative in Luxembourg, Nicolas Zharov, president of the 'LUkraine' association, and representatives of the Ministry of Mobility, Public Works, and the Bridges and Roads Authority.

The City of Luxembourg wants to send "a strong message of solidarity, encouragement, and support to the Ukrainian people", and the signs now bear the inscription boulevard de Kyiv, capitale de l'Ukraine ("Kyiv Boulevard, capital of Ukraine").

To thank the City of Luxembourg, Mayor of Kyiv Vitaliy Klitschko expressed his personal thanks in a letter to Lydie Polfer, Mayor of Luxembourg City.

The Boulevard de Kyiv runs from Route de Thionville (junction at the petrol station on Jean-Pierre Buchler Bridge) to the municipal boundary at Rangwee. Partly bordered by the tram line and passing by the Dernier Sol and Lycée Bouneweg stops, the boulevard will make it possible to relieve Route de Thionville and reorganise traffic in the south of Luxembourg City.

The Boulevard de Kyiv is already open to traffic on the section between Route de Thionville and Lycée Technique Bonnevoie (LTB).