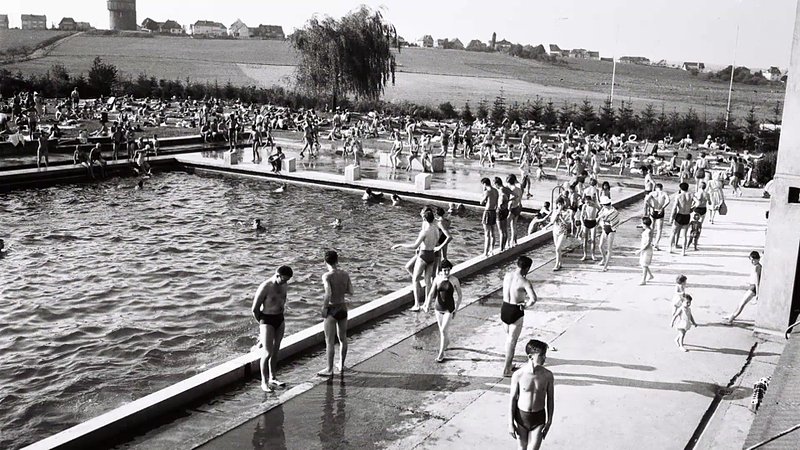 Our colleagues from RTL Télé went on a hunt for an open-air swimming pool in Luxembourg City.

A beach on Place du Théâtre. Cool, but not refreshing. An open-air pool would do the trick. One problem though: There is none in the capital at the moment. If you want to cool down at a pool, you have to go elsewhere in the country.

In the south, for instance, you might be tempted by the pools in Dudelange or Obercorn. In eastern Luxembourg, you can cool down in Remich or Grevenmacher. And in the north, there is the Aqua Park in Beaufort or the swimming pool in Troisvierges.

But what about the residents of Luxembourg City?

Over 100 years ago, the Bisserweg in Grund was the place to be. Here, people dove in head-first into the dammed Alzette river back in 1905.

Sometime later, in 1934, the Moulin de Gantenbein became a popular place to spend your free time. During the summer, residents used to cool down in the pools alongside the Alzette. And once winter came around, they simply switched the flipflops for ice skates.

Another popular place for summer refreshment was in Cloche d'Or, where the hotel with the same name on the old Route d'Esch featured a very popular open-air pool.

Many also made their way to another private pool owned by a different hotel. However, it is rather quiet this year in Dommeldange. While the pool still exists, it is currently closed for technical reasons.

This means that there is currently no open-air swimming pool for the 130,000 inhabitants of the capital. Serge Wilmes, a member of the municipal executive and in charge of urbanism and tourism, is well aware of this fact. Speaking to our colleagues from RTL Télé, Wilmes said that the municipality "is working on a project" for a public open-air swimming pool in the capital. The location is still an issue, but Wilmes hinted that "there might be an option available in the area around Kockelscheuer".

It goes without saying, however, that this project will not be completed any time soon. RTL Télé reporter Jeannot Ries was thus merely able to conclude that there definitely is a lack of open-air swimming pools.

All photos used in the report were provided by the Luxembourg City Photothèque.