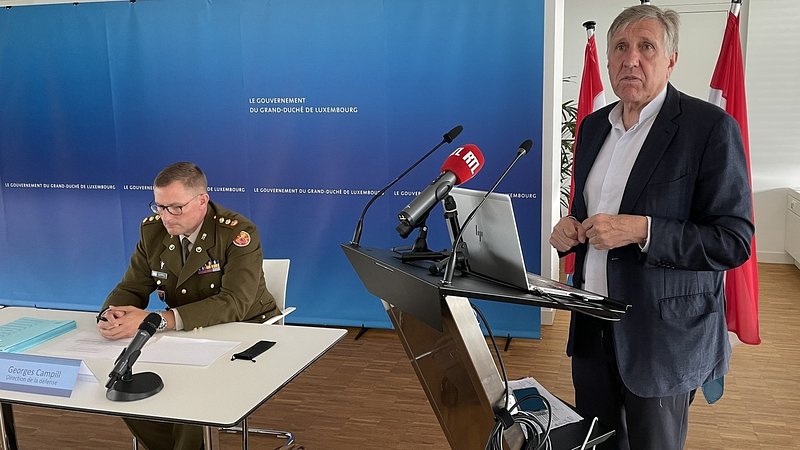 NATO demands that member states invest 2% of GDP - an unrealistic sum for Luxembourg, according to Minister of Defence François Bausch.

At NATO level, Luxembourg will be investing more money in defence in the coming years, Bausch announced at a press briefing on Friday morning. By 2028, this amount will be close to one billion euros, or 1% of the country's GDP. An investment of around 570 million euros is planned for next year.

The minister emphasised, however, that the capacity had to be expanded accordingly, which would take time. In this regard, he once again criticised NATO's demands at the 2014 Wales summit for member states to invest 2% of their GDP. For Luxembourg, this would be unrealistic, he said. For example, Luxembourg, as a country with an exceptionally high GDP, would be making a contribution that is six times higher than that of Latvia, who by comparison would be investing 2.14% of its GDP. Bausch went on to note that the GDP calculation did not take into account realistic targets and spend, as well as the availability of human resources.  "Spending more does not necessarily mean being more efficient and should not be an end in itself," he said.

Bausch also pointed out that Luxembourg's defence budget alone has increased by over 230% since 2014.

Lieutenant Colonel Georges Campill of the Directorate of Defence said the priority project is currently the Belgian-Luxembourg battalion. This will consist of 600 to 800 soldiers, and will be operational from 2028 onwards. But beyond that, Luxembourg plans to remain engaged in the same areas as before, namely intelligence, air transport, space technologies and cyber. Campill said funds would also be allocated to acquiring military equipment and establishing ammunition stock.

Luxembourg will announce their full trajectory towards aiming 1% contribution of the GDP at the NATO summit in Madrid at the end of June.

© Luc Rollmann
© Luc Rollmann
The photos published on this site are subject to copyright and may not be copied, modified, or sold without the prior permission of the owner of the site in question.