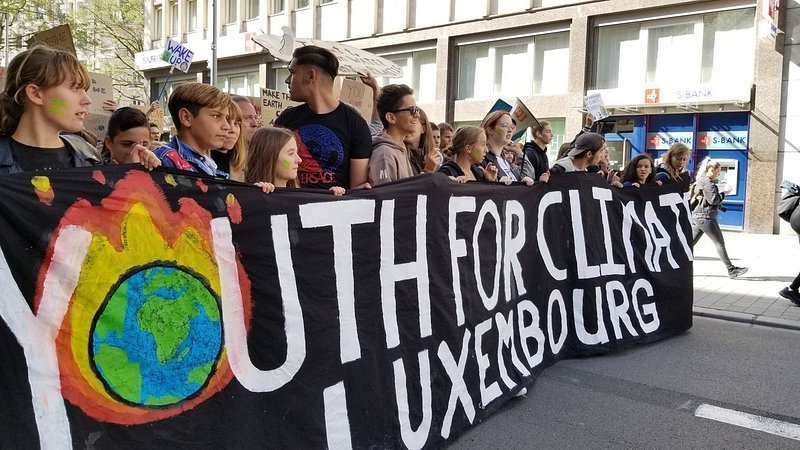 The youth climate movement will once again be striking on Luxembourg's streets, with a protest planned for 25 March to highlight the role of the financial sector in funding fossil-fuel industries.

The protest is the latest in a series of youth actions which have sought to help Luxembourg achieve its stated goals in the fight against climate change.

In September, Youth for Climate Luxembourg called a nationwide school strike and took to the streets of Luxembourg City.

This time round, they're inviting everyone - both young and old - to join them and Greenpeace Luxembourg, who they have joined up with under the slogan #PeopleNotProfit.

The march will start at Place de Clairefontaine at 2pm on 25 March. It will specifically target the Luxembourg Sovereign Pension Fund (FDC), which is currently revising its investment strategy for the next five years.

Protestors are expected to gather outside the FDC building on Avenue de la Porte-Neuve at the end of the march.

In a statement, Youth for Climate Luxembourg said that the FDC is 'the only pension fund for employees of the private sector in Luxembourg', yet 'is investing approximately 500 million euros in coal, fuel and gas industries every year.'

They are calling for the FDC to align its investments with the goal of the Paris Agreement to limit global warming to 1.5°C, and put an immediate end to funding dirty fossil-fuel industires such as coal, fracking and shale extraction. They are also calling for an end to all investment in nuclear energy.

The FDC state that they are 'committed to a healthy and sustainable economy', and in 2019 commissioned a dedicated report to look at their investment policy in light of the Paris Agreement.

This report, published in 2020, found that the FDC was close to being on track to meeting the higher 2°C target also referenced in the Paris Agreement, and stated that the fund outperformed similar portfolios due to a lower level of investment in fossil fuel industries.

Nonetheless, Youth for Climate Luxembourg are clear in their demand that the FDC must go further:

'The fact that our money is being invested in industries that harm the environment and endanger the lives of millions of people is unacceptable. People Not Profit!'.