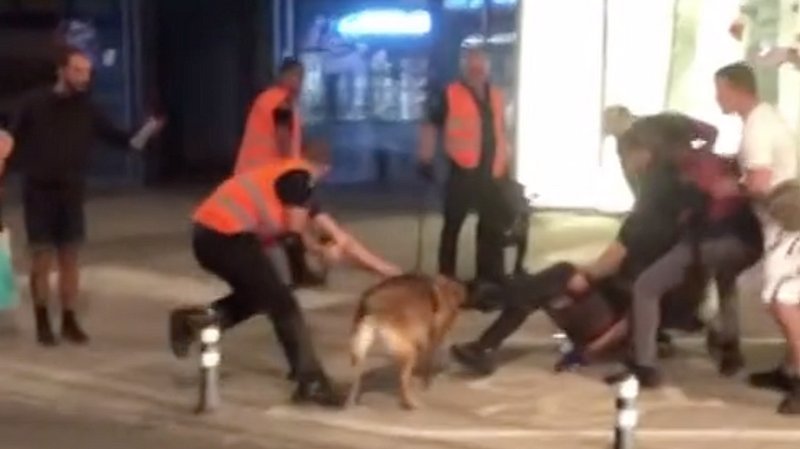 On Saturday evening, a man was bitten by a dog from the private security firm patrolling the Luxembourg City district.

Luxembourg City Mayor Lydie Polfer and councilman Maurice Bauer met with officials from the private security firm to discuss what happened in the run-up to the dog biting incident.

At the scene, an altercation between three men and members from the private security contractor Inter-Actions took place. Two of these respective men had already been arrested by the police, and it is the third man that can be seen being bitten by the dog in the video.

Mayor Polfer commented: "The guards from the 'At Your Side' campaign were patrolling the area when they observed a fight between two men outside of café Le Périgore. One of them was armed with a knife, and it was that man that we later saw in the video being bitten.

"The guards then alerted the police, but by the time they arrived, the armed man had retreated inside the café. Officers took away two other people. Later, around half past ten in the evening, guards returned to the scene, where they were then provoked and physically assaulted with chairs."

According to RTL sources, the altercation got out of hand after the man drew his knife and the security guards called for back-up. In the midst of all this ruckus, one of the dogs managed to lose his muzzle and bit the drunken aggressor in the leg.

The injured man was then taken to hospital, where he continued causing a stir. He allegedly spat at officers and tried to escape, which is why he was brought to a detention cell after being treated.

Mayor Polfer added: "For us it is clear that a group of dealers were defending their territory, which they did with verbal provocation and physical violence. We now have to await the results of the enquiry. I hope that police will provide security footage, after all, there is a system installed which could help clear up the matter

"I think the situation has clearly shown that the situation in the Gare district has gotten even worse. We also receive letters from locals saying that dealers are getting increasingly aggressive. We have to intervene!"