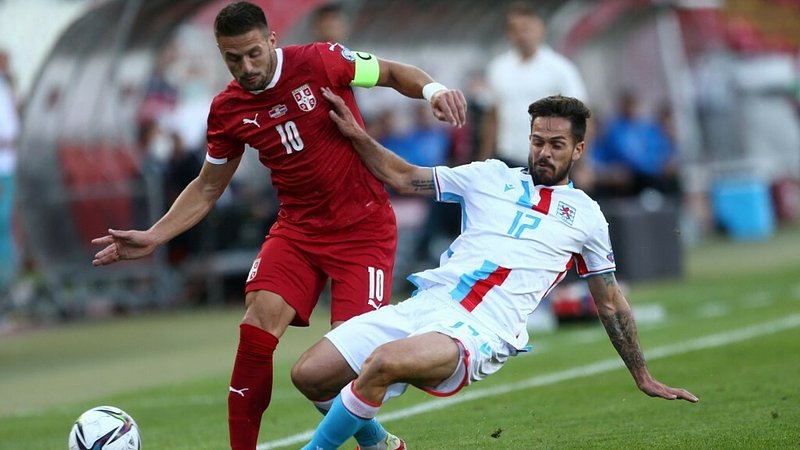 After Saturday's match, Luxembourg is now third in group A, which is currently headed by Serbia and Portugal.

The Red Lions did not manage to perform as consistently as they did in the win over Azerbaijan on Wednesday. Mistakes from the first half cost the FLF team in the end, which meant that three points in the World Cup qualifying went to Serbia.

Luxembourg's defence was challenged right from the beginning. Serbia played high pressure football and managed to get their first scoring change after 14 minutes. After a cross from Kostic, Mitrovic found himself in front of the Luxembourgish goal, but failed in the end to get a dangerous shot across.

Six minutes later, keeper Moris had to intervene for the first time and block a shot. In the 22nd minute, Mitrovic was in scoring position again and this time left no chance for the Luxembourgish goal keeper: 1:0.

After falling behind, the Red Lions struggled even more to get a hold of the game. In the 35th minute, Mitrovic scored his second goal of the night, thus increasing the lead for Serbia. The Fulham striker found himself unmarked in the penalty box and had little trouble converting the cross from fellow teammate Kostic.

Shortly before the half-time break, Barreiro managed to get a shot away for the Luxembourgish team. He missed the target, however, and both teams left the pitch at 2:0.

The Serbian team remained in control after the break, but reduced the pressure and intensity of the game. After 70 minutes, the Red Lions became increasingly dangerous in front of the Serbian goal. In the 77th minute, Olivier Thill received a decisive pass from Gerson Rodrigues and put the ball into the top left corner of the goal: 2:1.

Unfortunately, the momentum from the goal did not last long. After a failed pass from Moris, Serbia switched back into attacking mode and Mitrovic managed another dangerous shot on goal. Though the Luxembourgish keeper blocked the initial shot, the ball was deflected on to Chanot, who then inadvertently put it into his own goal: 3:1.

The end was to become even more bitter for the Red Lions. Gerson Rodrigues drew a second yellow card and was therefore sent off by the referee. Shortly after, Milenkovic extended the Serbian lead to 4:1.

In the end, the Red Lions thus lost to Serbia, deserving winners of the game and top of the table in the World Cup qualifying group A.