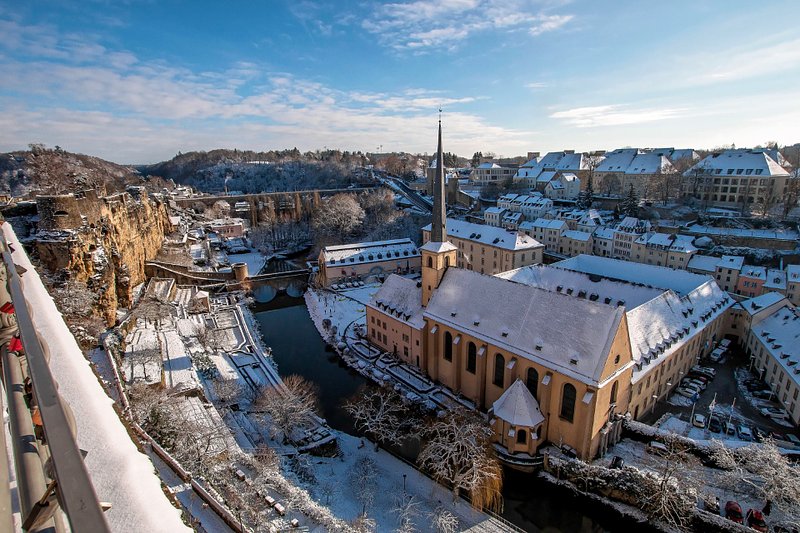 A joint investigation by various international newspapers reveals that astronomical financial sums, sometimes of dubious origin, are concealed in the Grand Duchy. The Luxembourg government has responded via a statement.

17 media, including Süddeutsche, Le Monde and Luxembourg's Woxx, carried out surveys for more than a year in an investigation titled "OpenLux", examining 3 million documents in the process and scanning the register of beneficial ownership.

The French paper concludes that "55,000 offshore companies" with no office or employee "whose value top €6.5 trillion" are registered in the Grand Duchy. 90% of these companies would be controlled by "non-Luxembourgers", Le Monde states.

The rich and famous are amongst those with links to the country, including billionaires, models, sportsmen, multinationals, artists and even royal families. "Tiger Woods and the Hermès family rub shoulders with Shakira and the Crown Prince of Saudi Arabia", Le Monde concludes, adding that of those 55,000 registered companies 17,000 are owned by French nationals.

Among the companies and accounts registered in the Grand Duchy, some of these funds are of rather dubious origin, even suspected of originating from criminal sources. The "OpenLux" investigation links companies to the Italian mafia or even the "Russian underworld", who hid their funds in Luxembourg. It would also include Italian political parties, Le Monde reads, including the far-right.

Other goods are less controversial. The investigation cites an "Ile-de-France castle owned by a Saudi prince", "a vineyard in the Var belonging to Angelina Jolie and Brad Pitt" or "an endless list of villas on the French Riviera and opulent Parisian apartments". The list is extensive, including chalets, helicopters and image rights.

The investigation again cites "anonymous investment funds" which are acquiring "whole swathes of metropolises like Berlin and London, causing real estate to flare up without being identifiable or paying taxes".

So why Luxembourg? According to the "OpenLux" survey, the Grand Duchy is the centre of the European Union, is an expert in taxation and its political and economic landscapes are stable. "But make no mistake: the dominant ones are taxation and discretion. They stem from political choices dating back to the time of former Prime Minister Jean-Claude Juncker (1995-2013), who became then president of the European Commission", says Le Monde.

According to the newspaper, if Luxembourg has turned its back on the practices that resulted in the "LuxLeaks" scandal, the country would not be equipped to control the funds that pass through it, citing a lack in personnel: "The trade register only employs 59 people to ensure compliance with the legal obligation to declare the beneficial owners of more than 100,000 entities..."

Read also: We trace every infringement we can find: Claude Marx
Read also: €48 billion in Belgian money invested in Luxembourg

At two minutes past midnight, the government issued a press statement in several languages on the articles that would be published on Monday morning, strongly refuting "the various allegations". They believe "the authors also make a number of unsubstantiated assertions about the Luxembourg economy and the financial centre."

It statement reads that "Luxembourg is fully in line and compliant with all EU and international regulations and transparency standards, and applies, without exception, the full arsenal of EU and international measures to exchange information in tax matters and combat tax abuse and tax avoidance. Neither the EU nor the OECD have identified any harmful tax regime or practices in Luxembourg."

"Luxembourg provides no favourable tax regime for multinational firms, nor digital companies, which have to abide by the same rules and legislation as any other company in Luxembourg." It furthermore argues to have boosted the number of employees in the Financial Sector Supervisory Commission (CSSF) to 1,000 employees.

Any payments made or received in cash that amount €10,000 or more are subject to scrutiny, requiring the individual to identify their client as well as the beneficial owner of the transaction.

According to RTL information, the publication of the "OpenLux" survey will be discussed in a committee in the Chamber of Deputies this Monday morning. Finance Minister Pierre Gramegna and Justice Minister Sam Tanson will be present.

The Luxembourg Government takes note of the publication of a series of articles in the international press concerning alleged shortcomings in the Grand Duchy's anti-money laundering arrangements and refutes the various allegations. The authors also make a number of unsubstantiated assertions about the Luxembourg economy and the financial centre.

Luxembourg is fully in line and compliant with all EU and international regulations and transparency standards, and applies, without exception, the full arsenal of EU and international measures to exchange information in tax matters and combat tax abuse and tax avoidance. Neither the EU nor the OECD have identified any harmful tax regime or practices in Luxembourg.

Luxembourg provides no favourable tax regime for multinational firms, nor digital companies, which have to abide by the same rules and legislation as any other company in Luxembourg.

Luxembourg is a stable, triple-A rated country with an open, diversified economy focused on high-added value services and industry, including financial services, automotive industry, information technologies, biotech and cleantech, as well as satellite and space technologies. Many industrial groups have production facilities as well as R&D and innovation centres in Luxembourg.

Luxembourg is also home to one of Europe's main international financial centres: many of the world's leading financial institutions, asset managers, and insurance firms have established their EU hubs and centres of excellence in Luxembourg. Multinational firms from across the globe leverage the financial sector expertise of the country to centralize their cross-border financial activities, from corporate financing to treasury and cash pooling.

Fully aware of its responsibility as an international financial centre, Luxembourg continuously assesses and updates its supervisory architecture and arsenal of measures to combat money laundering and terrorist financing (AML/CFT) and applies all EU and international regulations as well as the FATF (Financial Action Task Force on Money Laundering) recommendations.

Luxembourg authorities in charge of AML closely cooperate with each other as well as their peers in other jurisdictions. In line with the growth of the financial centre, the Financial Sector Supervisory Commission (CSSF) has doubled the number of its employees over the past seven years to reach 1 000 staff to date, a high figure even in absolute terms and commensurate with other major financial centres. Its staff in charge of the fight against money laundering is constantly increasing, having grown by 46% over the last three years alone.

Companies in the regulated financial sector, as well as business service providers, including lawyers, notaries, chartered accountants, auditors and other accounting and auditing professionals, as well as bailiffs, real estate agents and developers, authorized free zone operators, virtual asset service providers, certain dealers in goods and works of art to the extent that payments are made or received in cash in the amount of € 10.000, are all subject to the obligation of due diligence, which requires the professional to identify his client as well as the beneficial owner of the transaction, and to report any suspicious activity.

More recently, Luxembourg was one of the first countries in Europe to set up a public Ultimate Beneficial Owners Registry (UBO). Importantly, it is one of the only European Union countries to have opted for a completely open and transparent registry, which is accessible, online and free of charge, without any restriction to the public (including journalists). The UBO, which is obviously only one tool among many to ensure AML compliance, and the data it holds are continuously being assessed and improved where necessary. At the end of 2020, the completeness rate of the register was around 90%.

Given that Luxembourg is fully compliant with and has implemented all applicable EU and international rules and standards with regards to tax transparency, the fight against tax abuse as well as AML/CFT – and even gone beyond these requirements – Luxembourg rejects the claims made in these articles as well as the entirely unjustified portrayal of the country and its economy.

Having been contacted prior to publication of the articles in question, the Luxembourg authorities have given extensive feedback to the questions raised. More details and facts can be found here: www.openlux.lu