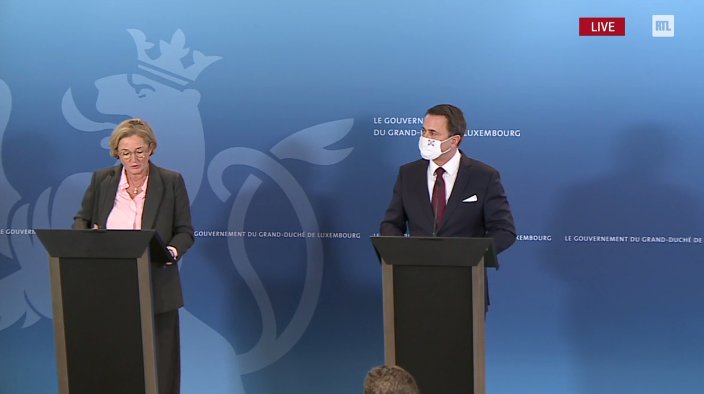 As stated by the Prime Minister last week, the number of infections in Luxembourg is still too high, despite plateauing for the last couple of weeks. In order to avoid overwhelming hospitals, new restrictions will be introduced later this week. The Chamber of Deputies is set to vote on the amended Covid laws on Wednesday, with the new measures coming into force from Thursday.

The current curfew will be extended to 15 December. The government will re-evaluate the situation in 2-3 weeks, according to Bettel, before deciding on future measures.

Both Bettel and Lenert said they hoped to avoid a full lockdown and the associated collateral damage, but in order for the measures to work, people must accept a temporary reduction in social contacts.

Restaurant and cafés will close for three weeks, as will cinemas, indoor playgrounds, and gyms.

Households will be able to mix with a limit of just two people outside the household - this includes children and infants.

Indoor sports will temporarily be put on hold, with the exception of physical education in schools, and professional sporting clubs.

Shops will remain open, but Bettel asked the public not to turn a grocery shop into an "outing". Masks are still mandatory, as are other barrier gestures.

Both ministers appealed to the public to exercise further personal responsibility, explaining the 2 person limit was designed to discourage households from mixing at all. They urged people to reduce their outings, only leaving home for essential trips.

Last week, it was announced that schools would operate on an A/B system for certain classes until the end of the term.

"Time to apply the handbrake"

The Prime Minister said he understood people's frustrations, and that no doubt there would be criticism that the measures were too much, or not enough. However, the goal is to manage the situation in hospitals. 181 people are currently in hospital receiving regular treatment for Covid, while 45 patients are in intensive care - most of whom are relying on ventilators.

Bettel said it was necessary to go without certain freedoms for a short amount of time, in order to avoid a full and lengthy lockdown in future. He said he expected households to mix more freely over the festive period, but only if the number of infections could be controlled over the next few weeks. The three-week period will prove crucial in managing the current situation.

Lenert added that vaccination centres would be introduced as part of the long-term plan for coping with the virus. In a press conference last week, the Prime Minister said he thought the first vaccine would become available in Luxembourg from mid-December. Although the details are yet to be confirmed, it is thought the first batch of vaccines will cover around 23,000 people. At a recent briefing, Lenert said the vaccines would be distributed to certain groups as a priority, including 7,000 employees in the healthcare sector, 90,000 people aged 65 and over, and 132,000 vulnerable members of society.