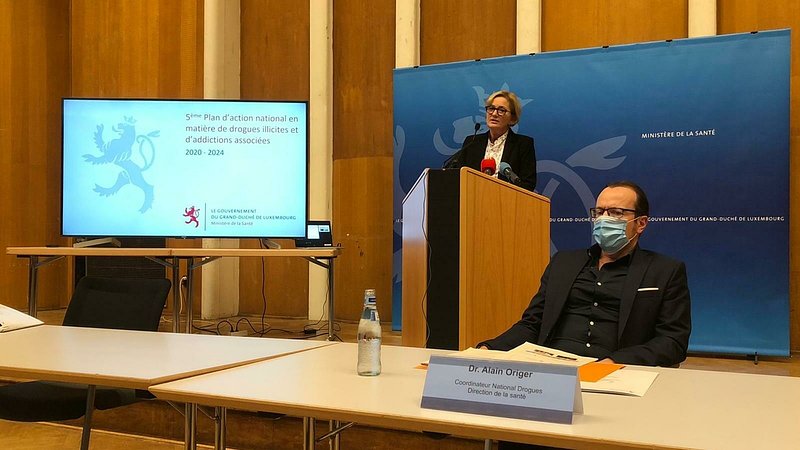 Minister of Health Paulette Lenert confirmed that work on the cannabis legalisation project in Luxembourg was progressing, even though it had been delayed by the outbreak of the coronavirus pandemic.

The aim of the fifth national plan on illicit drugs for the period 2020-2024, presented at the Ministry of Health on Monday, is to reduce the demand and supply of drugs. Minister of Health Paulette Lenert and the National Drugs Coordinator, Alain Origer, were delighted that the vast majority of the actions provided for in the previous plan had been carried out.

It has been found that the most commonly used drugs are cannabis, cocaine and ecstasy, and that cannabis is more attractive to teenagers aged 15 to 18. Other findings: Luxembourg is below the EU average for overdose deaths and HIV infections are falling sharply.

Dr Alain Origer explained that one of the major projects, albeit costly, of the fifth national plan was the creation of a therapy centre for minors. Around 50 young people are currently being accompanied in therapy abroad: health-care professionals are working with them in Luxembourg before and after the therapy. However, according to Dr Origer, there is a real need for such a therapy centre in Luxembourg.

Held back by the coronavirus pandemic

Paulette Lenert confirmed that work on the cannabis legalisation project had been going on for months, even though it had been delayed by the outbreak of the coronavirus pandemic. As this is a sensitive issue, the authorities are communicating less on the subject, but work is progressing.

All this is also part of the government's prevention policy. Lenert stressed that it was not the government's intention to legalise cannabis because it was "cool". It has been found that more and more young people are using this substance, but also that the quality available on the market is becoming increasingly dangerous. There are also more and more people who need help because of their consumption. The product is therefore becoming increasingly dangerous, according to the minister. The idea is to create, through legalisation, a new market, which will make prevention more effective.

According to the National Drugs Coordinator, Alain Origer, it is also a question of keeping up with the times, because cannabis is no longer what it was ten years ago.