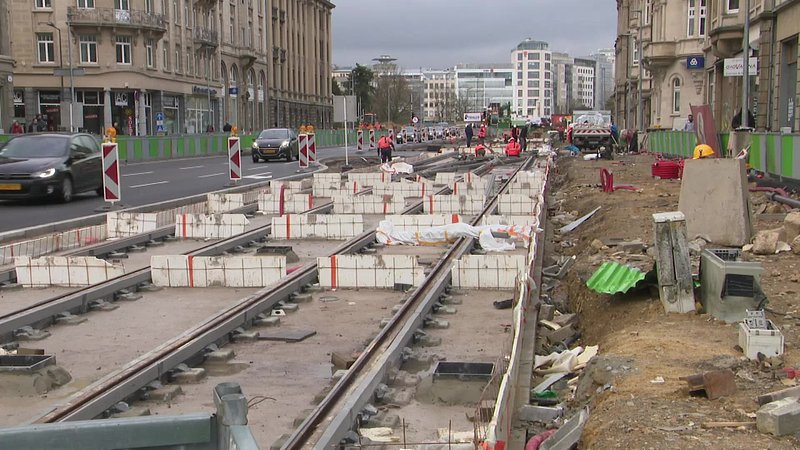 Luxembourg has had a tram in operation since 10 December 2017, but for some time now, parts of the capital have been subjected to bus detours and increased traffic thanks to the ongoing construction site.

Initially, the tram only connected Luxexpo with the Red Bridge, but has since extended to Place de l'Étoile. There are currently extension works taking place to allow the tram to continue on to the Central station in Luxembourg City.

By the end of 2020, the works should be complete and the tram should connect Kirchberg through to the Central station. At a later date, the route should be extended to include Luxembourg Airport in Findel and the Cloche d'Or area in Gasperich.

At the New Year's Reception, Luxembourg City mayor Lydie Polfer said we must continue to grit our teeth when it comes to tolerating ongoing construction sites. The tram works will continue to cause traffic issues, which means those passing through the capital must continue to show patience.

Ongoing projects surrounding the tram do not simply concern its route - Luxtram is planning on rolling out its faster trams by 2027/2028.

As for how work is progressing on the route between Place de l'Étoile, a French construction team has been carrying out work while Luxembourg's construction sector has been on collective leave, which ends on Wednesday. So far, underground work has been completed, and current work concerns laying the tracks along Avenue de la Liberté.

With the stretch of the route expected to open by September 2020, the Ministry of Mobility and Public Works is due to put in another request to be exempt to the sector-wide collective leave that lasts throughout August. Ministry adviser Frank Vansteenkiste explained that the ministry will request the exemption in order to benefit from reduced traffic along Boulevard Royal and Avenue de la Liberté, as working through the collective leave period would speed up progress considerably.

He added that the construction site requires 'cumbersome work' that would cause a significant amount of traffic chaos along Boulevard Royal, which is why the ministry hopes work can be carried out over the course of August.

As for the transformation of the avenue, the route no longer boasts four lanes for cars and buses. Instead, these have been limited to two and the remaining two are designed for active mobility, including pedestrians and cyclists. The trees that adorned the avenue are also due to be replanted by the end of January.

In terms of future projects, the Chamber of Deputies has approved legislation to begin work on connecting the tram to Findel. In a first phase, a bridge will be built over the motorway to allow the tram to bypass the motorway traffic. Vansteenkiste hopes that the tram will be able to connect the airport to the Cloche d'Or area by 2023. Elsewhere, Polfer explained, work begins on extending the tram towards Strassen. This will allow a number of buses to be replaced, a move the city authorities plan to replicate in areas of Hollerich and Kirchberg as well.

Vansteenkiste confirmed that Minister for Mobility and Public Works Francois Bausch hopes to introduce corresponding funding legislation to the Chamber of Deputies and government council before the end of the legislative period.