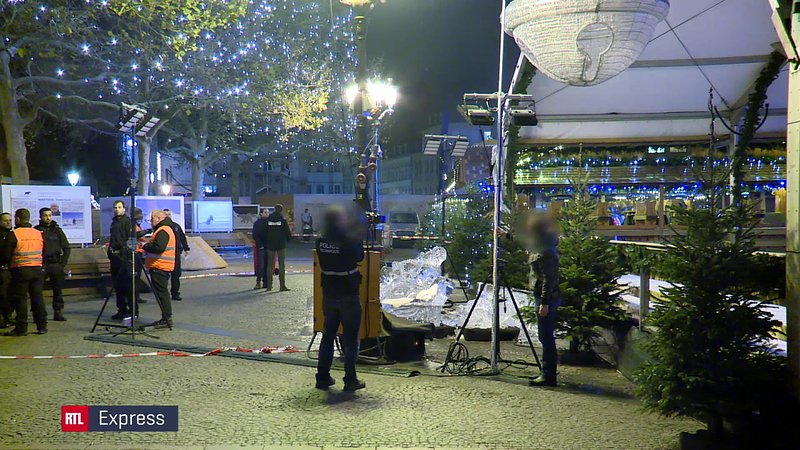 RTL freelancer Loïc Juchem was at the Christmas market when the tragedy took place. He recounted his memories of the horrible incident.

Individual pieces of ice, flowers, and candles commemorate the tragedy that occurred in Luxembourg City on Sunday evening.

The public prosecutor's office has confirmed that the victim was a two-year-old boy. He succumbed to his injuries in an ambulance after being hit by a block of ice when the statue collapsed. One of our freelancers and journalists, Loïc Juchem, was at the scene when the incident took place.

Sleep did not come to him that night, Juchem explains. "An image that I cannot get out of my head is the shoe of the boy, that they later retrieved from the ice sculpture. It was a horrible evening."

Juchem and his girlfriend were on their way home. Around 8 pm, the couple passed the ice rink on Knuedler, and saw that the ice sculpture had broken. "Shortly later, I heard people screaming and the father threw himself against the ice rink out of desperation. Many people did not really know what was going on, it was a very weird atmosphere."

Press conference: Ice sculpture designed to be interactive, not cordoned off

Emergency services arrived shortly later, and the entire area was sealed off. "It became clear in these minutes that the condition of the child was very critical. I also talked to other people and we were quite sure that it would not end well for the boy. The ambulance was here for quite a while, it didn't drive to the hospital right away - which gives an indication that it's not looking good."

Rumors started to circulate that children had climbed around on the ice sculpture. Juchem cannot confirm that this is true but concedes that the area around the sculpture was not secured. "Seeing the ice sculpture now, it's hard to imagine that it could collapse this quickly. I think the dangers of the whole thing were underestimated," Juchem concludes.