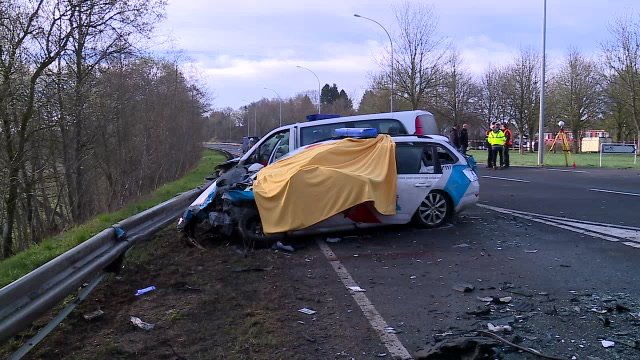 The public prosecutor's office of Diekirch has announced the charges in the fatal Lausdorn affair nearly a year after the incident occurred.

The Diekirch public prosecutor's office announced via a press release that the investigating judge in the Lausdorn affair of 14 April 2018 has charged two individuals in the ongoing inquiry.

Around a year ago, a police chase in Lausdorn led a collision between two police vehicles. The police officers had been chasing a motorist who had fled from a routine traffic check. In the collision, a police officer died on the spot and another sustained life-threatening injuries.

As the press release states, two people have been charged in the investigation. The motorist who fled the police check has been charged with manslaughter, unintentional harm, rebellion, and drink driving.

The second individual charged by the public prosecutor's office is the police officer driving the police van that crashed into the other police vehicle. His charges consist of manslaughter and unintentional harm.

How did the accident happen?

A driver left a restaurant during in the early hours of Saturday 14 April 2018. He turned a corner, noticed a significant police patrol doing traffic checks near Wemperhardt and instead drove towards Weiswampach. The man eventually stopped his dark blue Audi S5 at a car park of a petrol station in Weiswampach, hiding from the officers.

Two officers had chased the man in a police vehicle, followed by a police van. The police officers drove through Weiswampach unaware that the motorist in question had hidden himself. Driving on from Weiswampach, the police vehicle stopped a blue Skoda to ask the driver if they had been overtaken by a dark blue Audi.The accident then happened as the lead police vehicle turned, at which point the police van collided with the first vehicle. The police officers did not have their seat belts on, although this was not out of the ordinary. In police chases, officers may have to leave their vehicles quickly.