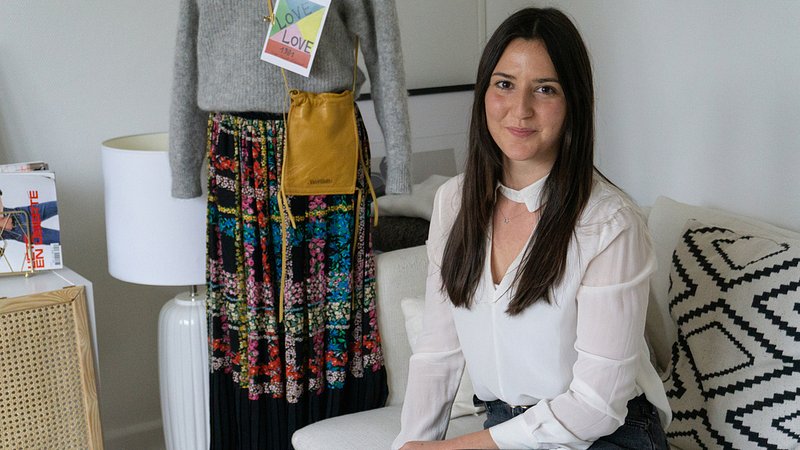 Second-hand shops are pretty rare in Luxembourg, but there are more than you may think. This series introduces a new second hand shop every week.

PARDONMYCLOSET is the brainchild of Caroline Poincelot and Martha Launay. Having met at work shortly after moving to Luxembourg five years ago, the two French ladies bonded over their common passion for second-hand clothes and started hunting down Luxembourg’s second-hand stores.

Being used to Paris’ vast choice of items, they ended up rather disappointed with the state of the local second-hand market from back in the days and decided to add a bit of spice to the mix by organising regular second-hand pop-up stores, amongst others in Luxembourg’s Galeries Lafayette. After almost two years of working simultaneously full-time jobs and organising their pop-ups, Caroline will now be taking over PARDONMYCLOSET as her full-time job. We sat down with her to talk about her plans for the future, her vision of the second-hand vintage market and the appeal of pop-up stores.

When did your personal love story begin with second-hand?

I started buying second-hand when I was about 14 years old. I didn’t have a lot of money back then, but still wanted to be stylish and fashionable. Second-hand was my way to go. I became a regular at Croix-Rouge and found a lot of very nice vintage stuff. One of the first pieces I bought second-hand and still love nowadays was a big Chloé Faye bag. I saw it in a second-hand shop in Versailles and instantly fell in love with it. When I saw that it was being sold for less than half the retail price, I immediately bought it and haven’t looked back ever since (laughs). Nowadays, I still buy a lot of second-hand items, because they’re cheaper and it’s better for the environment. Even if I don’t want the items anymore, I can usually resell them again because they’re from bigger brands and people are always on the hunt for those items. So it’s nice to treat yourself without harming the environment even further.

Why did you decide to start off with pop-up stores?

When we first had the idea, we were both working a full-time job that was taking up a lot of our time so we put the whole thing off for a while. When we changed our jobs, we started having a bit more time on our hands, but it was still a full-time job. We didn’t want to wait much longer though, so we decided to start with pop-up stores as it allowed us to get started without having to commit to a second full-time position. Our first pop-up was in September 2019 in the private members club ‘House 17’ which we were really happy about. It’s such a great place with all its high ceilings and beautiful parquet floor and the location really complemented our needs and expectations. The first pop-up was a real success and helped us show that second-hand can be really modern, that you can look stylish in it and that everyone can find something for their taste. From there on, we decided to do a pop-up every three months and have been increasing ever since. 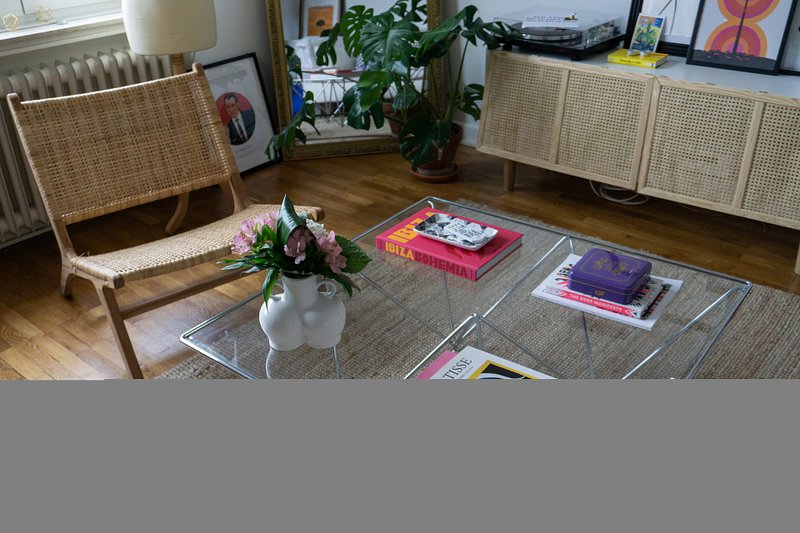 How do you go about sourcing your items?

When we started off, we first cleaned our own closet. We had been in Luxembourg for about three years at the time, so we knew a couple of girls already and asked them if they wanted us to help them clean their wardrobes. The first girl we asked gave us about 50 items and by the time our first pop-up came around, we had over 500 pieces and there was even a Chanel bag amongst them. A great start, if you ask me (laughs). From there on, it just started spreading. Our friends would tell their friends and they’d tell their friends, and so on. Then, we contacted every person we were friends with on Facebook which has proven to be very effective, too. And after our first pop-up, people started messaging us themselves to offer their items. So now, we mainly work with a ‘dépot-vente’ system.

Who is the PARDONMYCLOSET shopper?

In the beginning, we thought our target market would be young ladies like ourselves: working women who want something different, maybe French girls who live in Luxembourg. That’s also why we went for this whole Parisian style in that first pop-up, but we quickly realised that our clientbase is a lot more diverse than that. It goes from 15-year-olds who are on the hunt for beautiful tops and dresses for reasonable prices, over working women who are conscious of their environmental impact and want to contribute to a more circular economy, all the way up to older ladies who are looking for new and interesting finds. Since Luxembourg is so multicultural, we also have people from all different sorts of backgrounds which is amazing, especially when it comes to deposits - you can find so many interesting brands that you might’ve never heard of.

What have been your biggest challenges so far?

In the beginning, it was really the selection process, because we didn’t know what could and what couldn’t be sold, so we’d choose items based on what we personally liked. But we had to learn quickly that just because we like something, it doesn’t necessarily mean that it can be sold - and vis versa. Since we have such a diverse clientbase, we always need to make sure that there’s a variety to our offer, but now that we’ve got the hang of it, we actually really enjoy the selection.

You’ve been having regular pop-up corners in Galeries Lafayette as well. How did that come about?

Ever since we knew that Galeries Lafayette was coming to Luxembourg, we wanted to be the first second-hand pop-up store that’s featured. We knew that in France, they used to include a lot of second-hand stores and had multiple programs in relation to sustainability, so they are very conscious and open to try new things. At the time, we were thinking of doing a pop-up in LaDurée and we got on so well with the manager, that we just asked him if he doesn’t know anyone at Galeries Lafayette who could help us with our request. He got in touch for us with a lady who worked there. Shortly afterwards, we were asked to do a presentation and to come in for a meeting. We offered to do a collaboration and they agreed which was such a pinch-me moment, especially since we had only started PARDONMYCLOSET a couple of months ago at the time. We did our first pop-up last September and it’s been going so well ever since.

What makes that collaboration work so well in your opinion?

I think people were not used to seeing second-hand clothes in Galeries Lafayette, because it’s such a big department store and usually, it’s all about consuming different brands and in-mass. With us there, it’s like two opposite worlds were colliding. But I think that’s what makes it so great as well, because it shows that, even though it's a big department store, they’re still always looking at ways to introduce something new, sensibilise their existing customers to sustainability and address a new type of customer in the process. So, it’s really a win-win situation for everyone. 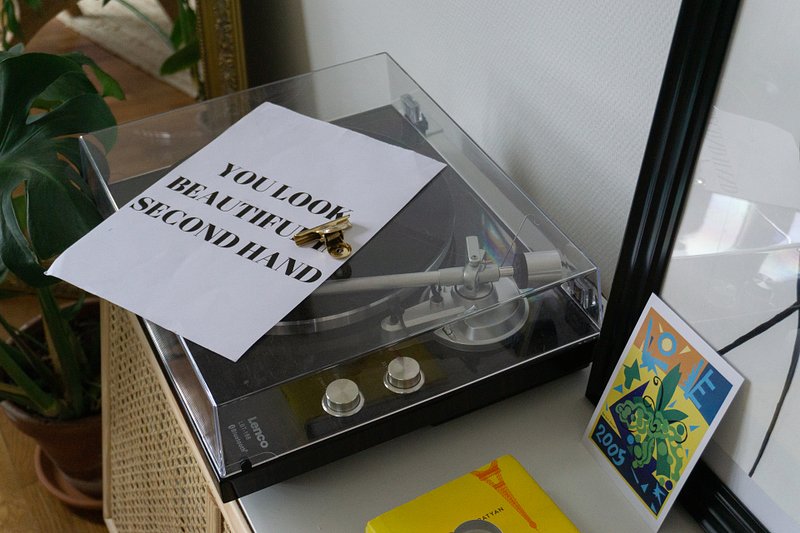 You recently had your first pop-up post-lockdown. How did it go?

It was crazy (laughs)! We opened at 10 and there were already a bunch of people who came in immediately. And it stayed busy the whole day. It was amazing to see all the people again and I feel like they missed it, too, especially because with the pandemic we’re pretty limited as to what we can do, so this was something ‘new’ to do. Pop-up stores are like having a ‘rendez-vous’. People know that we’re not around all the time so they have to come that specific day if they want to browse through the offerings.

How has the pandemic affected the second-hand market here in Luxembourg?

I think that the pandemic has generally had a huge impact on people’s lifes, but also on their world view. The crisis has helped to make people more aware of their surrounding, needs and purchasing choices, and it’s also given them a lot of time to clean their closets, which explains the vast amount of deposits we recently got in (laughs). But even before the pandemic, the Luxembourgish second-hand market was changing a lot. There’s more and more second-hand stores and pop-ups emerging and it’s becoming trendier by the day, which is obviously helping our cause a lot.

We’ve recently launched our e-store which has been under construction for quite a while, so that’s really exciting. Then, we have our next pop-up store this Saturday, 15th May, in Gallerie LaFayette, and I’m currently looking into renting a space full-time in Luxembourg-City. I think that we’re ready for that next step and having a permanent shop, will really show how big people’s interest truly is. So we’ll see how I get on with that!

Pardonmycloset
© Valeria Wiwinius
The photos published on this site are subject to copyright and may not be copied, modified, or sold without the prior permission of the owner of the site in question.
Most read
More news