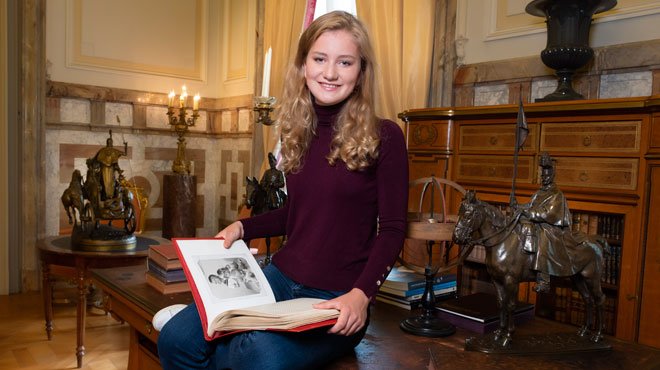 Her childhood, studies, and her first steps into public life: the princess raised to be a Queen.

Born in Brussels on 25 October 2001, Princess Elisabeth Thérèse Marie Hélène is the oldest daughter of King Philippe and his wife Mathilde. Since her father's accession to the throne on 21 July 2013, and the repeal of Salic law in 1991, she has occupied first place in the order of succession. Eventually, she will become the first Queen of Belgium in her own right.

Princess Elisabeth, named for her great-great-grandmother, carried out her first public appearance for National Day celebrations on 21 July 2006. The following year, she attended the presentation of the model for the future polar station named in her honour, alongside other members of the royal family.

In September 2011, she performed her first official activity in the presence of her parents, at the inauguration of the UZ Gent paediatric wing bearing her name. Three years later, in October 2014, the princess, who also holds the title of Duchess of Brabant, gave a remarkable speech in the three Belgian national languages, to mark the commemoration of the centenary of the First World War in Nieuwpoort. She also christened a patrol boat for the Belgian navy, the P902 Pollux, in an official ceremony in Zeebrugge on 6 May 2015.

That same year, the princess attended events for the international Queen Elisabeth music competition, alongside her mother Queen Mathilde. Elisabeth has two younger brothers, Gabriel (born 20 August 2003) and Emmanuel (born 4 October 2005), as well as a younger sister Eléonore (born 16 April 2008). Educated in Dutch since 2004 at the Saint-Jean-Berchmans college in Brussels, the Duchess of Brabant began attending the Atlantic College in Wales in summer 2018, with a view to obtaining an international baccalaureate in 2020 after having passed the selection exams organised by the Belgian Committee of United World Colleges (UWC).

In June 2019, Princess Elisabeth carried out her first official overseas mission, accompanying her mother on a trip to Kenya.

The two royals visited the second largest refugee camp in the north-west of the country and a slum established near the capital Nairobi on behalf of Unicef, before meeting with members of the Maasai community. For the first time, the young Duchess of Brabant shared her impressions with journalists covering the event.