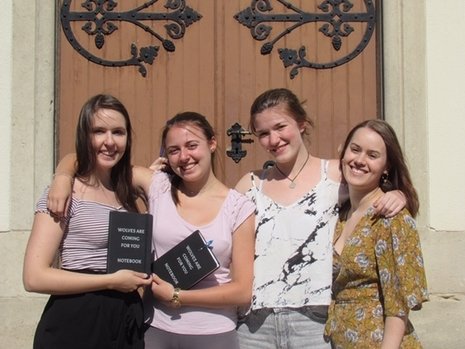 The cast of Wolves Are Coming For You: Céline Planata, Gina Millington, Hayley Dawson, and their designer Lina Peller / © BGT Luxembourg

This year, the BGT chose to perform Joel Horwood's thought-provoking play "Wolves Are Coming For You" at the International School of Luxembourg's Studio Theatre. We had a chat with the actresses that will be performing from 5 to 7 September.

What is the play really about in your eyes?
Céline: It's about rumours being circled around a small, tight-knit community that wolves might be entering their habitat. There are a lot of political connotations about immigration, and about outsiders in our society today. It's a lot about human connections and how we help and hinder each other in life, intentionally or not.

Gina: There's a lot of tension, it's very focused on relationships and different stages of life... all the characters are very different from each other.

The play differentiates from others in the sense that you're the only actresses and have to play multiple roles simultaneously, what is the challenge about bringing this script to life?
Gina: There's the basic things of characterisation, for example in your body and in your voice. The last thing you want is for the audience to be confused about who you're playing at the moment, so you really need to differentiate them in every possible way. Because it's not a naturalistic play (we're shifting characters in front of their eyes, we use the audience in an interactive way, ..), a lot of detail has to go into each character.

Hayley: There aren't many long scenes, and therefore quite abrupt character changes. And that is a challenge, because you don't just have to automatically change your posture, your voice, and costume, but the biggest challenge for me is changing the way I communicate with other characters.. it's a really big mental shift.

How do you get recognition in Luxembourg, a country with a rather minimal theatrical scene?
Gina: It's tricky, because I think the theatre scene her isn't exactly thriving. There's also the barrier with the languages, the fact that there isn't one main dominant language in which theater companies can compete the way they do in cities like New York and London, its not as prominent here. So just getting people on board to even start a new production is a challenge.

Hayley: In terms of Anglophone theatre, it's all quite on an amateur level. There are maybe one small professional group, but the main groups (New World, BGT) are all amateur theatre. We're just lacking the competitive atmosphere, no one is really seeking recognition here, it's more for fun.

Gina: It's nice, though, because there's great connections between the groups and a feeling of community. 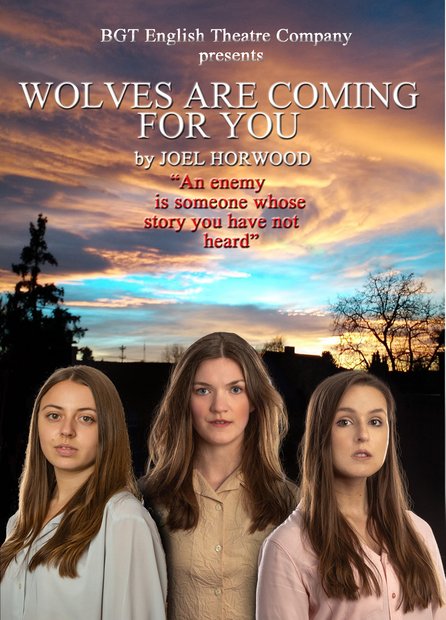 What are the major lessons you learned during your theatrical training so far?
Céline: When I was a child, I was used to being the lead in all the plays I did, but then I did a workshop at Boston Children's Theatre that came to Luxembourg all the way from the U.S.. There I realised that there are so many talented people in the world, and it was almost a shock to me, I really needed to think about my future relationship to theatre. Am I going to try this and put everything into it, or am I going to leave it for those who know what they're doing? But I decided to give 110% in everything I do, because I can't get by doing the minimum anymore and getting all the leads... Now it's time to make a shift: I have to know what I'm doing and throw myself into this completely to get with people on that level.

Hayley: It's hard for me to pick out one specific moment where there was a specific shift. In the theatre group in our school, you could always tell a difference between the kids that were doing it for fun and those that felt a certain passion for it and cared for putting on a good performance. I  was one of those kids that cared more about it than others, and when I started doing plays outside of school and Tony Kingston (the director) casted us for the 2014 production of 'Little Women', that inspired us to take it further. We now felt that we could perform outside of school for people that aren't just our parents. So it was some sort of escalation, you start taking classes in London to see what your competition is, and you get pushed further the more you do it. So it's definitely not one moment, but rather an escalation.

Gina: It's definitely an unhealthy addiction: you just finish a play but then you want to do another one and another one. You want to do something that challenges you in a different way, I think if you want to propel forward in something like this it's really about how much you want to explore of it yourself. An actual technique that I learned that pushed it forward is the Meisener Technique, it taught me how much the theatrical profession revolves around empathy and expressing human truths. It just has to be authentic and that makes it so much more special when you're part of it.

What do preparations for such a production look like?
Gina: It's been a very interesting process. From the start, we've been meeting every day of the week, its usually a 3-hour rehearsal. Sometimes, we even have up to 7 hours, with rehearsals going past midnight, because the way we've been working is very experimental: we work a lot with improvisation. It's a lot about drawing inspirations and finding things in the characters.

Hayley: All three of us are very involved in the creative process, so we're not just sitting back and taking orders, but we with Tony are creating the play.

Céline: We all have notebooks and are expected to come in with ideas about character development.

Gina: Yes, and he's constantly asking us 'Do you like this?' or 'Would you change that?'. It's a very inclusive process and very different from the traditional directorial approach.

Céline: Not a project for people that are too indecisive! You have to figure out your opinions and express them.

What will the audience be thinking when they're on their way home after the play?
Hayley: It's hard to tell, it's got quite an ambiguous ending, so there will be a lot of feeling of 'what happens next?'. You never know which character the audience will like, or relate to, because they are very raw and honest characters. We as actresses have also had plenty of shifts about which characters we like or dislike. I can't wait to see what their reaction will be, because I couldn't tell at this point.

Gina: It's going to be so much fun, though. The whole play isn't your conventional theatre setting. First of all it's more of a round stage, so there isn't a fixed angle of the stage, and there will be interaction with the audience, making it a very unique experience.

Céline: I think they're going to leave and want to be kinder to the people around them. The play really values the compassion you show towards others in life, and most people will leave wanting to show that compassion, too.

Tickets and more information about the BGT Company and their play are available at the.bgt.lux@gmail.com .