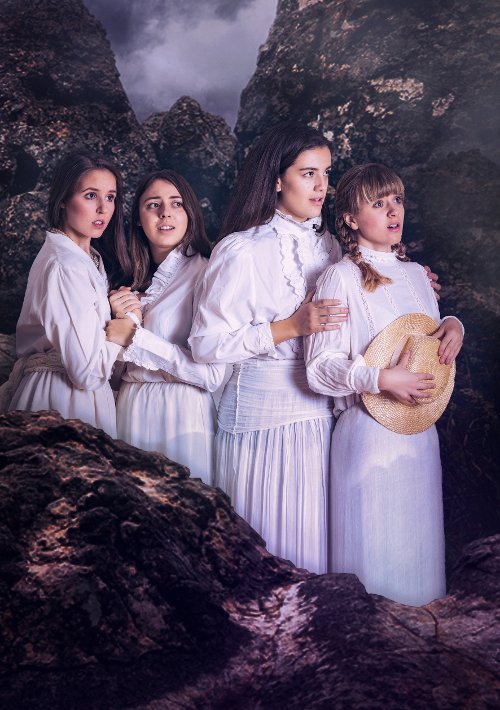 The B.G.T. English Theatre Company will be presenting “Picnic at Hanging Rock” in English at the Centre Culturel Neumünster this coming 24-26 April.

The play is based on the novel by Joan Lindsay. It has been newly adapted for the stage by Tom Wright.

“Picnic at Hanging Rock” is considered one of the great mystery stories of the 20th century. On Saint Valentine’s Day 1900, in the heat of the Australian late-summer, a party of school girls from Miss Appleyard’s Private Girls’ School goes on a day trip to the local geological wonder, “Hanging Rock”.

Off to explore a rock

In the sleepy haze of the afternoon, four girls set off to explore the rock … but three of them, and one school mistress, disappear without a trace!

The ensuing search for the girls and the effect their disappearance has on the occupants of the school and on the local people leads to rumours and recriminations.

Long-suppressed truths, sexual desires and obsessions surface which shake the late-Victorian order of the school.

When one of the girls is found on the rock some weeks later, largely unharmed but with no memory of the events, the atmosphere reaches a boiling point which threatens to tear lives in the community apart.

Written in 1967, Joan Lindsay’s classic novel – supposedly based on real events, but never confirmed - looks at the destructive tensions which develop when mankind tries to impose regulation on nature and on wild emotions.

Miss Appleyard’s School is a paragon of Victorian order and moral discipline, teaching girls to behave correctly and control their desires. But over it hangs the menacing shadow of Hanging Rock, “a carbuncle in this anti-Eden”, a symbol of the dark power of nature which is ready to erupt at any point.

Tom Wright’s brand-new adaptation of the novel, premiered in Melbourne in 2016, provides a new edge to the story by having all the roles, male and female, played by five women. Written in blank verse, he brings a vivid life to this haunting and enigmatic story.

Founded in Berlin, now in Luxembourg

The BGT (Berliner Grundtheater e.V.) was founded in Berlin in 1991 and is dedicated to producing a wide range of English-language plays, while integrating players of different nationalities. Its repertoire includes shows by authors including Peter Shaffer, Anthony Minghella, Oscar Wilde and William Shakespeare, as well as original scripts.

In addition to playing many seasons in Berlin, the company has also performed the Edinburgh Fringe Festival and at anglo-German festivals in Germany. It is now based permanently in Luxembourg.

The former prison workshop, at other times known as Tutesall, is home to a 283-seat theater which is equipped for music, plays, dance, movies and projection conferences. The gentle and warm aura of the room, the velvety darkness, the overpowering presence of wood, the soaring ceiling, the lighting, the openings to the outside and the spectacular aspect of the Krudelspuert (door of the fortress exposed during the construction of the Wenzel circuit) give this room a very special aura. An atmosphere of intimacy can be felt, no borders separate spectators from the actors or the orators, the first row of seats having been installed on the massive dark wooden planks of the stage.

This magnificent auditorium is named today after Robert Krieps, Minister of Justice and Culture, who, as a former deportee imprisoned at the age of 17 in the Grund prison, had the idea and the will to transform this former place of detention and sadness, into a place of culture and exchange.