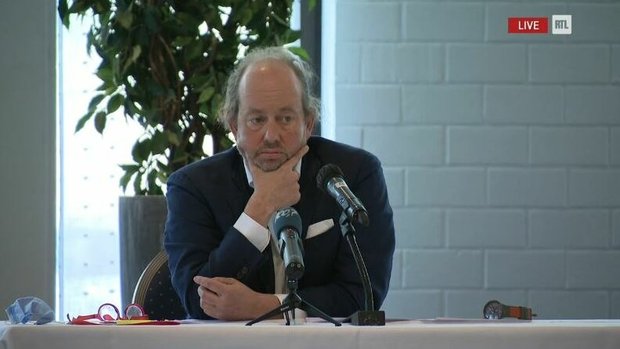 In trying to justify a decision that is on the face of it unjustifiable, today's press briefing from Hôpitaux Robert Schuman was a masterclass in how not to handle a scandal.

Our analytics tell me that today's press briefing led by Minister of Health Paulette Lenert attracted far more reader attention than the one hastily called at Robert Schuman which started just as the aforementioned Lenert briefing drew to a close. That's a shame, because it was far more interesting.

I'm sure most of you know the background already, but for those of you who do not, the briefing at Robert Schuman was called as a response to the scandal surrounding the vaccination of three board members, who reportedly did not meet the criteria for this phase of vaccinations. One of the board members who received vaccination was Jean-Louis Schiltz — and in the interest of transparency, I should note that Schiltz also serves as President of the board of CLT-UFA, a subsidiary of RTL Group with interests in RTL Luxembourg.

While Lenert declared it was 'case closed' for the affair earlier this week, Pirate Party MP Sven Clement disagrees. Today's press briefing - in which Schiltz and other representatives of Robert Schuman attempted to provide a defence and justification of the decision, but largely managing to point fingers in every direction but their own - showed that the case should be anything but closed.

"I will not accept lectures on morality"

This quote from the press briefing pretty much summarises the whole ordeal, which was characterised by a complete unwillingness to accept responsibility or admit a lapse of judgment. In his opening remarks, Schiltz noted that planning of the hospital's vaccination strategy began on 14 December, and that a meeting on 13 December 'did not specify that directors should not be vaccinated'. Before opening the floor to questions, Schiltz summarily declared that he would not have his morals questioned in this regard.

That's disconcerting, because if there's one thing you would hope that the board member of a healthcare institution should accept in the midst of a global pandemic, it's that ethics and morality are of fundamental importance in guiding their decisions. Not accepting questioning of your own morals indicates a view that your compass is infallible, and given that the whole affair is one of poorly tuned ethical compasses, the stance is baffling.

So, no apology was forthcoming, despite the fact that other hospital groups did not vaccinate their board members. This, said Schiltz, was a matter of interpretation: the government had told them to secure hospital staff, and their interpretation was that this includes members of the board.

That's where Clement's argument comes in.

We have contracts, "even if it's not written"

Pirate Party MP Sven Clement noted that vaccinations were clearly destined for hospital employees with work contracts. In response to that critique, hospital director Claude Schummer said earlier this week that the recommendations were too vague, and that while not strictly front-line workers, the board members were integral to the hospital's operations.

In today's briefing, Schiltz too responded to the critique, noting that they do in fact have contracts with the hospital, adding the somewhat puzzling caveat that the contracts may not be written.

That wasn't his only line of defence, as he also aligned himself with Schummer's earlier statement in saying that they didn't want to risk bringing the virus into the hospital, as they frequently meet with hospital management, for instance Schummer. His continued mantra was that it was all in the interest of securing the hospital environment, which is what they had been instructed to do.

The question was then raised of whether he has an office at the hospital, which he confirmed that he does not. Nor do they frequent meeting rooms at the premises, but Schiltz did state that he visits the facilities three times per week, so could therefore bring the virus onto the premises if infected.

This line of justification, then, was that it was their "civil responsibility" to vaccinate board members, as it would have been irresponsible for directors to enter the hospital continuously without vaccination. And they do have to go to the hospitals, because Zoom meetings were found to bring with them too many issues, leading to people "missing things."

In summary, the justification is that they are contract-less contracted staff who are in frequent contact with hospital leadership, and this contact means that they would risk bringing the virus in if not vaccinated. Fair enough?

Well, no. If frequent contact with hospital staff was a justification for vaccination, then surely the family of doctors, nurses, cleaners, maintenance workers, receptionists, and other hospital employees who are in much closer contact with doctors and nurses should be a priority over and above board members who meet management staff a few times a week for a meeting that could be held virtually. It's difficult to share a house with your spouse "virtually" - one might argue it is, in fact, far more difficult than dealing with troublesome technology for work meetings.

All in all, it beggars belief that the decision was made to hold this briefing, and that they seemingly agreed that the best approach to dealing with what could have been a fairly minor scandal was to stand their ground in the face of justified criticism.

Asked by a Wort journalist if he would have acted differently knowing what he does today, Schiltz basically said no. He would still insist that everyone be invited to receive vaccination, in spite of priority groups. But, he said, they are taking the reactions seriously.

The problem is, they absolutely are not taking reactions seriously. At least that's not the message that was communicated today. Rather than a level-headed explanation and apology, what we received was a series of leaky arguments justifying their own prioritisation, a statement of moral infallibility, and the conclusion that Schiltz thought himself "too old" to resign or indeed continue the defence much longer.

The overall impression was that all us young'uns were making too much of a fuss, having not understood the complex moral reasoning that led to non-contracted contracted board members receiving a vaccine ahead of their turn, and that in any case age meant that any talk of stepping down was out of the question.

Oh, and lets not forget that some unnamed "other hospital" (CHL?) had received about 700 doses more than Hôpitaux Robert Schuman, which was "not fair".

Move on, kids, nothing to see here - go look over there instead!

We were also told that their being vaccinated did not take vaccines away from anyone in need of one. With vaccine supply a constant source of criticism and debate, this line of reasoning is particularly hard to understand. We are now in phase 2 of vaccinations, and last time I checked, not everyone vulnerable due to age (75 and over), with trisomy 21, undergoing cancer treatment, or with congenital immunodeficiencies, for instance, has been vaccinated.

The decision to hold this briefing was without doubt exceptionally ill-advised, and the approach they took to tackling the criticism was the opposite of what a seasoned PR consultant worth their hefty fee would recommend. But in the end, it may have been for the better. At least now we know where they stand, and we can be certain that the affair should be anything but closed.