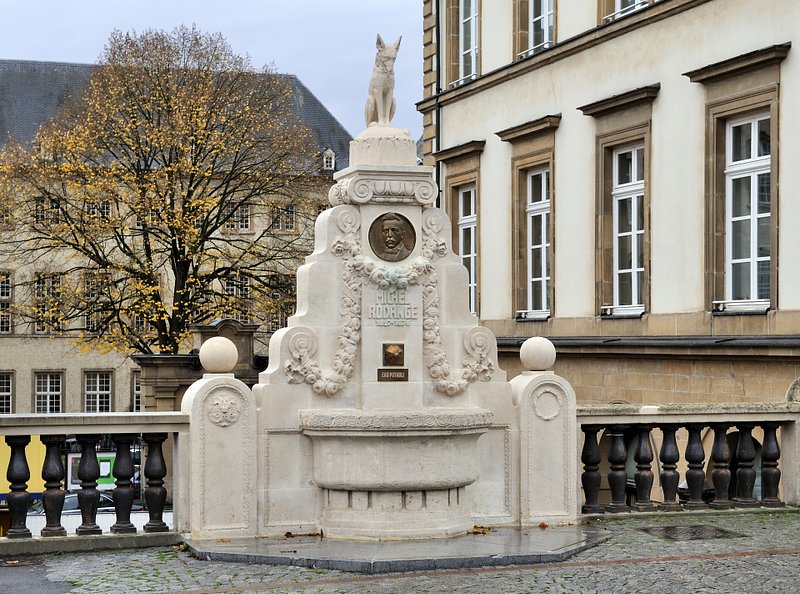 Michel Rodange's Renert is among Luxembourg's most influential literary works. Discover the fable about a cunning fox's schemes to the top, the biting political satire behind it all, and why we should still care about an almost 150-year old story today.

Literary classics are part of every country's contribution to world culture. Often, they even define a people and, when properly read and understood, can broaden the minds even of contemporary readers. Today, the spotlight is on what some may consider to be one of the most important works of Luxembourgish literature: Michel Rodange's Renert oder de Fuuss am Frack an a Maansgréisst (Renert or the fox in a tailcoat and in human shape): How did Rodange come up with the idea? What is it about? And maybe most importantly: Why should we still care about this story today?

The story behind the story

Renert is an adaption of the famous German author Johann Wolfgang Goethe's Reineke Fuchs, which is itself based on medieval source material. A number of fables with the devious fox as their protagonist circulated in Medieval Europe, a number of which were streamlined into the very popular Reynke de vos, a story which was first written in Middle Low German and published in Lübeck, Germany in 1498. 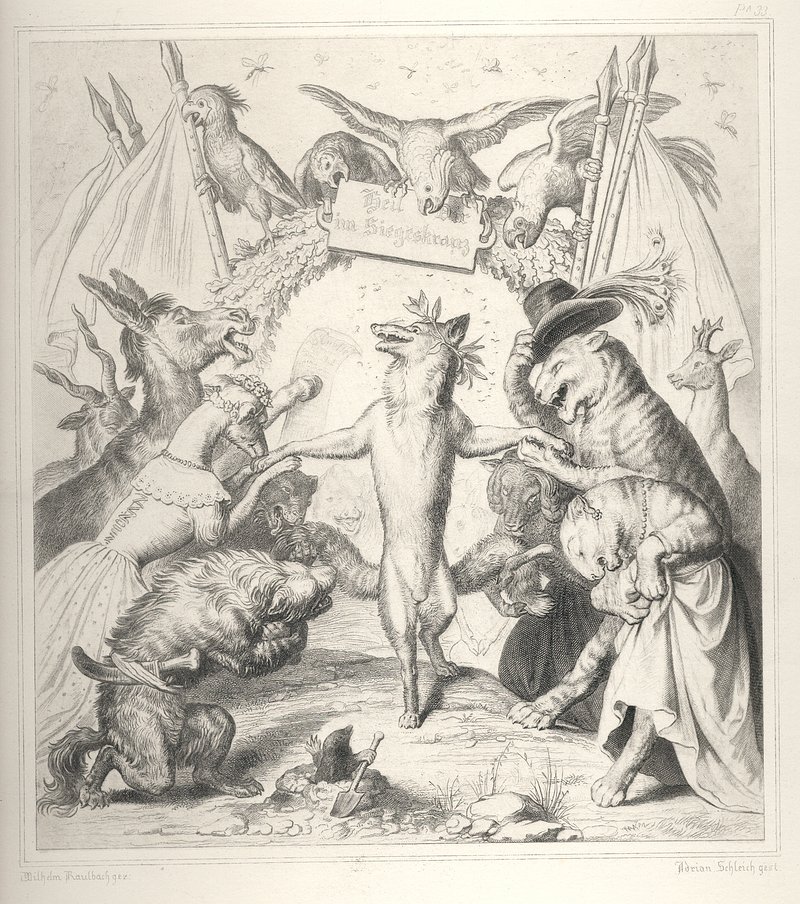 While the base storyline remained mostly the same, it was Goethe's version that introduced a very overt satirical nature to the story, sharpening the criticism it delivered and giving it a mocking, if not malicious, tone.

As Renert was first published in 1872, it is impossible to ignore the Luxembourg Crisis in 1867 and the following Franco-Prussian War of 1870/71 as important historical backgrounds. The 19th Century was marked by the rise of nationalism and even the tiny country of Luxembourg was trying to find out where its future would lie.

It was during these chaotic times that Rodange wrote what some may consider to be the most famous piece of Luxembourg literature to date. And he used it to deliver some merciless criticism against the society of his day and age.

Rodange's Renert begins with an assembly of animals all gathered around their king, the lion. The fox, Renert, has not come, in fact he has been the cause of much sorrow for the majority of the animals present at the assembly.

Due to the many complaints and the heinous crimes the other animals accuse Renert of, the lion decides to summon him for a trial. The bear is chosen as the messenger, but due to his greed for honey, Renert easily manages to lure him into a trap, leaving the bear horribly mutilated. The cat is chosen as the second messenger, but Renert manages to find this animal's weakness too and comes out on top yet again. Finally, the lion sends the badger, Renert's nephew, who manages to get his uncle to confess his crimes and agree to come with him to the assembly.

Renert is sentenced to death by hanging but asks the lion for one final speech. In it, Renert mentions a great treasure, which has been stolen from him, as well as a conspiracy to overthrow the king. The fox's ruse works as he is set free by the lion, who wants to know more about the treasure and the conspiracy against him.

After many more lies and ruses on Renert's part, the lion finally acknowledges the fox's real intentions and orders an assault on Renert's castle. The badger decides to warn his uncle, who confesses more crimes to his nephew and tries to justify his behaviour.

Renert finally returns to the assembly for a second trial during which he once again uses his wits to his advantage and finally ends up duelling the wolf. While the wolf is far stronger than Renert, the latter ends up winning the duel by relying on dirty tricks which leave the wolf horribly mutilated by the end. Even though not very chivalrous, the lion acknowledges Renert's victory and awards him the title of Baron.

Knowing and understanding Rodange's Renert is not only useful if your favourite pastime includes showing off your cultural muscles to your colleagues and friends. There is a lot to be learned from this famous fable, but for the sake of streamlining this particular article, let's focus on two key points: Culture and Politics.

If you want to bring your Luxembourg knowledge to the next level, then there is simply no way around the Grand Duchy's obsession with its favourite murderous fox. Several places have been given names that directly connect them to Rodange's tale – basically, whenever you see a café, restaurant, or any other type of public building with a Fuuss or Fiischen in its name, chances are fairly high that the name ties back to Renert. 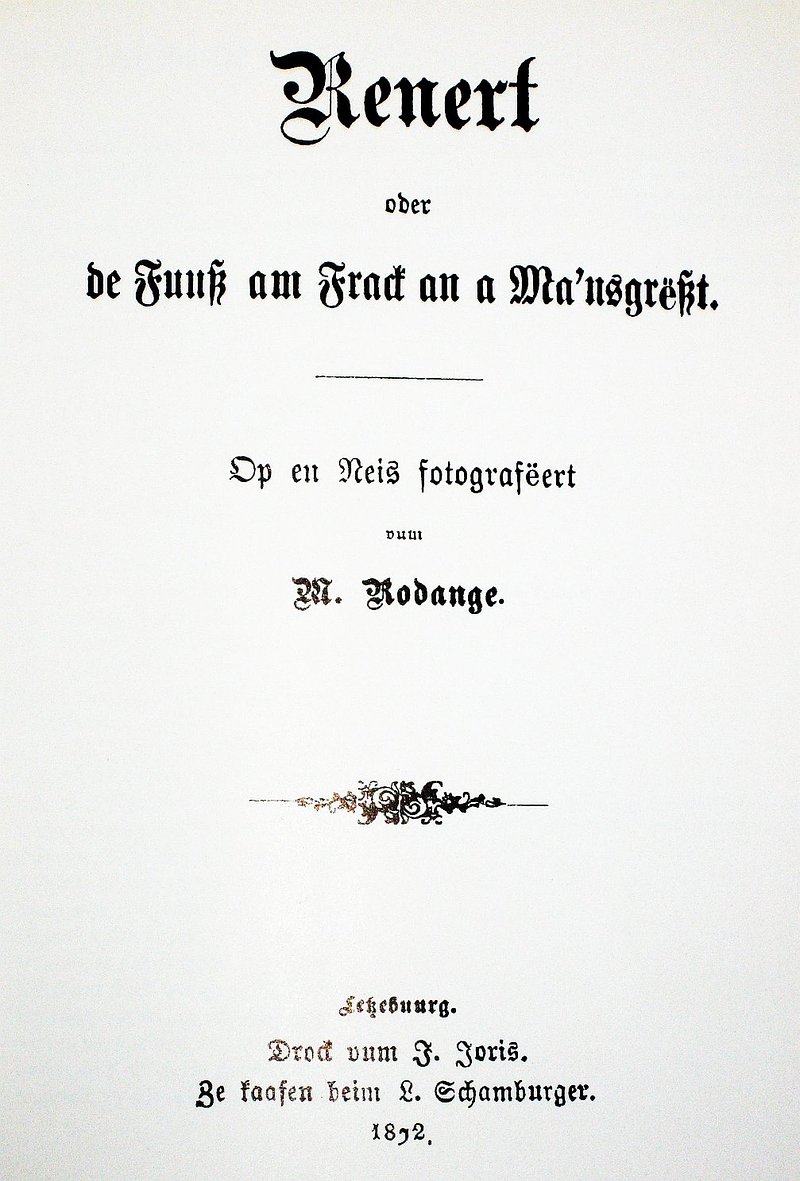 A facsimile of the first edition of Rodange's "Renert" / © Wikimedia Commons

Language buffs are also guaranteed to have a blast with Renert. Not only was it a huge deal at the time that Rodange wrote his fable in Luxembourgish at all, but he also made sure that every animal spoke in the local dialect corresponding to the region in Luxembourg where they are from. The fable is also a goody bag filled to the brim with references to the historical and political context of the time. At the beginning of August, Knowledge Bites looked at the life and songs of De blannen Theis, a blind violinist whose songs were also fundamental in the creation of what one might call a "Luxembourgish culture", and he too makes a guest appearance in Renert.

Similar to Theis, however, Rodange's fable was ignored, and in fact shunned, for a very long time. The author of Renert was very critical of the world he lived in, and the biting satire this text delivered with every line was not much appreciated by the elites of the time.

Renert mercilessly mocks almost every single part of society: From the buffoonish rulers, who think they're the greatest of all despite being overwhelmed by the tiniest bit of responsibility straight away, to the far-from-holy priests, who let paedophilia run rampant in their ranks and abuse their power to satisfy their selfish desires, to the industrial magnates, who shamelessly enrich themselves at the cost of everyone else, to the ignorant masses of ordinary citizens, who get exploited and fooled by everyone and content themselves with applauding the one, who seems to come out on top at the moment.

While reading this last paragraph, you may have realised how incredibly topical all of Rodange's criticisms still are. Indeed, reading works like Renert today should not be something left to university students and professors. Works like these connect us with the minds of those that came before, and sometimes these songs of the past might just give us some inspiration for the future.

The eponymous protagonist Renert is far from being a sympathetic figure. Even for an anti-hero, the fox is far too ruthless and violent. However, in some of the most famous lines of the fable, Renert demonstrates that he is fully aware of this, justifying his actions by stating that he is only doing his best to win a game that is rigged from the start.

Renert was never intended to be the solution to a problem. In fact, the character exists purely to denounce the complete unfairness and absurdity of an entire system. A system which may not have changed that much since Rodange's times, as modern readers of this timeless fable might find.