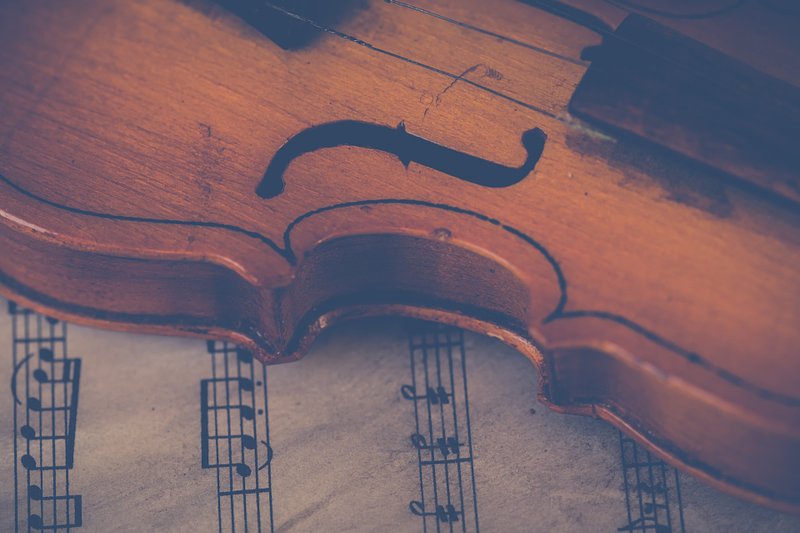 There are many different ways to get to know a culture. Some may read about it, watch documentaries, or visit museums. Others may prefer a more enjoyable approach by tasting some local delicacies. Another great way is to meet up with some locals, buy them a few drinks and listen to what they sing once the alcohol loosens up their tongues. Folk songs are a great way of peeking inside the minds of a people while picking up some slang and local humour along the way.

We start our dive into the world of Luxembourgish folk music with someone who might be considered one of its "founding fathers". While he most likely never wrote any songs himself, he was one of the first to collect and play popular songs in Luxembourgish and thus contributed greatly to the development of a sort of national consciousness of the Luxembourgish people.

A life shrouded in mystery

Mathias Schou was born on 30 March 1747 in Grevenmacher. While a birth certificate has been lost to time, there is a certificate of baptism, so he may have been born one or two days prior. In Luxembourg he is mostly known under the pseudonym "De blannen Theis" which literally translates to "blind Theis" (Theis being a common abbreviation of his first name Mathias). It should be pointed out that it actually states on his certificate of baptism that he was "mal voyant" which means that he did not see well, so the extent of his blindness is up for debate. Depending on the source, you may sometimes find his name being cited as Mathias Gelhausen. This is a mistake and stems from a confusion between him and another blind musician from Grevenmacher called Johann Gelhausen or "Blanne Pully". On a very peculiar side note, it actually appears that there were a lot of blind musicians around at that time. Some other include "Blanne Mäerten" (Martin Holweck from Vianden), or "Blannen Dittchen" (name and life unknown). 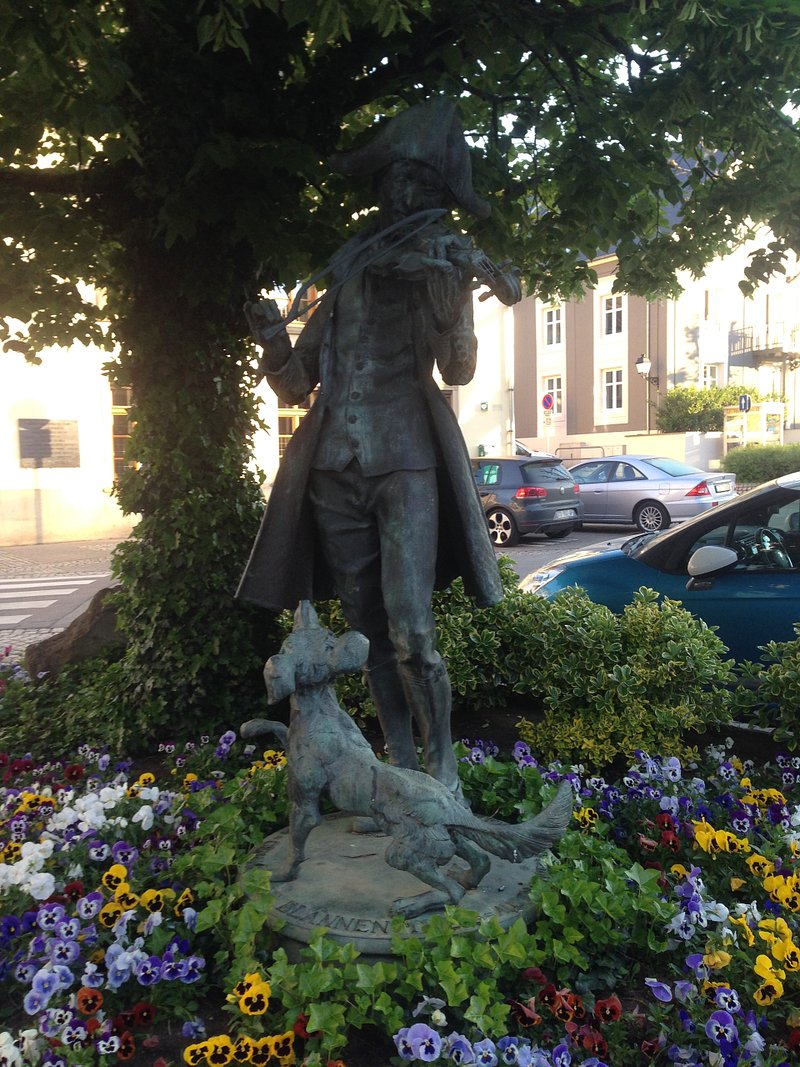 Statue of Theis by artist Will Lofy in Grevenmacher / © Shutterstock

As mentioned before, Theis was a wandering musician. At the time they were quite popular entertainers and were often hired to perform during weddings or other private events. They also tingled from farmer's markets to town fairs all throughout the country in order to entertain people. In a way, one can think of them as the DJs of pre industrialised Europe.

Not much is known about Theis' private life. We do know that he was married twice, first to a woman called Margaretha Kummer, whom he allegedly referred to as "Mimi Gréit" and after she died to his second wife Barbara Kremer, called Barbe. Both of them joined him on his travels as did his dog. Theis' act consisted of him playing the violin and singing his songs while his wife danced to them.

Songs of a people and a time

As mentioned at the beginning, Theis was one of the first in Luxembourg to systematically collect folk songs in Luxembourgish. This makes him a quite significant figure, not only culturally but also for the overall spread and development of the Luxembourgish language, as the most popular folk songs at the time were all in German. His repertoire included classics of Luxembourgish folk music such as:

The songs he sang allow us to catch a glimpse of life in Luxembourg during the 19th century. The lyrics tell the story of a rural population, they deal with family affairs, religion, nature, and even the Luxembourger's affinity for alcoholic beverages, e.g. in Zu Arel op der Knippchen ("On the little hill in Arlon") which focuses in particular on the parties women seemed to celebrate in Arlon (and how they tricked their husbands into giving them more wine by pretending to be sick). The song is also known and popular in the Belgian province of Luxembourg and the bells of the Saint-Donat church situated on the famous Knippchen (meaning "little hill") in Arlon play the well-known melody every hour.

Vice and – supposed – virtue are, however, often not far apart, and songs like Et war e Meedche vu Gëtzen ("There once was a girl from Goetzingen") show us to which extend the Catholic church had a tight grip on society at the time. The lyrics tell the story of a young woman who liked to party and in general lived a quite promiscuous life. When she wanted to find a husband, however, not one man wanted to settle down with her. The song ends with the very patronising message that young women should learn from the girl from Goetzingen and make sure they lived lives deemed more "appropriate" at the time. It should be pointed out here that there exists a great alternative version of this song called Et war ee Meedche vu Lëntgen ("There once was a girl from Lintgen"). The girl from Lintgen is depicted as being almost comically religious and ends up getting impregnated by a priest while in the confessional in a great example of the Luxembourger's cynical form of humour.

Most songs were nevertheless meant to entertain and the stories they told were often very humorous. More in the spirit of Zu Arel op der Knippchen was for instance Den Éim Steffen, a song about a farmer who wants to sell wood chips for "10 coins a package" in Luxembourg City. In a somewhat depressingly hilarious simile to our own time, the people of the capital complain about the steep prices and send Steffen home. There, his wife and his 14 (!) children wait for him and he has to confess that he did not manage to sell any wood chips. The song then ends with Steffen's wife beating her husband up in an ending that surely made the people of the time roar with laughter.

A beggar's death and late recognition

Theis had to retire at 65 years of age as his health slowly deteriorated. Despite being the son of quite important and wealthy parents, he himself ended up very poor towards the end of his life and had to be supported with food and clothing by the hospice in Grevenmacher. He died without a penny in his pocket on 17 October 1824 in Eisch.

He later became famous throughout the entire country thanks to the help of one of Luxembourg's most famous authors. Edmond de la Fontaine, known as Dicks (please rest assured that "Dicks" is a perfectly innocent name in Luxembourgish), made him the subject of his poem De blannen Theis. Dicks was also gifted the only portrait of Theis in 1851 by someone called Jean-Pierre Schou, very likely a family member of Theis. The author later left the portrait in his will to the National Museum.

Theis also appeared in other monumental works of Luxembourgish literature such as Renert by Michel Rodange. While his significance and popularity increased eventually and especially in the context of an emerging Luxembourgish national identity, it did take some time for him to get any sort of recognition. Historian Jean Welter mentions in his book Auf den Spuren des blannen Theis for instance that a weekly publication about national literature wrote about Theis in 1869 that he was an "old, blind fogey" before going on to shred his performances in very colourful language, calling them "unclean" and "without any poetical decorum or higher appeal". Other publications did not hold back either, and while most of them insisted that he was completely forgotten (or as one priest put it "the best thing about his poetical creations is that they have been lost to the ocean of oblivion") they all seemed to have a hard time not writing about him.

Despite all of that, Theis has become without a doubt one of Luxembourg's most recognisable historical figures. His songs remain popular to this day and are sung by school children and drunkards at local wine festivals alike. His hometown Grevenmacher has also not forgotten its blind musician and a statue of the violinist by artist Will Lofy has found its place in the city's pedestrian zone.