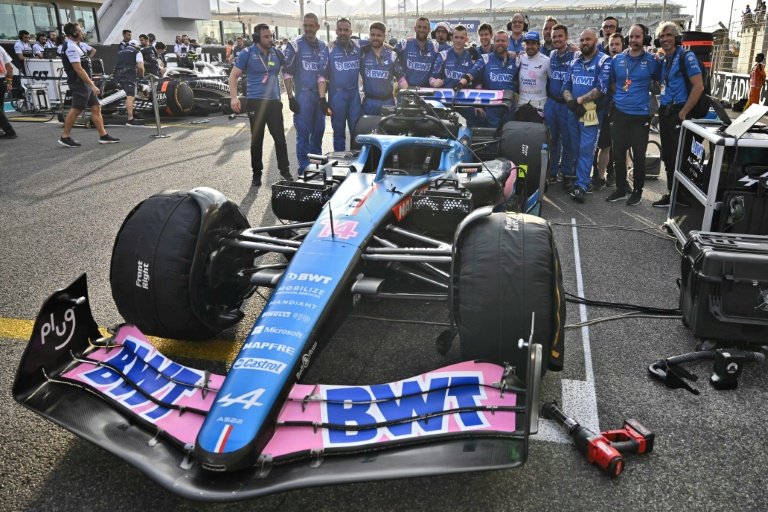 Fernando Alonso (front row, centre-R) poses for a group picture with his team ahead of his final race for Alpine at the Abu Dhabi Grand Prix / © AFP

Two-time world champion Fernando Alonso said he was "disappointed" for himself and Alpine’s fans after being forced into a mechanical retirement in Sunday’s season-ending Abu Dhabi Grand Prix.

The 41-year-old Spaniard, in his last race for the Anglo-French team before joining Aston Martin as successor to retiring four-time champion Sebastian Vettel, was fighting for a points finish until halted by a suspected water leak.

It was his seventh enforced retirement of the season.

"I’m disappointed, for sure,” he said. "I mean millions of people are disappointed now – our fans too. It’s the way it is.

"It’s been a very unlucky season in terms of... well, not unlucky, I think we were not prepared reliability-wise and I think it’s the sixth or seventh DNF. But a couple of races don’t count as a DNF.

“In Australia, we had a problem in qualifying, in Austria, the car didn’t start the sprint race … and some other races that we were not ready to compete.

"It’s a little bit sad to finish like that, but it’s the way it is.”

Alonso is set to test for Aston Martin in Abu Dhabi on Tuesday.

“That’s the best thing today,” he added. “Tomorrow, starting with this project, with a seat fit, meeting a few people, then on Tuesday testing the car, will be hopefully a good chapter.

“All the bad luck of this year, hopefully, compensates next year!”

Despite his exit, Alpine successfully finished fourth in the constructors’ championship behind Red Bull, Ferrari and Mercedes, as Esteban Ocon was seventh behind McLaren’s Lando Norris.

Alonso will be replaced at Alpine next season by Alpha Tauri’s Pierre Gasly who was 14th in his final race with the team.

Daniel Ricciardo, in the second McLaren, finished ninth in his final outing with the team.

He said afterwards that he intended to take time off in 2023 but he was set to sign a deal with Red Bull to be a reserve and test driver.

He stressed that he would not go to all of next season’s scheduled 24 races.

“Otherwise, I may as well be on the grid somewhere. I made it clear that I need some time off for myself to get away a little bit. But I’ll be around and try to stay involved.”

Ricciardo is to be replaced at McLaren by fellow-Australian rookie Oscar Piastri.

Nicholas Latifi also departed without finishing his final race for Williams, the Canadian one of three non-finishers.

He is due to be replaced next season by Logan Sargeant who successfully completed his Super Licence qualification at the Yas Marina Circuit and will be the first American driver in F1 for eight years.

Sargeant, 21, finished the final F2 race in fifth position to secure fourth place in the championship and win F2’s rookie of the year title.