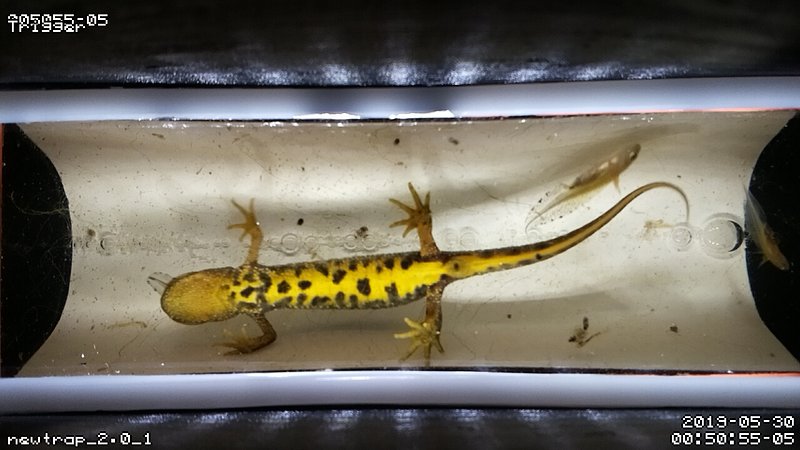 Researchers have developed a photo trap that allows inconspicuous monitoring of newts, an important species of biodiversity. To what extent is this development promising?

Newtrap is a new observation method developed by the Luxembourg Institute of Science and Technology (LIST). It combines a custom-made camera trap with automated data processing for improved monitoring of newts. Traditional observation methods are known to be time consuming, expensive and conspicuous. But what is the point of observing newts and to what extent is Newtrap innovative?

Certain newt species are bio-indicators: their presence or absence represents the quality of the environment in which they live. This characteristic is particularly important for biodiversity monitoring and biomonitoring studies. If the number of a bioindicator species declines or equals zero, this means that the ecological conditions necessary for the conservation of that species are not or no longer present. These requirements are also often shared with other species. According to Xavier Mestdagh, research engineer working on LIST's Newtrap project, the crested newt for instance is a so-called umbrella species. Protecting its habitat allows the conservation of many other species that live in the same environment as other amphibians, such as the grass frog or insects.

Conventional observation methods consist of setting up fish traps to catch individual animals. These methods are very time consuming, tedious and conspicuous. The researchers have to place the traps, take measurements and repeat the process. Mestdagh explains that in the case of crested newts, for example, researchers have to photograph the abdominal pattern of each captured animal. Just like our fingerprints, this pattern is unique. Mestdagh adds that this is particularly useful for assessing the number of animals in a population, i.e. their size, without risking the same newt being counted more than once. The LIST researchers therefore had the idea of developing a new observation method.

The camera trap is triggered by movement and photographs (same angle, background, light, distance) the animals coming and going in the same way. This provides researchers with more data, which is more harmonised, of better quality and has a higher spatial and timeless resolution. Without intrusive handling of the amphibians, Newtrap also provides new information about the behaviour of newts and even about other species (e.g. grass snakes, leeches).

This new method also uses artificial intelligence (AI) for data management. To do this, the researchers have classified a large amount of data by species, sex and abdominal pattern. They then incorporated this information into an algorithm so that the AI could automatically recognise these features. Species and sex are already identified with a reliability of over 90%. The researchers are now working on improving the automatic recognition system of the abdominal patterns and on increasing the lifespan and robustness of the camera trap.

This new patented observation method (LU93388) was financed by the National Research Fund (FNR) under the  JUMP - Proof of Concept (POC) programme and was the subject of a market study which attracted considerable interest at both national and international level. With more than 30 newt species in Europe and even more in North America, the introduction of Newtrap could support the automatic monitoring of many species. Mestdagh and his colleagues now want to establish an industrial partnership to move from a prototype to an operational method for the largest possible number of observers.