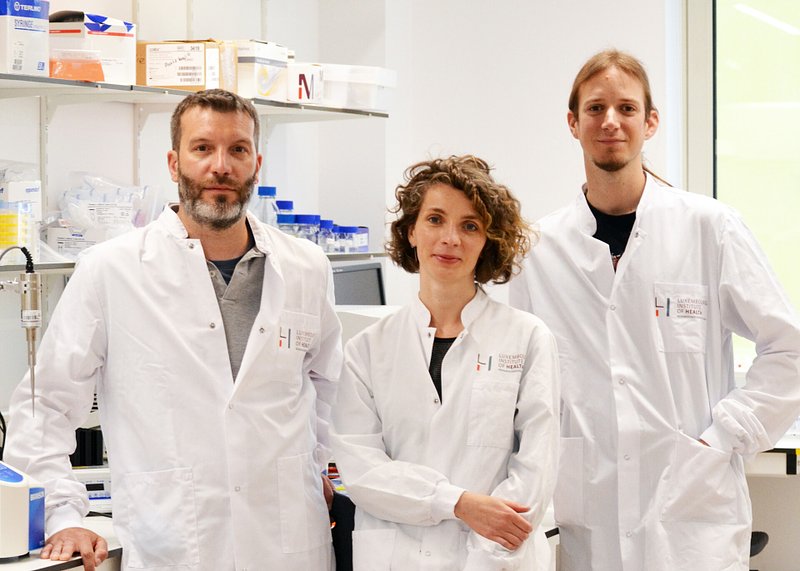 Researchers at the LIH are developing a new molecule with potentially analgesic effects for the development of alternative treatment methods.

Researchers at the Luxembourg Institute of Health's Infection and Immunity department have developed a molecule potentially capable of boosting the analgesic and mood-lifting qualities of so-called opioids.

Opioids are small types of protein which are created naturally in the brain. They influence a variety of emotions and bodily processes, e.g. euphoria, affection, motivation, but also stress and pain responses. They display their natural analgesic and mood-lifting effect by interacting with four specific opioid receptors ("molecular switches") found on the surface of the brain.

The revolutionary molecule developed by the Luxembourgish researchers, which they have decided to name LIH383, connects to a fifth and until now barely researched and unusual opioid receptor in the brain and blocks the latter. The LIH383 molecule is of major importance to the development of a new category of drugs for the treatment of acute and chronic pain, depression, and even brain tumours.

How do opioid-based painkillers such as morphine & co work?

The opioid system is complex and how it works is still not entirely understood. As a stress response, our body releases its own opioids, e.g. in order to suppress a pain or hunger response. However, bodily opioids such as endorphins can also bring about euphoria. The bodily opioids are released in response to injury, emotional stimuli, but also UV light. The opioids connect to opioid receptors on the surface of nerve cells, mainly in the brain, but also in the spinal cord and the intestines.

Prescription opioids, which are synthetic in nature and usually used to treat severe pain, such as morphine, oxycodone, and fentanyl specifically target and activate the opioid receptors. The natural "pain response" is thus no longer being transmitted which in turn changes the experience of pain and as a consequence pain is alleviated.

However, despite their potency, these painkillers often come with side effects such as addiction and respiratory problems. This is why there is an urgent need to find new drugs for pain relief – drugs with different mechanisms of action and a reduced risk for complications. This is especially relevant against the backdrop of the current "Public Health Crisis" (the so-called "Opioid Crisis"), which in turn is a result of the increased misuse of synthetic opioids and the addiction to such drugs.

A new molecule and an unusual opioid receptor

It is in this context that the research team from the LIH led by Dr Andy Chevigné developed the new LIH383 molecule. LIH383 connects to an until now barely researched and unusual opioid receptor called ACKR3.

Chevigné explains: "We were able to show that the ACKR3 receptor can bind a wide range of opioids, especially in the central nervous system (brain, spinal cord), and negatively regulates the opioid system. It does this by 'capturing' the natural opioids which usually bind to and activate the four classic opioid receptors". This means that the ACKR3 receptor is reducing the availability of natural opioids in the nervous system and thus indirectly lessening their analgesic and anxiety reducing activity.

A new kind of pharmaceuticals?

The new LIH383 molecule binds to ACKR3 and blocks this receptor. This means that it prevents the latter from capturing the naturally released opioids. The overall effect of LIH383 is thus to allow for a greater presence of natural, analgesic, and mood-lifting opioids in the brain.

Chevigné recaps: "Essentially, our results revealed an until now unknown mechanism for the fine-tuning of the opioid system. We also showed that by targeting ACKR3 – the fifth member of the family of opioid receptors – it is possible to influence the availability of natural opioids in a therapeutic way".

The two lead authors of the study, Max Meyrath and Dr Martyna Szpakowska, state: "We expect LIH383 to play a pioneering role in the development of a new kind of drugs for the treatment of pain and depression. This in turn will offer an innovative and autonomous therapeutic approach for overcoming the Opioid Crisis".

Chevigné explains: "The molecule is a sort of prototype which we have so far only tested in so-called 'ex vivo' models, in particular in tissue sections from rat brains. It goes without saying that we have to conduct a lot more experiments in vivo (i.e. in a living organism) and apply corrections".

He continues: "We are currently working on the development of the second generation of the LIH383 molecule and have initiated talks about the best approach to continue this programme, i.e. partners (private, public), type of models (in vivo), and type of financing".

According to Chevigné, it is now necessary to research what influence the manipulation of the ACKR3 receptor has on pain, stress, and addiction as well as possible side effects both on the opioid system and the chemokine system. This is because ACKR3 also captures chemokines – messenger substances which play an important role in many areas, especially the immune system.

Besides alternative treatment methods for chronical pain, stress, anxiety, and depression, the results could possibly also open up opportunities for cancer therapy. The scientists are even suspecting that the molecule could help to slow down tumour growth and the formation of metastases in brain tumours. This would improve the prognosis of affected patients.

When asked about this, Chevigné responded: "We have been researching ACKR3 in the context of glioblastomata (i.e. brain tumours) for over six years. We know that more ACKR3 is present in glioblastomata and also in blood vessels connected to the tumour. We also know that therapeutically targeting the receptor brings about a positive effect. However, we haven't tested LIH383 on glioblastomata before, but we would like to try that in the near future".

From basic research to practical applications

Chevigné states: "Initially, we developed LIH383 to prove that ACKR3 is a so-called 'scavenging receptor', i.e. is able to capture opioids. When we did that, we quickly recognised its potential as a prototype of a new class of therapeutic molecules".

The head of the department of Infection and Immunity at the LIH and co-author of the study, Prof Markus Ollert, concludes: "This is an impressive example of how basic research can be applied with tangible advantages for the patients and lead to better clinical results. We owe the success of our work solely to the generous and tireless support by the National Research Fund, the Ministry of Higher Education and Research, and the non-profit initiative 'Télévie'".

Dr Andy Chevigné, head of the area of Immuno-Pharmacology and Interactomics within the department of Infection and Immunity at the Luxembourg Institute of Health (LIH), published the research results alongside his team in the renowned international journal "Nature Communications" on 19 June.