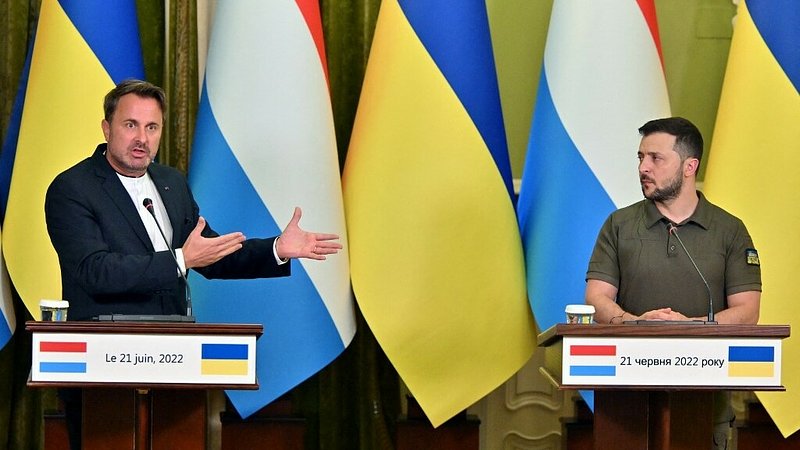 Xavier Bettel (left) with Volodymyr Zelensky during his trip to Ukraine in June 2022. / © SERGEI SUPINSKY / AFP

On 24 February 2022, Russia invaded Ukraine. Eleven months later, where does the conflict stand and what is Luxembourg's position?

For almost a year, the war in Ukraine has been putting Luxembourg's pacifist character to the test.

"It is not just the 'Ukrainian war', it is also the defence of the values for which many people have died", said Luxembourg's Prime Minister Xavier Bettel during his visit to Kiev on 21 June last year.

"It is our moral obligation to support the Ukrainian people in their fight for freedom", the PM then declared during his state of the nation address in October. "We live in freedom today, because not too long ago, other countries did not abandon us," stressed the politician from the Democratic Party.

After close to a year of fighting, the war in Ukraine has left nearly 180,000 people dead or wounded in the ranks of the Russian army, and 100,000 on the Ukrainian side. This does not include an estimated 30,000 civilians who were killed, recently explained Norwegian army chief Eirik Kristoffersen in an interview with TV2.

The figures do not take into account the millions of Ukrainian refugees forced to leave their country.

Failing to use its diplomatic experience with an invader that does not want to listen, Luxembourg eventually took a more decisive position.

Over the past eleven months, the Grand Duchy has provided Ukraine with more than €75 million in lethal and non-lethal equipment. It has further embarked on a two-year mission to train Ukrainian military personnel.

And this military commitment will continue, as will humanitarian aid, such as the 'Ukraine is calling' campaign launched by non-profit organisation LUkraine, which has already raised more than €520,000 to purchase emergency vehicles for Ukraine.

"If we stop supplying arms to Ukraine, the war will be over. But under what conditions? Under horrible conditions! Russia would win and then it will not stop, it will continue", judged Luxembourg's Minister of Foreign and European Affairs Jean Asselborn at the European Foreign Affairs Council on Monday 23 January.

Minister Asselborn continued: "That is why there is only one solution, one course of action: we must help Ukraine defend itself against Russia. In my opinion, the war will end when Russia sees that it cannot win this war."

Minister of Defence François Bausch shares the same position, arguing in an interview with RTL Radio on Monday morning that Luxembourg will continue its military effort in favour of Ukraine and that the conflict will likely end in negotiations.

On the economic front, Luxembourg has taken full part in the western sanctions by freezing several billion euros on its territory. This commitment came at a cost as the government has been busy dealing with the repercussions of the war itself: galloping inflation, control of energy prices, only to name a few issues.

This explains the numerous measures put in place throughout the year to protect the purchasing power of Luxembourgers and the stability of businesses.

By the end of November, some 4,902 Ukrainians had applied for temporary protection in Luxembourg. This is an emergency status put in place in Europe to react to the massive influx of refugees. It was recently decided to extended it for another year, until 4 March 2024.