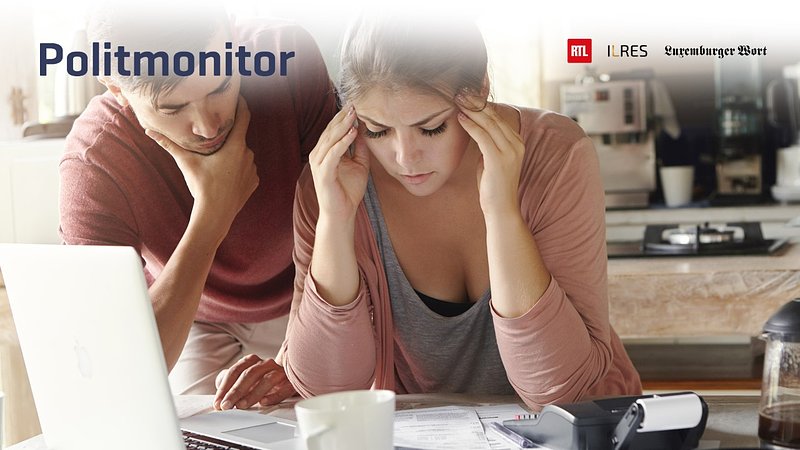 The majority of respondents support tax cuts, but also tax increases for energy producers, high-income individuals, as well as vacant land and housing.

In the second part of the Politmonitor survey, Ilres, in collaboration with RTL and the newspaper Luxemburger Wort, asked a panel of 1,074 people about the financial difficulties they fear, the restrictions they are already imposing on themselves, the measures they would like to see put in place to get through the crisis, and the confidence they have in different institutions.

Which measures are supported by voters?

71% of respondents support the introduction of an excess profits tax on energy producers. 70% of respondents agreed that the tax table should be adjusted for inflation. 67% support tax relief for low and medium incomes and a tax increase for high incomes. 58% approve vacant land taxes, and 53% support imposing a 15% crisis tax on gross household incomes of more than €12,500 per month.

"In general and historically, people naturally favour measures that require others to contribute more than those that impose an additional financial burden on individuals," explained Tommy Klein from Ilres.

When it comes to the tripartite measures that were passed to curb inflation, around half of all respondents think that the government, but also the trade unions, did a good job. However, only approximately one-third of respondents approve of the opposition's work.

According to Tommy Klein, it appears that people feel their interests were better represented during the tripartite in September compared to the previous meeting of the social partners in March.

Klein noted that "these tripartite discussions have strengthened trade unions. The level of trust in trade unions has increased significantly" (from 39% to 52% in six months).

Meanwhile, the DP-LSAP-Greens coalition, which has already passed a slew of measures, has been bolstered by its handling of the energy crisis in particular, and has 55% voter support (+4% in six months). On the other hand, the opposition (CSV, Pirate Party, adr…) is still struggling. While the opposition parties gained some confidence (+4%), they still only attract a third of potential voters, just over ten months before the 2023 national elections.

The Luxembourg Socialist Workers' Party (LSAP), for example, has taken a clear stance against a cap on the index, despite the fact that its electorate strongly supports it (58%). The same is true for the Christian Social People's Party (CSV): A majority (64%) of CSV voters support a crisis tax of 15% for households earning more than €12,500 gross per month.

Whatever concrete measure is chosen in the future, "people think that the right measure will be one that allows those who are worse off to keep more money and asks those who are better off to contribute more," says the Ilres director general.

While the vast majority of Luxembourgers (79%) believe that their financial situation is currently good, more than a third of the population (37%) admit that it has worsened, or even significantly worsened, over the past six months.

The vast majority of the 59% of voters who are concerned admit to struggling to make ends meet at the end of the month, however 44% do not generally have such concerns. The youngest age group, those aged 18 to 34, report having the most difficulties paying their bills.

In spite of all the aid decided at the tripartite meeting at the end of September to combat soaring prices (return of wage indexations, freezing of the electricity price, capping gas prices, etc.) Luxembourg's households are worried. Not all of them, but 43% of those surveyed say they have to cut back on expenses because of the continuing high inflation.

These households have decided to limit their spending and are focusing on three main areas: holidays, eating out, and heating / electricity consumption. But they also spend less on clothes, transport, and even food.

An interesting side note at the end: Ilres also asked participants, how bad they think it would be for the economy if Luxembourg were to lose its Triple A rating. 51% think this would be "bad" or even "very bad". 31% think it would be "not so bad" or "not at all bad". Only 19% stated that they could not tell.

The third instalment of the survey will be published at 6pm on Thursday.

Details on the method and questionnaire used for this survey can be found here or at Alia.lu