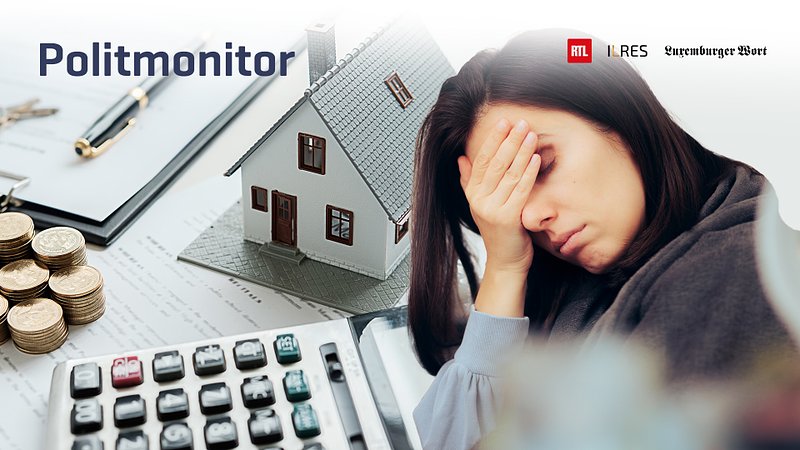 People are generally more worried than they were six months ago, according to the latest survey conducted by Ilres, in conjunction with RTL and the Luxemburger Wort.

The survey respondents were made up of a representative sample of 1,072 Luxembourgers aged over 18, who were contacted by telephone between 7 and 14 November.

Luxembourgers are still mostly concerned over access - or lack thereof - to affordable homes. Three-quarters of participants said housing was one of their main concerns, followed by rising energy prices and inflation. Over half of the group said they were worried about the increase in traffic, and the consequences of climate change.

"Everyone is worried, of course, but the concerns vary depending on the respondent's age and the topic in question," explained Tommy Klein from Ilres. This means that young people may seem to worry less about the economic situation or social cohesion than older people.

Two-thirds of respondents said social cohesion was "weak", while half of the group perceived society as being unfair. 44% of respondents said society was fairly balanced. According to Klein, however, the term "coexistence" is viewed differently, with some seeing it as a coexistence of different cultures and backgrounds, while others saw it as a question of finances and feelings of injustice.

Klein added that this survey showed more pronounced concerns than the last, with more pressing financial issues on people's minds as next year's elections draw closer. People are also expressing concern over the widening gap in living standards, as well as worries over their children's future.

Concerns over security in Luxembourg have grown more than any other aspect. In May 2022, 30% of participants indicated that security was a concern; in November, this percentage reached 43%. Klein explained this increase was down to the fact that many political parties are focusing on the topic of security, while social media networks have contributed to the general sense of worry.

The first instalment of the Politmonitor survey showed that three-quarters of participants felt they were generally well taken care of by staff in the health sector; however, just 17% said that the Grand Duchy had sufficient personnel levels within healthcare.

The second instalment of the survey will be published on Wednesday, with more detail on wages, financial situations, September's tripartite meetings, and participants' thoughts on political proposals such as adjusting tax brackets in line with inflation, or another index.

Details on the method and questionnaire used for this survey can be found here or at Alia.lu