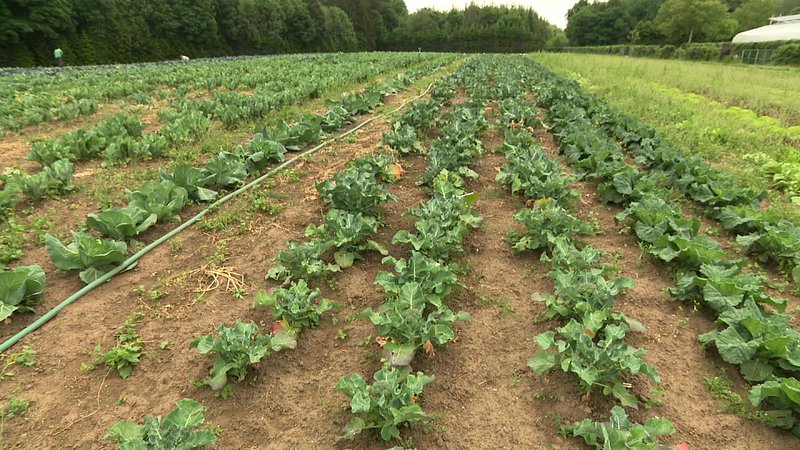 For over a month, Luxembourg's vegetable growers have been forced to water their fields with costly drinking water due to a general lack of rain.

Jean-Claude Muller from Contern explained that he was left with no choice but to water his salads with tap water: "Newly-planted salads need to be watered between one and two hours, which is best done overnight or during the early morning hours. If we were to do it while the sun is shining, most of the water would evaporate."

Claude Kirsch from Eich is similarly plagued with the ongoing drought.  His staff had to wait three weeks longer than scheduled before being able to plant cabbages: "It was simply too dry, they would not have made it."

Kirsch also confirmed that salads in particular require more water than used to be the case: "Salads never needed to be watered. However, by now we need about eleven to twelve litres per square metre, which raises costs by 30 to 40 cents for the same surface area."

Muller, who is also president of the Luxembourg Gardening Association, elaborated that there are other factors contributing to the rise in costs for vegetables: "The price of water is consistent, we only need more of it. Fertiliser, however, has become five times as expensive as it used to be. Rent costs have also gone up, which are all factors with repercussions on the prices."

In light of the competition from foreign producers, Luxembourg's farmers cannot pass on their expenses to customers. Muller thus hopes that they can find alternative solutions, such as rainwater basins, to help get them through droughts.

However, Kirsch has one such installation near his farm, but in the absence of rain, it is of little use: "The municipality already had to fill up the basin once this year."

Short and heavy rainfalls, such as the Grand Duchy has experienced over the last couple of days, also fail to bring about the desired relief, conclude farmers, who remain concerned about the lack of regular precipitation.