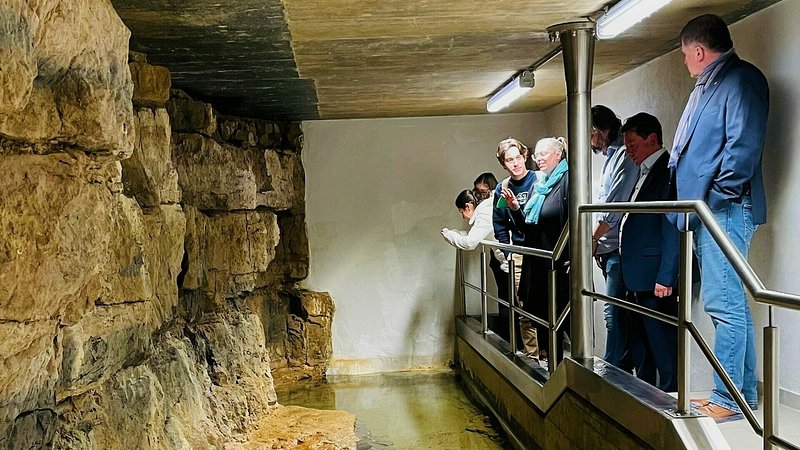 World Water Day has been celebrated annually on 22 March since 1993. Over 50 percent of Luxembourg's drinking water comes from groundwater. It remains a limited resource, which is continually under threat from a variety of sources, one of which is climate change, says Carole Dieschbourg, Minister for the Environment:

"We experiencing increased droughts over the past years. We've had one slightly more normal year, but previous years were extremely dry. In addition, the rainfall we have had often came at the wrong time and was absorbed by vegetation, so that groundwater sources could not adequately refill."

Another threat are nitrate and pesticide residues in the ground. This leads to some groundwater sources being unusable over longer periods of time. As a result, the government has designated special protection areas which are designated by signage or are closed off.

The government wants to put an end to the treatments currently used in agriculture:

"We want neither pesticides nor their degradation products. Metazachlor ESA is a breakdown product of metazachlor that was not considered in Luxembourg for the longest time. We want no pesticides and no herbicides. And we have to make sure we have no leaching, like with nitrates."

Water suppliers work together with farmers to enable the transition to more resource friendly agriculture. Financial support for farmers has also been announced on the national level.

The Syndicat des Eaux du Sud is responsible for the operation of over 60 sources and supplies 230,000 residents with clean drinking water. This requires stringent checks and treatment plants. Frank Wersandt explains the process:

"As an example you have our three sites Dondelange, Koerich and Réibierg. Each site has a disinfection using chlorine dioxide. Then we have ultra filtration, these can filter out bacteria and viruses. Another problem we have in some places are metabolites with pesticides. You can see the three containers on this image, those are activated carbon filters. That's the only way you can still get [the metabolites] out."

The use of pesticides must also end in private households, says Carole Dieschbourg:

"This can mean choosing the right cultivation in your garden. You can try out alternatives that our grandparents already knew. And you can choose local and pesticide-free produce in shops, too."

Report on the state of groundwater

A report published Tuesday by the Ministry of the Environment together with the Water Management Administration on the state of our groundwater shows there is considerable potential for improvement.

Around 100 groundwater resources cannot currently be used because the quality is too low for human consumption. Some 13,000 cubic meters per day, enough for around 65,000 people, are chemically contaminated by human activities such as agriculture. Luxembourg has a total of around 250 groundwater resources, used by  53 municipalities and 5 drinking water syndicates.

Carole Dieschbourg considers it a "great challenge" that so many sources are currently unusable, especially because Luxembourg's requirements in drinking water will only increase, due to demographic and economic changes, but also climate change.

Everyone can contribute, notably by saving water. Showering instead of running a bath, turning the tap off while brushing your teeth or cleaning your car a little less often are some of the easier measures you can take.