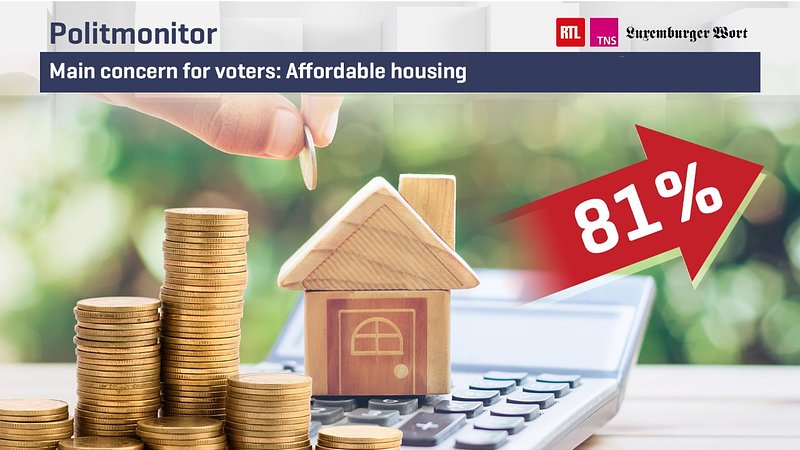 TNS Ilres has conducted a Politmonitor survey to gauge the public's feelings about how the country has coped with the Covid-19 pandemic. The survey was conducted on behalf of RTL and Luxemburger Wort.

The study looks at the state of society in Luxembourg, voters' most pressing issues, as well as how they believe the government to have handled the pandemic.

First, half of respondents believe that Luxembourg's society is "unfair". Tommy Klein of TNS-Ilres elaborates that it is often households with higher incomes who are more convinced of a certain sense of justice, while lower income households consider there to be more unfairness. Overall, however, there is a positive trend compared to previous years, Klein says.

Luxembourgers are most worried about the country's housing crisis, followed by increasing traffic on the roads and future opportunities for children. Climate change and the disappearance of the Luxembourgish language, too, are frequent concerns. The pension system and tax fairness generate the least amount of worries, according to the survey. "Affordable housing is clearly the first major issue for all age groups", says Klein.

Whereas during the second wave most people believed the country's economic situation to be a major concern, this is now less of a worry. However, security worries have seen an increase of 5% amongst respondents.

At the peak of the second wave in the autumn of 2020, 35% of respondents believed the government not to be taking the right decisions, but positive responses continuously outweighed the negative throughout 2020 and early 2021.

With regards to the emotional state of the Luxembourgish population after a year of social distancing, face covering and reduced social contact, generally speaking the younger the population the heavier the burden felt. For example, in the age group 18-24, only 27% responded "unaffected", but for the 65+ group this percentage is nearly double at 51%.

Whereas in November of 2020 41% of respondents said the measures were not strict enough, that number fell to 20% in March of 2021. At that time 23% believed the rules were an exaggeration, but only 9% did so in November. The share of the population that believed the measures to be just right always balanced out at around 50%.

Respondents were also asked to what extent they agreed with several statements, ranging from "restaurants and bars reopening" (92% agreed with this), "I'm willing to do rapid tests for more freedom" (75% would do so), "Concerns regarding economic consequences" (68% share this feeling) or "Businesses who profit off Covid should be more heavily taxed" (54%). 75% of respondents believe the Large Scale Testing method to be an important part of the government's strategy.

The survey included 1,127 representative respondents. Details of the survey and the questionnaire of this survey can be found on Alia.lu.