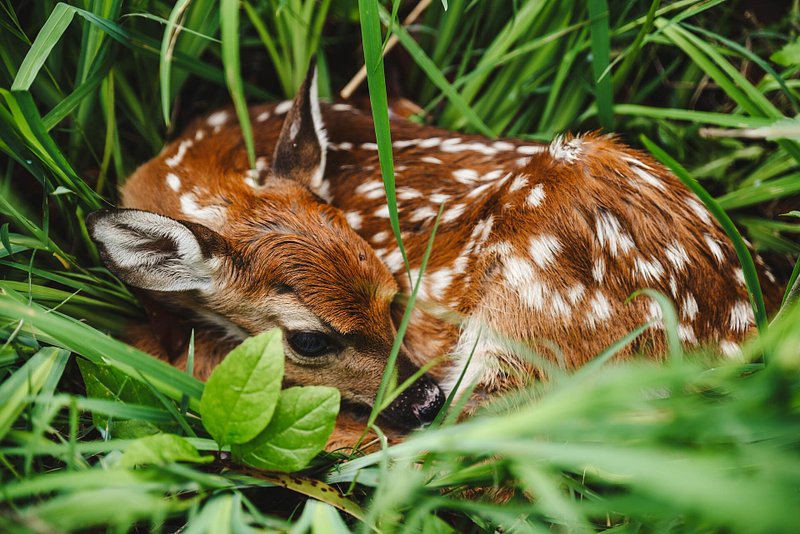 A newborn fawn nestling in the grass. / © Unsplash

Now that summer is around the corner and the grass is high, it is time for farmers to mow their meadows to provide food for their livestock.

This is a time of year prone to certain incidents: wild animals that suddenly jump in front of a mower and lose their lives. This is particularly the case with fawns. Farmers and the association 'Save Bambi' have been trying to fix this problem.

A young fawn, only two to three weeks old, sits in the tall grass, hidden. So well hidden that a farmer in the middle of mowing can simply not see it.

Christian Hahn, a farmer in Roodt-sur-Syre reveals that it has indeed already happened that he accidentally "mowed" one over this way. "Not a nice experience", he states, adding that besides the fact that farmers do not want an animal to die, it is also a potential danger to their own livestock. A dead animal can end up in cattle feed, and if the farmer does not notice it, it can end up poisoning their cattle.

To avoid this, some farmers work with hunters or may call an organisation such as 'Save Bambi', for which Katty Leclere works. The easiest way to find the fawns is with the help of a drone equipped with a thermal camera.

Leclere explains that it the animals are "much easier to detect" that way. In fact, they fly the drone very early in the morning in order to have a clear temperature difference between the ground and the animal. This allows them to detect an animal very quickly, saving time and enabling them to cover as much ground as possible.

Under optimal conditions, it is possible to cover almost a hectare per minute. If the thermal camera detects a difference in temperature, it is displayed on the monitor and the location is pinpointed. Leclere and other volunteers then go to the field itself and either attempt to move the fawn or catch and release it after mowing.

For Hahn, the thermal camera is just one method. On his field, which is directly adjacent to the forest, he regularly finds fawns or other wild animals. There, he likes to use lights to scare deer, or he scours the field with friends and their hunting dogs. Special mowing techniques are also an option.

Hahn states that, in his eyes, every system has its advantages and disadvantages. According to him, it is the combination of these different methods that makes it possible. Farmers always have to consider the means invested in what they find. For Hahn, every fawn he finds "is worth finding".

However, it should also be pointed out that farmers, depending on the weather and the seasons, do not necessarily have the time to put all that effort into every field. And in the end, it is up to each farmer to decide whether he wants to do this work or not.

On Tuesday morning, only one fawn was found, which then disappeared into the forest. But in the last few weeks, several fawns have been rescued before the mower came.